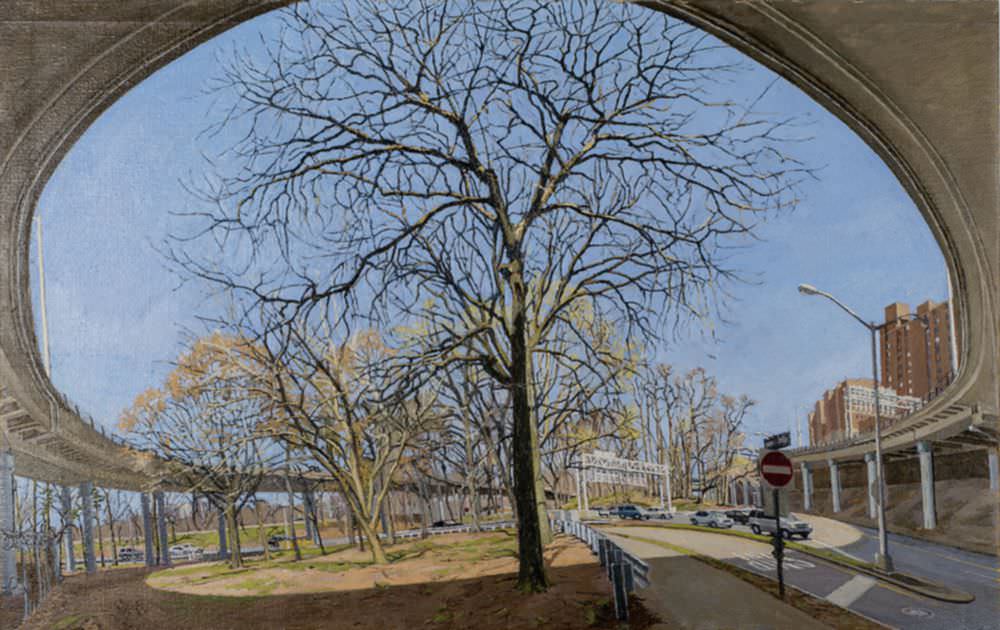 The work of Rackstraw Downes and Malcolm Morley.

His “passion for facts, his desire for exactitude, makes for a sort of urgent dryness, an excruciatingly low-keyed, almost insensible skin-of-the-teeth element of poetry in his painting.” That’s from a lecture by the English born, radically realist American painter— and fine critic—Rackstraw Downes, who has a show of new landscapes, cityscapes, and interiors at the Betty Cuningham Gallery. He was discussing the seventeenth-century Dutch master Pieter Jansz. Saenredam and his paintings of church interiors, which can appear starchy and bland at a glance but, with contemplation, secrete an uncanny intensity.

Downes’s own meticulously descriptive pictures of the woebegone subjects that he favors—industrial zones, Texas deserts, highway structures, the New Jersey Meadowlands—do that, too, with a deadpan restraint that has kept his fan base small but ardent throughout the half century of his career. I’m a member. We cherish Downes’s evidence that painting can be truer than photography to the ways that our eyes process the world: reaping patches of tone and color which our brains combine very rapidly, but not instantly, into seamless wholes. He renders everything in his specialty of long, low panoramas, often encompassing more than a hundred and eighty degrees, which he always paints—on-site, over many sessions— head on, without either perspectival organization or fish-eye distortion. His avoidance of charm in his subjects and suppression of expressiveness in his touch serve the dumbfounded wonderment you can feel when—perhaps rarely enough, in this frantic era—you stop somewhere, look around, forget yourself, and only see. Downes’s is a puritanical passion, burning cold rather than hot but no less fiercely for that.