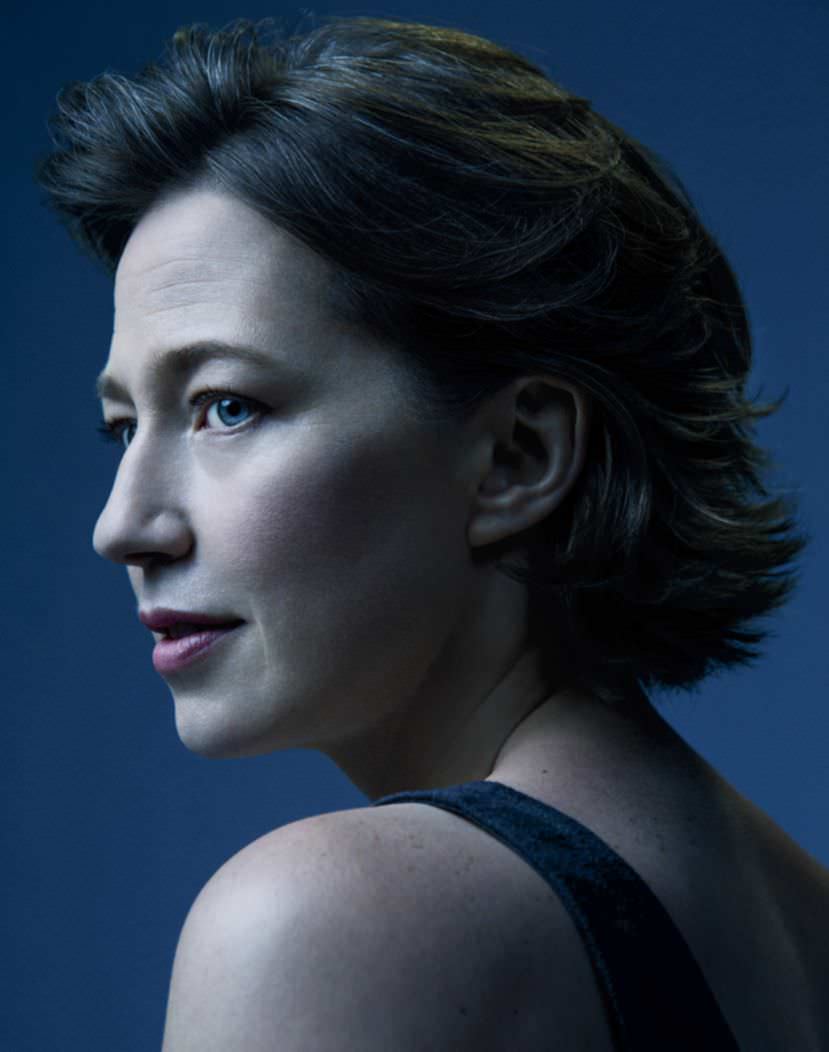 When Carrie Coon was five years old, she would lie awake at night contemplating the apocalypse. “I was so ready for the end of the world,” she said recently. “We weren’t evangelicals or anything, but I knew about the Book of Revelation, and I knew that Jesus was supposed to come back.” Coon was raised Catholic, in Copley, Ohio, and her father had gone to seminary before returning to run the family auto-parts store. “My parents would be watching ‘Johnny Carson’ or whatever, and I’d come out of my bedroom and say, ‘O.K., when is the world ending?’” she recalled. When they assured her that it wouldn’t be during her lifetime, she would say, “But you don’t know that. We don’t know when it’s happening.”

Decades later, Coon landed a role on the HBO drama “The Leftovers,” based on Tom Perrotta’s speculative novel, in which two per cent of the world’s population has spontaneously disappeared in a Rapture-like event, known as the Sudden Departure. The remaining ninety-eight per cent is left dumbfounded, and world religions crumble amid a surge of cults and charlatans. One woman, Nora Durst, has lost her husband and two children: her entire family gone in an instant.

In the novel, Nora spends her days taking long bike rides and cataloguing episodes of “SpongeBob SquarePants,” her children’s favorite show. But Damon Lindelof, whose previous show, “Lost,” ran on ABC for six seasons, and who created “The Leftovers” with Perrotta, decided that, for television, Nora should be more active. “It’s not that her children are dead—it’s that they’re gone in some sort of existential, supernatural phenomenon,” he told me. “She can’t really get to the last stage of grief, because that’s acceptance, and it’s not like she can go the cemetery and visit her kids’ graves. There’s always this lingering desire that they may be back.”

Lindelof told the show’s casting director, Ellen Lewis, that he wanted Nora to have an “unpredictable, dangerous frequency sizzling underneath the surface.” Lewis urged him to attend the Broadway revival of Edward Albee’s “Who’s Afraid of Virginia Woolf?,” in which Coon was playing Honey, the drunken wife of a biology professor. Honey is the smallest part in the four-person play, but Coon managed the near-impossible feat of stealing several scenes from the warring central couple, George and Martha. The Times critic Charles Isherwood, reviewing the production, which began in Chicago, at Steppenwolf Theatre, wrote that Coon “imbues the sozzled Honey with a sweet sympathy and a hint of a backbone.”

Lindelof brought her in for an audition. “There’s nothing more exciting than the first time you see an actor and they’re just that character,” he said. Coon was among the first people cast in “The Leftovers,” along with Justin Theroux, who played the protagonist, a police chief struggling to maintain order in a small Northeastern town. In the pilot, Nora appears in only one scene, giving a speech at a tribute to the Departed. “Who wants to get up in front of a big crowd and say, ‘I am in incredible pain?’” Lindelof said. “There’s actually kind of a performative quality to what Nora is doing, and Carrie intuitively understood that.” As he and Perrotta developed the rest of the season, they found themselves tailoring the scripts to take advantage of Coon’s ability to embody peculiar contradictions: her Nora was blithe yet stricken, rational yet moody, blunt yet self-obfuscating. In Episode 2, the writers put an unexplained handgun in Nora’s purse. A few episodes later, it was revealed that, in her spare time, Nora wears a bulletproof vest and hires prostitutes to shoot her in the chest—apparently, a way of coping with her buried grief. “Carrie gave us latitude to be a little bit nuts,” Lindelof said.

The recent glut of well-funded television experiments has bred a crop of unconventional stars—among them Elisabeth Moss (“The Handmaid’s Tale”), Rami Malek (“Mr. Robot”), and Taraji P. Henson (“Empire”)—whose idiosyncrasies might have stalled their success in movies. Coon, who is thirty-seven, rose up through the Wisconsin repertory-theatre scene—hardly a typical path to stardom. Although she often winds up in roles that revolve around faith and uncertainty, she exudes a Midwestern pragmatism, which she knows can have its own kind of mystery. Her shrewd eyes and inconspicuous beauty allow her to play “ordinary” women—or women who tell themselves they’re ordinary while suppressing an inner wildness or desperation. (As a writer for Vulture put it recently, “Watching Carrie Coon dance right up to the line of losing her shit is one of the greatest pleasures TV has to offer.”) Her characters often seem at once sane and unhinged, either affecting normalcy when they’re quietly imploding or showing startling sanity amid extreme adversity. Last fall, she starred in the Off Broadway play “Mary Jane,” as a single mother managing the needs of her chronically ill child. Instead of pitying herself or revelling in martyrdom, Mary Jane handles her duties with chipper competence. (When another mother warns her, “Your trauma’s written in the cells of your body,” Mary Jane responds, “I feel pretty O.K. most of the time. I’m tired?”) The playwright, Amy Herzog, wrote the script with Coon in mind. “There was something about Carrie that’s so plainspoken,” Herzog told me. “In a story like that, you tend to want to leap to the inspiring lesson, and Carrie had a way of dwelling in the experience without doing that. She’s genuine without being syrupy.”

On “The Leftovers,” Nora began as a secondary character, but in the course of three seasons Coon so decisively took over the show that the last episode was titled “The Book of Nora.” Lindelof, who many people thought had botched the finale of “Lost,” was under pressure to wrap up “The Leftovers” in a way that wouldn’t inspire its small but fervent fan base to take up pitchforks. The job was left largely to Coon, who was given an eight-minute monologue that didn’t so much solve the enigma of the Sudden Departure as leave viewers with a question: Did they believe Nora’s explanation or not? “The show at that point was so much about faith, and we wanted to ask our audience if they could have faith in Nora,” Perrotta said. “We understood that we were going to rely on Carrie’s ability to deliver this monologue, and, oddly, as writers, that created a real sense of confidence on our part, because we knew that we were handing it over to a master.”

As the last season of “The Leftovers” aired, Coon also starred in the second season of FX’s “Fargo,” as a folksy policewoman named Gloria Burgle—a variation on Frances McDormand’s character from the original Coen-brothers movie. Its finale, too, was ambiguous and rested on Coon, who faced the season’s arch-villain, an ostentatiously corrupt British businessman, in an interrogation scene that turned surprisingly philosophical. Like McDormand, Coon had the difficult task of creating an understated heroine driven more by common sense than by raw emotion or you-go-girl defiance. At the end of 2017, Entertainment Weekly hailed Coon’s “year of dominating prestige TV,” and she was nominated for an Emmy, for “Fargo,” alongside Jessica Lange, Susan Sarandon, Reese Witherspoon, and Nicole Kidman.

In her early career, Coon was often cast in melodramatic roles, such as Eugene O’Neill’s Anna Christie. “My family was always wondering why I ended up playing people who were mentally ill, insane, downtrodden, and a little crazy,” she told me. “I think what they don’t understand is that most female parts are written basically as hysterical women. Drama comes from crazy if women are involved. And that’s only now starting to shift.” She continued, “We haven’t evolved a hero story that’s female. We’re always trying to fit women’s stories into this male structure, which is this rising action, this powerful conflict, and this falling action. And I think a female hero story is not that. It’s something else. Women are trying to recover their voices, which is a much quieter, deeply existential, and frustrating journey.”

Coon described her role in “Who’s Afraid of Virginia Woolf?” as having launched the rest of her life. When she auditioned, in 2010, she was obscure even in Chicago theatre circles. Four years out of graduate school, she was making money playing moms in TV commercials, proofreading dissertations, doing motion-capture work for video games, and, for a brief time, meeting strangers in parking lots at all hours, for an on-demand H.I.V.-testing service.

In the days leading up to her audition, Coon went on YouTube and watched one of Uta Hagen’s master classes on acting, in which Hagen gives advice on how to play drunk. (Don’t act loose and chaotic; act like you’re trying that much harder to be precise.) “I spent some time before the audition in my apartment in a slip, with my hair in rollers, with a little cigarette, and I got some brandy or some port wine,” Coon recalled. “I didn’t get drunk, but I would just sip it throughout the day—because I had nothing else to do—and make a grocery list. I really wanted that part.”

At the callback, she met Tracy Letts and Amy Morton, who were playing George and Martha. Both were major figures at Steppenwolf, the mother ship of Chicago theatre. Letts, now fifty-three, is the Pulitzer Prize-winning playwright of “August: Osage County,” which premièred there in 2007, and Morton starred in its original run. Days later, Coon was in a bikini, about to go in for a beer commercial, when her agent called to tell her that she’d been cast as Honey. The revival opened in Chicago in December of 2010 and moved to Broadway eighteen months later. By then, Coon and Letts were a couple. They married in August, 2013.