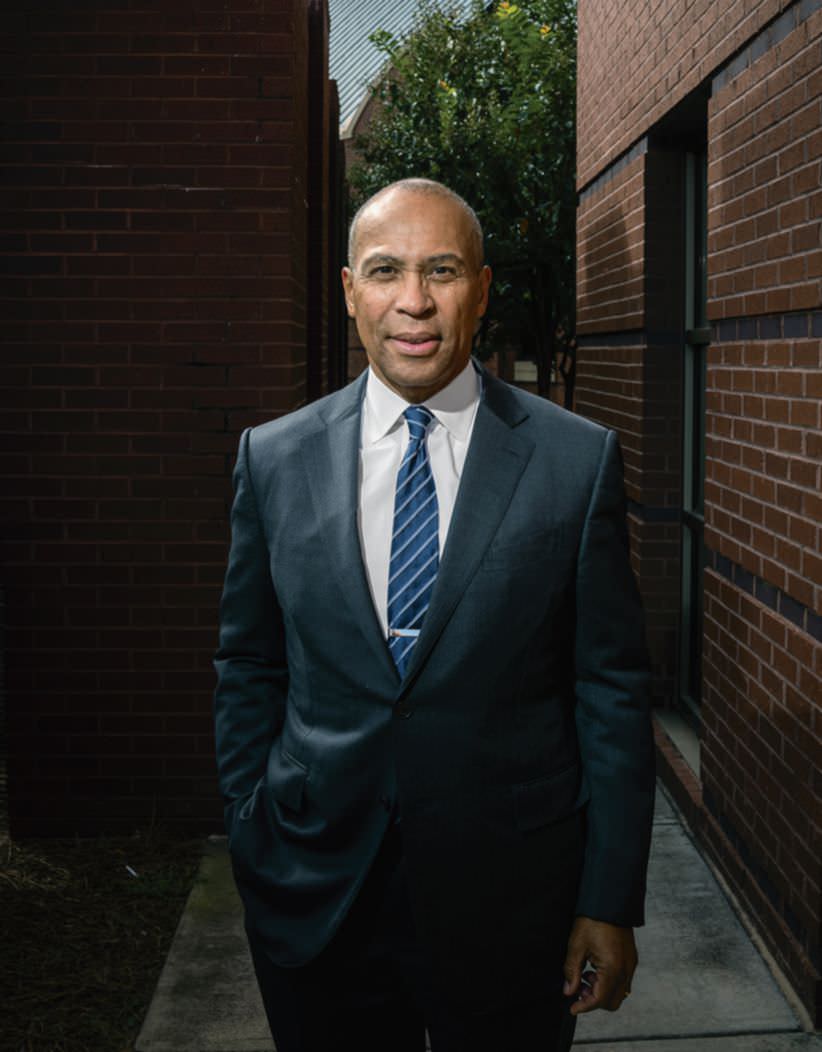 Can an Obama acolyte be elected?

On Election Night last week, Deval Patrick, the former governor of Massachusetts, went out to dinner with his wife, Diane, near their apartment, in Boston’s Back Bay. They propped up their iPads on the table, trying to synchronize their schedules after a hectic couple of months. On weekdays, Patrick had been on the road for his job, as a managing director at Bain Capital, the venture-capital firm founded by his predecessor as governor, Mitt Romney. On weekends, he had travelled to a dozen states, to campaign for Democratic candidates in the midterms, and, in the process, to generate the kind of good will and name recognition that could help him if he chooses to run for President in 2020. Diane, meanwhile, had been winding down her law practice, as a management-side labor lawyer at the major Boston firm Ropes & Gray, where she had recently given up her partnership after working there since 1995. Back at home, after dinner, Patrick took a quick look at the election results, and then turned in early, rising, as is his custom, at dawn, to take stock.

“Election Day was better than the day before,” he told me, after he had absorbed the results. Patrick has a high, rasping voice, and sounded upbeat, as he usually does. “Control of the House is now in responsible hands. And it’s historic, and good for America, that so many of them are diverse, and women, and servant leaders”—that is, military veterans who were seeking political office. On his travels this fall, Patrick had sought out candidates campaigning in districts “where Democrats had not been competitive in a long time and were running at the grassroots level,” he told me. He saw this as an electoral opportunity for his party and as a reflection of the values he’s tried to espouse in his political career, which has so far consisted only of his two successful races for governor. “I think there is real power when you show up, when you respect people enough to ask for their votes,” he said. Several of the congressional candidates, such as Joe Cunningham, in South Carolina, Lauren Underwood, in Illinois, and Colin Allred, in Texas, came through with upset victories.

“On the downside,” Patrick went on, “there was no political price paid for overt racist appeals, in Florida, in Georgia, to a certain extent in Texas.” Ron DeSantis, who won the governorship in Florida, had said on Fox News that the state should not “monkey this up” by electing Andrew Gillum, a black progressive; in both Florida and Georgia, voters received racist robocalls. “We are a great nation because we are good,” Patrick said. “We are a nation that, by design, is supposed to have a conscience. We can either embrace that or not, and that’s the right frame for the policy questions we face. There are many ways in which the other party chooses outcomes that are cruel and unfair. But we have to make choices that reflect goodness— but that doesn’t mean soft. It means firm, rule-of-law-based choices for opportunity and fair play.”

Patrick has no illusions about the difficulty he will have distinguishing himself from the crowd. As governor from 2007 to 2015, he was little known outside New England, and he hasn’t spoken much in public since. Compared with Joe Biden, Bernie Sanders, and Elizabeth Warren, he is practically a nobody. He is African-American, but so are Senators Cory Booker, of New Jersey, and Kamala Harris, of California. In 2020, Steve Bullock, of Montana, John Hickenlooper, of Colorado, and Terry McAuliffe, of Virginia—all possible candidates—will, like Patrick, be former governors. Patrick is a businessman, but so are Michael Bloomberg (Bloomberg L.P.), Howard Schultz (Starbucks), and Tom Steyer (venture capital in San Francisco). Even within his own state, he is one of five potential candidates, along with Warren, John Kerry, and Representatives Joe Kennedy III and Seth Moulton.

Still, Patrick would enter the race with one significant distinction: he is a kind of political heir to Barack Obama, and enjoys broad support from people close to the former President. Valerie Jarrett, Obama’s former senior adviser and still a close friend, told me, “Deval would make an outstanding President. He’d make a terrific candidate.” She added, “President Obama and Deval are very much alike in terms of their core values, what drove them into public service, their willingness to lend a hand, the responsibility to give back. I think they share a basic philosophy about what it means to be a good citizen.” Obama and Patrick also have in common roots in Chicago, Ivy League educations, and complicated relationships with largely absent fathers (which both men have chronicled in memoirs that feature youthful pilgrimages to Africa). They espouse a politics of unapologetic idealism, with a largely moderate, center-left orientation. On the stump, both are part teacher and part preacher. “Deval is a very genuine person, a very empathetic person,” David Axelrod, who has been a strategist for Patrick as well as for Obama, told me. “He is a guy who makes people feel comfortable. He’s very principled, you can see that—just like Obama.”

The election last week punctuated a season of political and societal cataclysms—the Kavanaugh hearings; the pipe bombs sent to President Trump’s critics; the murder of eleven congregants in a synagogue in Pittsburgh. Trump used his campaign appearances to inflame his supporters with lurid appeals to their fear of immigrants and other outsiders. The events gave Patrick and his potential Democratic rivals the chance, as they campaigned around the country, to demonstrate how they respond to the political frenzy of the Trump era. For his part, Patrick tried to turn down the heat. While enthusiastic for the Democratic candidates by his side, he kept his message positive, and warned against excessive negativity. In this, too, he was echoing the demeanor of No-Drama Obama, who showed little interest in channelling his supporters’ anger; hope, not hate, was his message. And yet, in the Trump era, for many Democrats thoughtful diffidence is out, and rage is in. Eric Holder, Obama’s former Attorney General and yet another possible Presidential candidate, responded to the fall’s events by amending Michelle Obama’s famous dictum of 2016. “When they go low,” Holder said, “we kick them.” Patrick, by contrast, went high.

In mid-September, I met Patrick in New Jersey, where he was campaigning for Josh Welle, a thirty-nine-year old Navy veteran running a campaign to unseat the state’s longest-serving congressman, a Republican named Chris Smith. (Welle lost by twelve points.) That afternoon, Patrick and I sat down at a diner in Asbury Park. In Washington, Brett Kavanaugh was being confirmed as a Justice of the Supreme Court, and Patrick explained his opposition to the nomination. “Some of it is very personal,” he said. In the confirmation hearings, Kavanaugh had been accused of sexually assaulting Christine Blasey Ford when he was seventeen. In 1993, Patrick’s brother-in-law was convicted of raping Patrick’s sister, and Diane has talked openly about being a victim of domestic abuse during her first marriage. “I can confirm that the experience of not being believed or having the experience not taken as seriously or treated as seriously is extremely painful,” he said. He spoke with sorrow and emotional distance, and, notably, didn’t denounce Kavanaugh directly, or Trump for choosing him.

Patrick’s cerebral style works well before small audiences, like the one he’d faced earlier that day in Spring Lake, a prosperous vacation village on the Jersey shore. Patrick, who is sixty-two, built his political career on gatherings like this one—a “Women for Welle” event for about two dozen people in a living room—and he quickly put the group at ease. “I have to say a word, because most of you don’t know who I am,” he said, to relieved smiles. “All of you are wondering, What the heck are you doing down here?”

He then recounted an abbreviated version of his life story, which, even though he’s told it hundreds of times, remains a stirring distillation of the American Dream. Patrick grew up on the South Side of Chicago, in his grandparents’ two-bedroom tenement apartment, with his mother, his sister, his grandparents, and “various other relatives who came and went,” he said. The family was on welfare much of the time. He went on, “I shared a bedroom and a set of bunk beds with my mother and my sister, so you’d go from the top bunk to the bottom bunk to the floor, every third night on the floor. I went to big, broken, overcrowded, under-resourced public schools. I can’t remember actually having a book of my very own—I always loved to read—until I got a scholarship to a program called A Better Chance, to go off to Milton Academy, outside of Boston, when I was fourteen years old, in 1970—which for me was like landing on a different planet.” There was poverty in Chicago, Patrick said, but there was community, too—a sense of shared responsibility and a desire to “leave things better for those who come behind us.” He paused. “So, yes, this is not my town, this is not my state, but this nation is my community, just as it is yours.”

If there is to be a Deval Patrick Presidential campaign, it will begin in living rooms like this one, probably in Iowa. For Patrick, grassroots campaigning is an ideological imperative. We’d first talked a few weeks earlier, in a co-working space that his political operation uses in Boston. “When I got to Milton, as a fourteen-year-old, I could sense the difference in the environment—that there were fourteen-year old schoolmates of mine who knew they ‘deserved’ to be talked to, and sixty years-old grandparents on the South Side who also knew they didn’t ‘deserve’ to be talked to,” he told me. “And that was a message that politics conveyed, that economics conveyed, and I think it’s a message that modern politics conveys. I think there is actually a political power that comes from showing people that respect.”

In Patrick’s view, Democrats lost in 2016 because they failed to listen. “I would say we get the government we deserve in a democracy,” he said. “And if we want better government we have to engage, and a lot of folks have been disengaging for a long time, and not without reason.” For many people— those without photo I.D., those convicted of crimes, those who must travel a long distance to a polling place—it has become harder to vote. Meanwhile, politics has become, Patrick said, “impersonal and antiseptic.” He went on, “Democrats sometimes make it a lot more about what’s wrong with them than what’s right with us, and I think in this case we didn’t have a very compelling positive alternative, which is especially puzzling when you consider we had perhaps the most qualified nominee ever.”