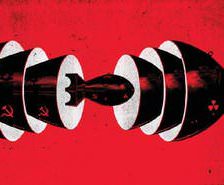 A guide to the intellectual trends that, for better or worse, are informing our national conversation and shaping our lives.

TO THOSE WHO lived through it, the night of November 9, 1989, seemed to mark a new epoch in human history. The Berlin Wall was suddenly undefended, in a single delirious moment that promised to end the Cold War division of Europe. Two years later, the Soviet Union would be dissolved. Elected leaders would govern Russia for the f rst time since the country’s brief democratic experiment of 1917 “Europe whole and free” seemed more than a far-of aspiration: it seemed a work in the making. A quarter century later, Russia under Vladimir Putin is more repressive and more aggressive than the Soviet Union under Mikhail Gorbachev was. It has invaded Ukraine and menaces the Baltic republics. In 2013, Russia spent a higher portion of GDP on defense than the United States for the f rst time in a decade. As Europe contends with economic depression and internal terrorist violence, Russian money f ows to extremist parties in the hope of breaking apart the European Union. One former Warsaw Pact member, Hungary, is backsliding toward authoritarianism. “Europe whole and free” sounds like haunting mockery. As the relationship between Russia and the West has deteriorated, some have hastened to blame the United States and NATO for starting a new Cold War, while others entirely blame Putin himself. There is, however, another way to think, both more plausible and more troubling: the question is not “Has a new Cold War started?” but rather “Did the old Cold War ever end?” Post–World War II Germany faced its past, discarded its Nazi institutions, and committed itself to reconciliation with its neighbors. Justice was not always done. Some ex-Nazis continued to hold high judicial and bureaucratic of ces in Germany into the early 1970s. But the truth was told—and on the basis of truth, society could be renewed and peace secured. Post-Soviet elites in Russia never acknowledged the truth of what their predecessors had done to their own society— and to the subject peoples they ruled. It Was a Long Time Ago, and It Never Happened Anyway is the expressive title of the best book on the subject. Russian rulers’ refusal to face the past allowed and invited the past to return. — David Frum

Americans Are Okay With Surveillance and Torture

YES, U.S.OFFICIALS tortured prisoners; yes, they spied on the private communications of tens of millions of innocent Americans. The definitive accounts of these transgressions were released last year. You may have missed them. As in the aftermath of the Watergate scandal, official investigations probed for executive-branch excesses and found them in spades. The Senate produced more than 6,700 pages on brutal, illegal CIA interrogations. And the Privacy and Civil Liberties Oversight Board, an executive-branch agency, found that the National Security Agency’s phone dragnet “lacks a viable legal foundation” and “implicates constitutional concerns under the First and Fourth Amendments” while doing little to keep us safe. But unlike Watergate, no one resigned in disgrace, let alone went to jail. The nation shrugged and moved on. Whistle-blowers who spoke out about the government’s torture and mass-surveillance programs have been punished more harshly than torturers and domestic spies have been. The war on terror has changed us. — Conor Friedersdorf

Sex on Campus Is Impossible

OF COURSE, there’s some chance it will be awesome. But there is also a chance, alarmingly high these days, that you, Ashley, will wake up full of regret and shame and will eventually get a hysterical e-mail from your mother, who will have seen your distressed post on Facebook and figured out what happened, and will then urge you to go to a counselor’s office, where you will sob and be met with a confusing mix of suspicion and comfort, and then you will somehow, suddenly, find yourself spending nights pouring your heart out to a victims’ support group until your entire identity on campus gets reduced to “survivor.” And you, Tyler, you will also, maybe, wake up feeling a teeny bit of regret, but you won’t think about it all that much until you get a call from a counselor that prompts you, over the weeks and months, to neurotically replay every move: Weren’t we both totally into it? Did she say yes? To the first part or both parts? Were we equally drunk or was she a little drunker, and does it matter, since girl too-drunk means she couldn’t know what she was doing but boy too-drunk doesn’t give me the same pass? So you spend the rest of the term wondering: Am I going to be expelled? Is she going to carry around a mattress? Will anyone ever go out with me again?

Five years later, maybe a reporter will call. He’ll be writing a book on the campus sexual assault crisis of the 2010s, and he’ll have some questions. He’ll muse half- seriously about whether there are similarities with the 1980s’ repressed- memory of-pedophilia craze. Did people get swept up in narratives of trauma and abuse? Were people’s rights ignored? Was it really as ubiquitous as it seemed? Were there horrible cases that were missed because colleges were too distracted by the ambiguous ones? Or was this crisis indeed every bit as severe as it appeared at the time? The words will be a balm of sorts; he might even mean them. “I just want to tell your story,” he’ll say. Will it be worth it? You decide. — Hanna Rosin.