FOR THOSE IN PERIL ON THE SEA 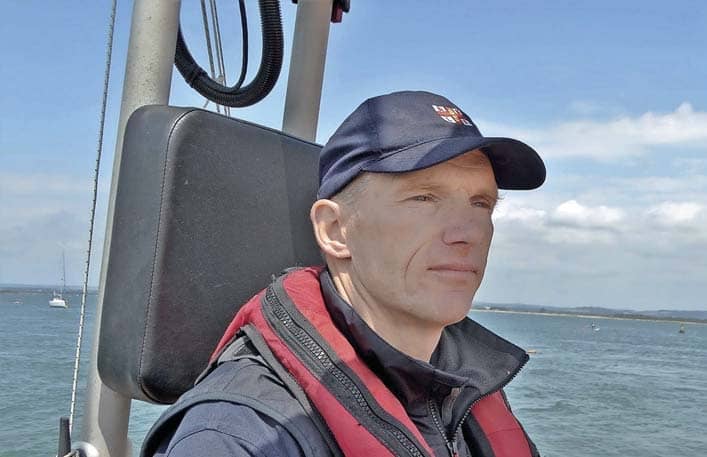 Rob Archibald’s new job involves plenty of seaside fresh air, though maybe a little too much of it at times. Since May he has been coxswain at Selsey Lifeboat Station, responsible for its two lifeboats – a high- performance all-weather vessel and an inflatable inshore boat – and often personally leading rescue missions.

The job does not come up very often. The previous coxswain, Martin Rudwick, held the post for 22 years and when he retired had clocked up 47 years of service with the RNLI. Rob himself has been with the organization since 1994. Selsey-born and bred, he remembers joining up at the age of just 19.

“At that time the honorary secretary of Selsey Lifeboat Station knew my dad and was looking for crew,” says Rob. “I had always spent a lot of time around the beach, swimming, and diving. I wouldn’t quite say I was told to join but I really wanted to do it anyway – I’d been looking at it for a while. I’d been life-saving with the Royal Life Saving Society and felt as if joining the RNLI was something I should do.”

Rob is able to draw on a wealth of experience in his new role, including mechanical expertise and almost ten years on fishing boats. He works full-time in the lifeboat station on Selsey seafront and is also a standby helmsman and mechanic for other stations throughout south-east England, able to step in to help crews from Southend round to Swanage.

Throughout his day in the boathouse, and after he has gone home too, he remains conscious that his pager could go off at any time, indicating a fresh emergency out at sea.

“The lifeboat operations manager’s pager goes off first,” explains Rob. “He calls the coastguard and agrees the lifeboat will respond. At the same time, everyone is heading for the boathouse as quickly as possible. Hopefully, the coastguard is in touch with the casualty and we are able to receive a good briefing as we walk through the door. As coxswain I pick the crew, we get our protective gear on and get going.”

Incredibly the all-weather lifeboat can be in the water just eight to ten minutes after the pagers initially go off. The inshore boat can be launched even faster – in five minutes or fewer.

The smooth operation relies on the input of quite a few people. Including himself, there are 19 lifeboat crew members available to Rob and ten shore crew, nearly all of them, volunteers. The ‘Shannon class’ all-weather lifeboat – named Denise and Eric in honor of two people who made a major donation towards it – needs six crew at a time with three shore-based helpers; the inshore ‘D class’ boat, called Flt Lt John Buckley RAF, requires three crew and two helpers onshore.