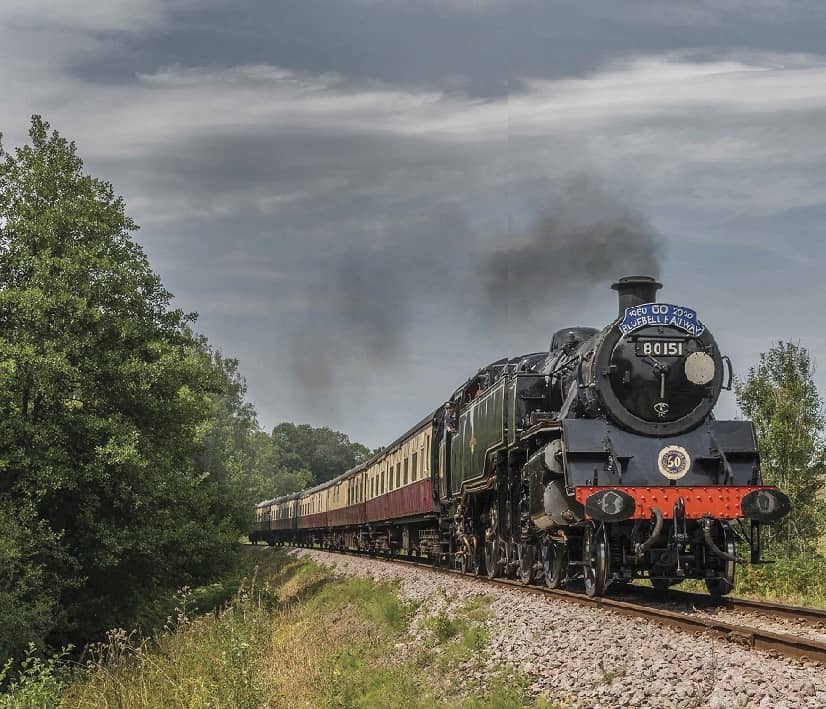 Since the story of the Bluebell Railway is a remarkable one of overcoming obstacles and succeeding against all the odds, a mere pandemic stood little chance of scuppering the 60th birthday party of this famous Sussex attraction.

And so a sizeable socially distanced crowd gathered in the glorious sunshine as the first train since lockdown pulled slowly out of Sheffield Park on 7 August to signal the resumption of service and the commencement of the diamond anniversary celebrations.

Six-year-old Alex Venton from Petworth was given the honour of blowing the whistle to get the wheels rolling as a thank you for emptying his moneybox to help the not-for-profit railway deal with the financial crisis brought about by COVID-19. Alex’s mother said: “He read about the appeal in the railway’s newsletter and asked if he could give the £6.10 in his money box.”

Alex’s glorious gesture was replicated by thousands of supporters from the UK and around the world eager to help at a time of crisis. Trevor Swainson, funding governor of the Bluebell Railway Trust, explained: “We ran a pilot fundraising appeal to test the willingness of people to support the railway. The target was £25,000 but this was soon passed. We then set an ambitious target of £300,000.

We feared the worst. Would people be prepared to support us in the face of incomes reduced through furloughing and other pressures?” He need not have worried as the total raised reached a staggering £400,000. And money is still coming in.

But it’s not quite full steam ahead just yet as Chris Hunford, chairman of Bluebell Railway PLC, observed: “For the foreseeable future we will run at weekends only. Trains will run from Sheffield Park to Kingscote only (not stopping at Horsted Keynes). East Grinstead station will remain closed due to the restricted nature of the station site and to adhere to social distancing rules. Should public demand be there, we will add further trains midweek starting on a Friday and working backwards.”

Despite being obliged to operate a restricted service for the time being at least, the Bluebell Railway can look back with pride on a remarkably distinguished history. The line’s original incarnation was as the Lewes and East Grinstead Railway, which connected the two Sussex market towns with the rest of the railway network. The first train pulled away almost precisely 138 years before last month’s reopening.