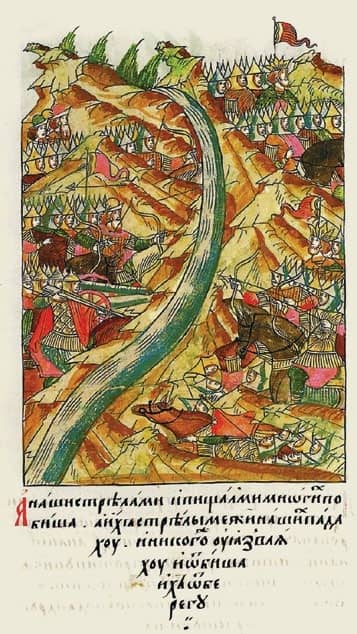 It has always puzzled me why “The Great Stand on the Ugra River,” as this confrontation in the autumn of 1480 has come to be known, is such an emblematic moment in Russian history, thought to mark “the liberation of Rus from the Tatar-Mongol yoke.”

Let’s start with the fact that, toward the end of the fifteenth century, the Horde was no longer the great and powerful state that had made Russian princes quake in their boots a hundred and fifty years earlier. The gradual crumbling of the Horde had been going on for some time. Many of the khanates, including Kazan and Crimea, were by then independent of the Great Horde, and many of the Horde’s most distinguished mirzas (Tatar princes) had settled in Rus and pledged allegiance to Muscovy. Tsar Boris Godunov himself was supposedly descended from the illustrious mirza Chet, who had come to Moscow back in 1330.

A bit over a hundred years later, the princes Qasim and Yaqub, who were unable to reach a power sharing agreement with their brother in Kazan, tied their fates to Moscow’s Vasily II (the Blind). For his faithful service to Muscovy, Qasim was given land to rule over, which is how the Qasim Khanate arose at the very heart of Orthodox Rus, on the banks of the Oka River. To this day, the town of Kasimov in Ryazan Oblast has a mosque, a minaret, and the burial vault for the area’s fifteenth- and sixteenth-century Muslim ruler.

The grand princes of Muscovy had complicated and varied relationships with the parts of the Great Horde that had broken off from the center. These relationships were not that of “us versus them” nor of oppressor and oppressed. Muscovy tried to live harmoniously with the rulers of Kazan and Crimea and at times incited them against the khans of the Great (but less so with passing time) Horde.

Meanwhile, the tribute that had placed such a heavy burden on Russian lands in the fourteenth century was now only rarely paid to what was left of a unified Horde, and with increasing reluctance. In other words, the yoke was gradually coming off on its own.

There were much more symbolically and practically important historical events signaling the Horde’s loosening grip on Rus years before Ivan III and Ahmed assembled their troops on opposite banks of the Ugra River.

For instance, in 1472 Khan Ahmed for some reason launched a major campaign against Rus but was stopped and forced back to the banks of the Oka near Tarusa. On its retreat, the Horde burned down the town of Alexin, but its attempt to break through to Moscow failed. What prompted this? Why had Ahmed suddenly felt compelled to wage war? Some historians posit that he was provoked by Ivan III’s sudden refusal to pay tribute, and the khan was undertaking a punitive expedition.

This would make sense, although some sources indicate that Ivan had not started refusing to pay until 1476, and that, at the time, Ahmed had not been able to move against Rus right away, since he was embroiled in war with the Crimean Khan (a conflict in which Moscow may have also played a hand). For all we know, the medieval chroniclers may have gotten the year wrong, or maybe there were multiple occasions where Ahmed’s demands for tribute were rejected by Muscovy.

Be that as it may, in 1480, Ahmed made another demand for tribute and, again, if legend – which we should certainly take with a grain of salt – is to be believed, Ivan not only refused to pay, but tore up the khan’s demands and stomped them underfoot. This version of events has been firmly lodged in Russia’s cultural memory with the help of a number of artistic depictions.

As it happened, this was not a particularly convenient time for Ivan to rebel. Several months earlier, his two younger brothers had started opposing him, unhappy at Ivan’s growing power and interference in their own principalities (there are accounts that Ivan III even forbade his brothers to marry so that his own children would not have rivals for power). To make matters worse, there was trouble in the northwest, where Teutonic Knights of the Livonian Order had attacked Pskovian lands, and Casimir IV, king of Poland and grand duke of Lithuania, who was warily watching Moscow’s growing strength, had concluded an alliance with Ahmed.

But Ivan felt he had no choice. Whether or not he truly did stomp on the khan’s missive, he refused to pay tribute, and Ahmed again set out against Moscow. Ivan headed southeast to meet the enemy along the path their campaigns had taken in the past, but Ahmed had decided to take advantage of his new alliance and approached from the southwest, cutting through Lithuanian territory. That is how the two sides found themselves at the Ugra River.

Today it is hard to imagine that this beautiful river, which meanders through Smolensk and Kaluga oblasts and is home to water lilies, otters, and ducks – a true paradise for kayakers – was once Russia’s frontier. Realizing this means realizing just how small the Grand Principality of Moscow was at the time. The Horde’s horsemen could gallop across it in a few days, so long as they didn’t meet resistance.

What happened along the banks of the Ugra back in 1480 was quite strange. Moscow’s forces occupied a long stretch of one side of the river and the Horde occupied the other. For whatever reason, Ivan did not immediately attack, a fact that calls into question the stomping story. He made peace overtures to Ahmed, sent him gifts, and meanwhile packed his own family (along with the state treasury) off to safety in the North.

In the story of “The Stand,” two boyars are cast as villains, “wealthy and big-bellied money-grubbers” who supposedly urged Ivan to submit to Ahmed. Whether or not this is true, Ivan himself may have been losing his nerve. In any event, at one point in the standoff he returned to Moscow, perhaps also making ready to flee north. The chronicler writes that, in the capital, the metropolitan and the boyars demanded that he return to the Ugra and stand his ground. Furthermore, Ivan’s confidence may have been bolstered by a reconciliation with his brothers, who realized that a Horde invasion would be far worse than their own brother’s tyranny.

In short, Ivan III plucked up his courage and returned to the Ugra. At that point, events became even more puzzling. 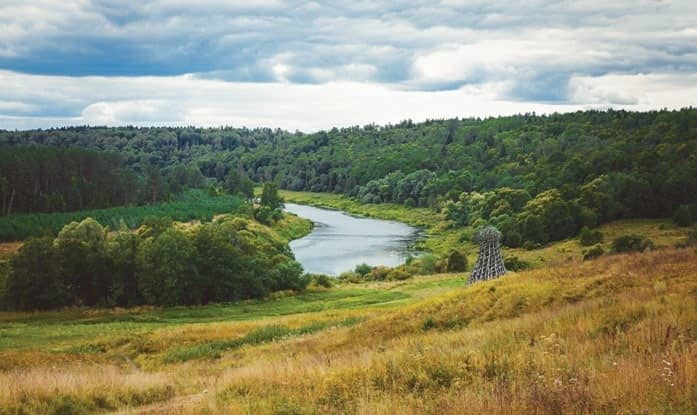 As it turned out, Ahmed had many enemies who were prepared to support his enemy. From his rear, the Crimean khan was advancing, and, back in the East, his own lands were being attacked by the Nogai Horde (yet another people who had broken away from the Great Horde). Furthermore, the troops Casimir had promised to send were nowhere to be seen. And winter would soon set in.

October passed in tense anticipation and with a few small skirmishes. Finally, in early November, the Horde simply picked up and left, without waiting for the river to freeze and give them an easy crossing.