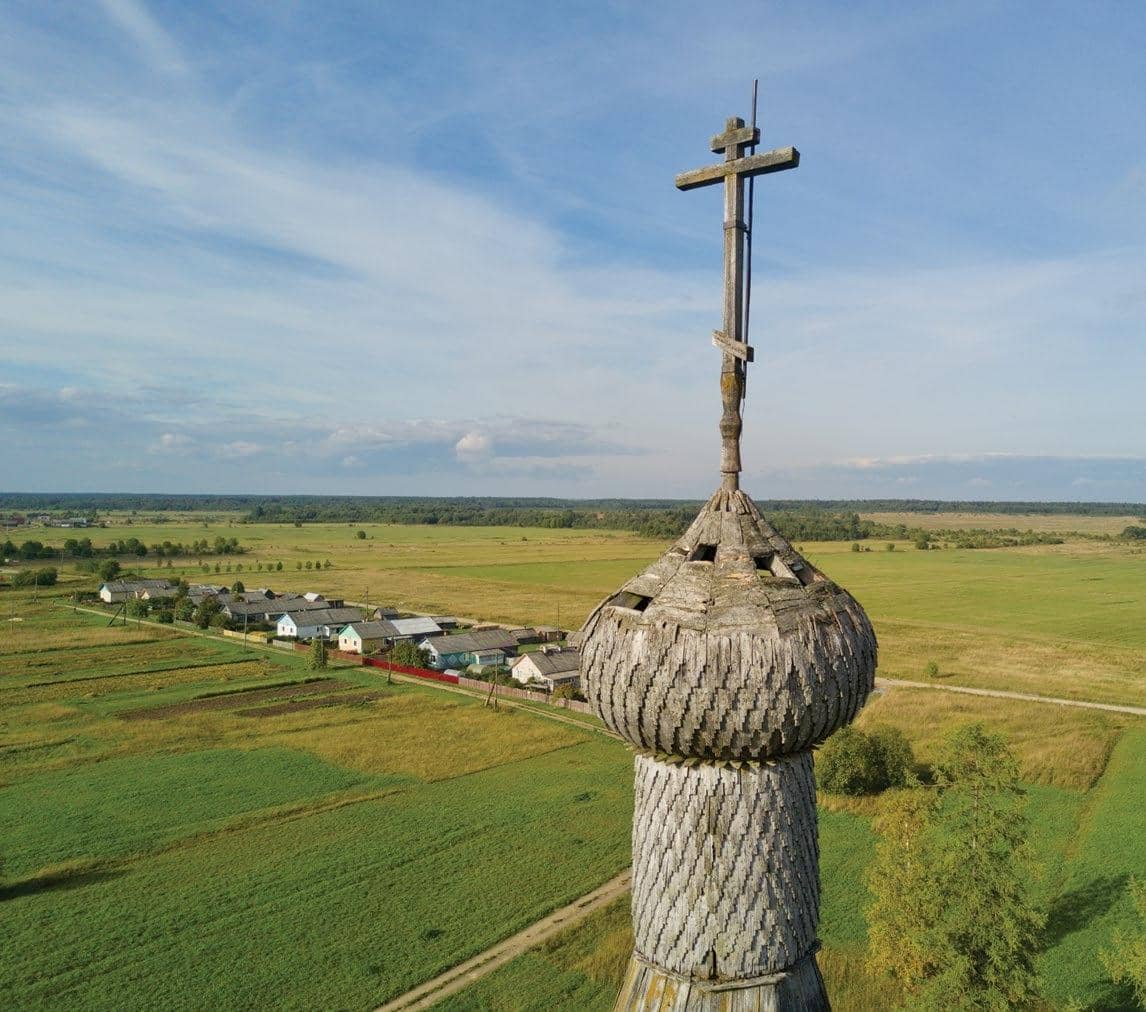 Just before sunset, a large, modern bus stopped in the quiet village of Saminsky Pogost. About three dozen women (along with a nun and several men) stepped out onto the dusty, sandy road.

This was not a group of pilgrims. They looked a bit more like tourists and were traveling from Vologda to the shores of the White Sea to visit the Solovetsky Islands. This small village on the border of Vologda Oblast and the Republic of Karelia simply happened to be the approximate halfway point of their thousand-kilometer journey, and they had decided to make a short stop to see the ancient wooden Church of the Prophet Elijah.

Built at the end of the seventeenth century, and currently, in a semi catastrophic state of repair, the church is similar to the famous Cathedral of the Assumption of the Virgin in Kondopoga, which was destroyed by arson in August 2018.

The group was in luck. The church’s caretaker, Nikolai – bearing a grey beard and a set of keys – was nearby.

The group stepped inside, where just a single window, from which Nikolai removed a wooden shutter, illuminated the darkened interior.

Suddenly, from the quiet depths of the assembled group, a lone voice rang out: “Why are we wasting time on this ruin?”

The voice belonged to a pleasant-looking, well-dressed woman standing in the front row. She radiated an air of tense dissatisfaction.

The caretaker began to recount the church’s history, even though no one had asked him to. He also spoke of the village’s collapsed Tikhvin Church: volunteers had not been successful saving it, only in rescuing its cupolas from a debris pile.

“The bell tower stood here,” Nikolai continued. “But an old woman wrote a declaration to the village council, saying she feared that the tower would collapse and fall on her izba. That was all that the local Soviet officials needed. Based on her statement, they set to work and demolished the three-hundred-year-old structure. The old woman later became physically twisted into something unrecognizable. She was a hunchback for the rest of her days,” the storyteller added with no evident malice.

After the short excursion, the group and I parted ways. They went back to their bus; I went down to the river.

Yet I had not gotten very far when I heard a scraping, as if metal sheets were hacking away at one another. The sparkling new bus screeched to a halt after driving just thirty meters. The driver got out for an inspection and stunned the passengers by informing them that the clutch had almost completely given out and they would have to wait seven or perhaps up to ten hours for a replacement to arrive from Vologda.

The tourists exited the bus. After some thought, a few descended to the wooden bridge over the river, while several others sat or even lay down on the old wooden steps of the Church of Elijah. The sun had already set, and a cold, northern night lay ahead. It was as if some mystical hand had forced them to stay overnight in this small place. 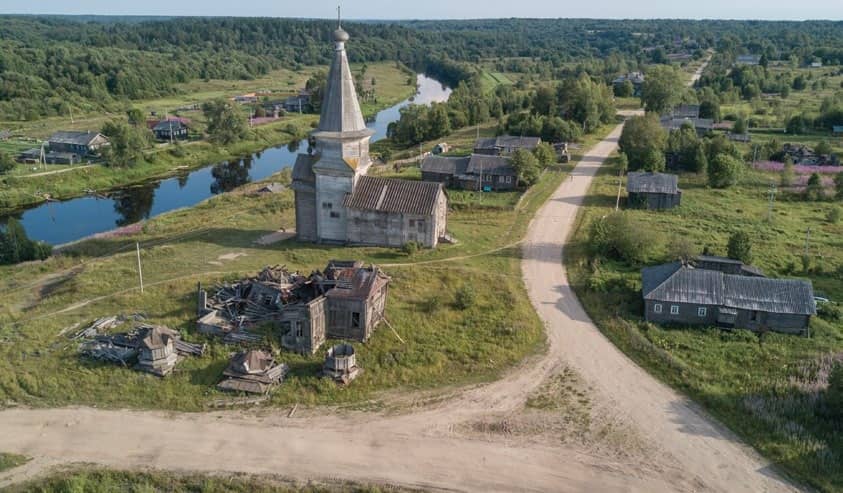 THE WOODEN ARCHITECTURE OF THE RUSSIAN NORTH IS A STARK example of the collision of time, the elements, and human will. The financial turmoil at the turn of the twenty-first century and a decline in birth rates led to an exodus from the country to the city, as a result of which thousands of villages emptied out. As they say in Russia, they simply died off.

Countless izbas, each of which is entirely unique, were abandoned, to be buffeted by wind and snowstorms. But the real catastrophe of the post-Soviet era was the decay and loss of hundreds of examples of wooden church architecture. Neither religious nor secular authorities needed the chapels and churches of all sizes that sat amid depopulated or underpopulated villages. Tourists, for the most part, were rare or random. And those that have found themselves in surviving churches rarely appreciate what they are seeing, hurrying as they are to their next destination.

I set out to travel around the Russian North, keenly aware of the need to make haste if I wanted to see remote villages and towns that, in just a few years, will look nothing like what they do today. Not only is a generation with unique knowledge departing – those born and raised in the most difficult decades of the twentieth century – but their homes are being ravaged by time. Often entire landscapes and natural landmarks are being wiped from the map.

And yet I also found people whose ache for their native culture and their desire to preserve it turns them into saviors of these darkened, cracked pearls of wooden artistry. Hundreds of people go to the North every summer to take part in restoration work and emergency operations. Some, after arriving for the first time, choose to leave city life behind and move into ancient wooden izbas, making woodworking their life’s work.

They jokingly call themselves “black restorers.”* Black in the sense that they are self-supporting, independent, and they do not act on anyone’s instructions. They simply understand that their work is needed right now, and they don’t have time to wait for permits. On prospecting trips I took with them, I learned that, if we delay for not years but just months, it may be impossible to save some of these monuments. A big snowfall, a storm, or a hard rain could easily destroy something that has stood for centuries. 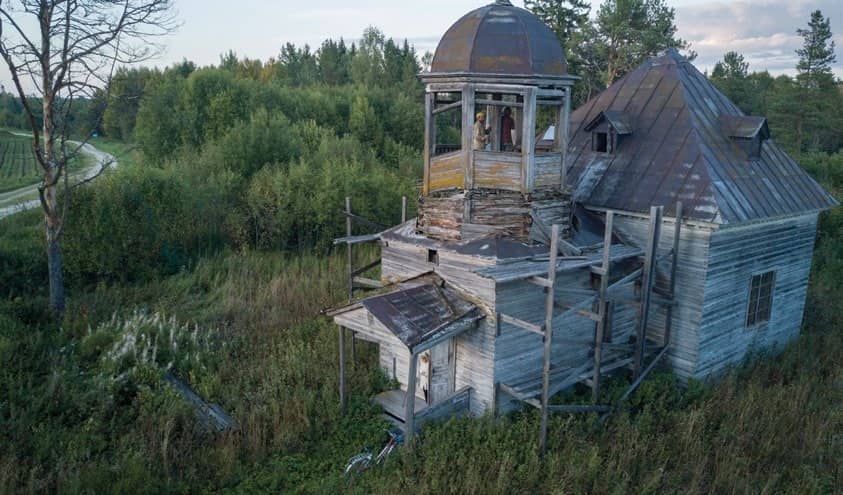 THE FOG IN ARKHANGELSK OBLAST CAN BE SO THICK THAT PEOPLE use the word “milk” to describe it. In the midst of such milk, Alexander Matyukhin scythes the grass about his home, then around the massive, wooden Sretensky Church. Very close by is an even older church, named for the Archangel Michael (1715). The church is the source of the village’s name: Arkhangelo.

Matyukhin came to the North many years ago with a group of restorers, then moved here with his family.

“Kargopolye, where we are now, has always traded in grain. But nowadays they tell everyone that it’s not profitable. That, basically, it’s unprofitable to work at all.” Matyukhin explains, the scythe never leaving his hand. “Look what grandiose churches they built. Meanwhile, the way they lived… their izbas were heated until they were black, smoke filling them. All of the best things they gave to the church, but now it is all the other way round.”

Matyukhin rolls a cart across the dewy grass toward a small sheep paddock with sheep that stands next to his workshop.