In Search of Terra Incognita

The risk one runs in exploring these unknown and Icy Seas is so very great, that I can be bold to say, that no man will ever venture farther than I have done and that the lands which may lie to the South will never be explored. ~ British Captain James Cook

This came nearly fifty years after Captain Cook, in 1773, made maritime history by being the first to cross the Antarctic Circle, aboard the HMS Resolution.

Prior to Bellingshausen’s sighting, existence of a southern continent (the last on Earth to be discovered) was still a mythic speculation. The ancient Greeks had been the first to posit that there must be a landmass at the bottom of the Earth, in order to balance the northern continents. The North was called Arktos, the Greek word for “bear,” named after the constellation only visible in the northern sky. Thus, Greek philosophers simply surmised that a comparable Antarktikos was essential for earth’s equilibrium.

This Terra Incognita long captured explorers’ imaginations, and many set out for distant southern waters in hope of finding the elusive continent. In 1520, when sailing through the straight at the bottom of South America that now bears his name, the Portuguese explorer Ferdinand Magellan thought that the land sighted to his south could be it.* But it would take another three centuries to discover Antarctica, lying less than 800 miles away.

* The Tierra del Fuego archipelago lies south of the Strait of Magellan. In 1578, the English privateer Sir Francis Drake was blown by a storm out of the strait farther south into unknown waters (now known as the Drake Passage) that implied an ocean existed below the South American continent.

In the spring of this year, I traveled over 4,000 miles across the Southern Ocean to retrace some of the remarkable discoveries made by Bellingshausen – his 1819-1821 expedition also circumnavigated the Earth closer to the regions of perpetual ice than even Captain Cook. During the heroic age of Antarctic exploration, his surveys and observations greatly contributed to the knowledge of this vast and yet mostly unchartered territory.

* Bellingshausen’s family migrated from Germany to Saaremaa (then known as Ösel) in the 16th century. In 1721, the area was ceded to the Russian Empire during the reign of Peter the Great. Thereafter, subjects entering government service who were not ethnic Russians were expected to adopt Orthodox forenames and patronymics. Thus, after receiving his commission as a midshipman, Fabian Bellingshausen (named after his father) took the name Faddei Faddeyevich (for St. Thaddeus of Edessa)

The expedition shall use all possible efforts to achieve as close to the Pole as possible, search for unknown lands, and not leave this enterprise otherwise than with insurmountable obstacles.

IN OLD AGE, AFTER MORE THAN FIFTY YEARS OF SERVICE in the Imperial Russian Navy, Bellingshausen liked to proudly state that he had spent 13 years, nine months and 14 days at sea. He was born on Saaremaa,* Estonia’s largest island, in 1778, and went on to graduate from the Cadet Corps at St. Petersburg’s Kronstadt Naval Academy. A great admirer of Cook’s accomplishments, he signed on as navigational officer in 1803 with Russia’s first expedition to circumnavigate the globe. After distinguishing himself on this three-year voyage, the newly promoted captain went on to serve with ships in the Baltic and Black Sea Fleets. In 1818, when Tsar Alexander I authorized a mission to venture farther south than Cook and locate possible lands around the Pole, Bellingshausen was selected to lead it. By then he was a highly experienced explorer and cartographer.

I first took interest in Bellingshausen when I noticed the bronze statue that stands in his honor at Kronstadt on Kotlin Island, west of St. Petersburg. From 1839 until his death in 1852, the renowned admiral acted as the military governor here. As I gazed out over the Gulf of Finland, I couldn’t help but imagine what it was like to have set off from this great naval fortress in a sturdy, wooden three-masted sloop for unexplored southern regions, never knowing when or if you would return. The first news of the voyage published in Russia read: “We shall be preparing for a very difficult and dangerous voyage among the giant masses of ice that surround the South Pole; preparing to shut ourselves up in wooden planks for four months and float about above the great abyss of the ocean.” 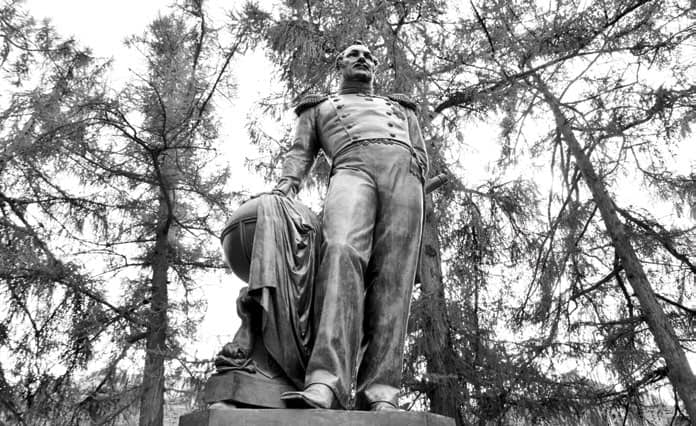 BELLINGSHAUSEN’S EXPEDITION CONSISTED OF TWO ships, the commander’s 129-foot (plus 10 inches) flagship Vostok (East) – whose bottom hull was lined with copper sheets for added protection against ice – and the 120-foot support vessel, Mirny (Peaceful), headed by Mikhail Lazarev. The officers and crew were recruited as volunteers from the naval barracks according to strict criteria: those selected had to be “fit, no older than 35 years, possess a skill other than seamanship, and have the ability to shoot rifles well.” The full crew consisted of 190 men, including the astronomer Ivan Simonov, the artist Pavel Mikhailov, a physician for each ship, and an Orthodox monk.

The two vessels departed Kronstadt on July 3, 1819 (Old Style), and made a brief stop in England, where Bellingshausen met with Sir Joseph Banks, the famed naturalist who had earlier sailed around the world with Cook. Banks agreed to provide the mission with additional books, nautical almanacs, and navigational charts. Because of the ambitious journey, Bellingshausen also took on two years of supplies, including 65.8 tons of biscuits, 20.5 tons of dried peas, seven tons of oats and buckwheat for kasha, 28 tons of salted beef, over 1000 gallons of wine and vodka, and 500 pounds of tobacco. Sauerkraut, lemon extract, and molasses would help prevent scurvy, and icebergs were to provide fresh water. Four months later, after having crossed the equator, the ships landed in South America, the last opportunity to take on extra provisions.

As Bellingshausen, I traveled from South America southeast by ship towards South Georgia Island, crossing the Antarctic Convergence – a natural boundary where warmer seas meet the cold, northward-flowing waters of the Southern Ocean. I’ll never forget the wondrous views of all the penguins, glaciers and mountains on South Georgia, and making similar observations as Bellingshausen:

On 15 December we sighted Wallis Island, which lies on the western side of George Island, the northern and eastern sides of which had been surveyed by Captain Cook. In order to complete the survey, therefore, I passed around the southern side… which consists of sharp-peaked mountains covered in snow, and the deep valleys which separate them are filled with ice right down to the sea.