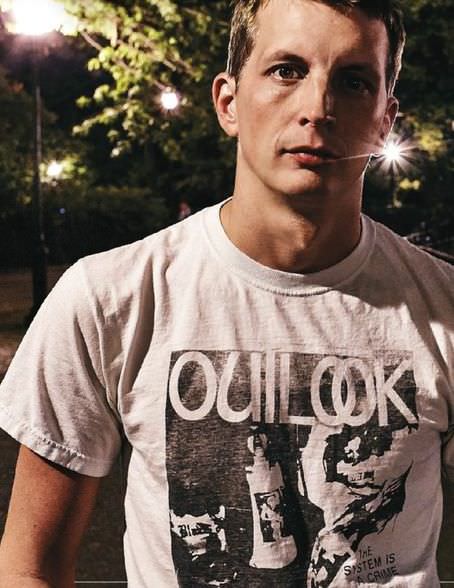 City On Fire, a debut novel, generated a headline-making $2 million bidding war. Which means quite a lot is riding on its 36-year-old author. Believe it or not, hes chasing even bigger things.

Never wanted to be the guy wearing a T-shirt that read ask me about my novel,” says Garth Risk Hallberg. One August evening in 2012, he was that guy. He’d been invited to the wedding of writer-banker Gary Sernovitz and academic Molly Pulda at the Bowery Hotel. Among his tablemates were Diana Miller, his future editor; Tom Bissell, whom he’d just reviewed in the Times; and Chris Parris-Lamb, a young literary agent whose recent success with Chad Harbach’s The Art of Fielding was well known to all—including the writer seated across from him. A souvenir “dictionary” defined each guest. Hallberg’s entry read: “Critic-novelist certain he will win the Postmodernist Fiction Trivia Contest to be held in the men’s bathroom at 11:59 tonight.”

At the time, the “novelist” part was notional. Hallberg’s wife was the only one at the wedding who had seen the thousand-page stack of text and graphics that would become City on Fire, a sprawling, populous mystery culminating in New York’s 1977 blackout, for which Knopf would later pay $2 million—probably the highest North American advance ever for a debut novel. Hallberg had been thinking about it for nine years and quietly writing it for five. But at the wedding, he was just a gangly 33-year-old blogger-critic with two kids and five figures of debt, a junior-varsity member of Table 14.

Hallberg and Parris-Lamb were paired up, Pulda says, because they were “two tall skinny guys” from North Carolina. “He is from an even shittier town than I am,” says Parris-Lamb, “so we were doing the competitive thing: ‘I made it further than you’ or ‘I started lower than you.’ Which, of course, as white men we should never do, but you know what I mean.” Parris-Lamb was sleek and tailored, as always. Hallberg wore second hand off-white velvet pants. A few drinks later, Hallberg got up the nerve to pop the question, and before long they were “totally breaking it down on the dance floor.”

All meet-cute stories have at least two versions. Hallberg remembers asking, “So, what would you do with a thousand page manuscript?” To which Parris-Lamb replied, “Is it yours?”

Parris-Lamb recalls a general question about agents. “I said, ‘Why don’t you just tell me about the book?’ He said, ‘Well, it may be unpublishably long.’ And I laughed and said something like, ‘Go big or go home.’ ” Parris-Lamb sent it out the following autumn, and it went big. Of the 14 editors who read the manuscript, 12 wanted it. Seven houses (representing nine editors) bid more than $1 million at auction before Knopf won for twice that—more than three times what Harbach was paid. Scott Rudin optioned the film rights for six figures the day after getting the manuscript; 17 other countries have already bought it. Knopf has given away 6,500 advance copies, more than most first novels ever sell, and has scheduled an 18-city tour and an ad campaign as tentacular, to use a Hallberg word, as the book itself. But while Knopf is fronting the cash, almost everyone in publishing is invested in its success (even those who work for Knopf’s rivals and those who grumble about too many eggs in too few baskets). There are only so many $2 million bets any house can afford to lose.

But why this novel, at this time? One of the ironies of Hallberg’s windfall is that he mastered a winner-takes-all system in a winner-takes-all city by selling a vivid and intricate dream of its opposite: dangerous, democratic ’70s New York. Secondhand nostalgia for that dark decade surely appealed to Parris-Lamb and the mostly young editors who bid up its price, the first generation to know New York only as a padded playground. It might also suit the tastes of readers primed by art shows, TV series, and essays besotted with the era. Packed with violence, arson, drugs, and corruption but also love, sex, punk rock, “found” art, and literal fireworks, City on Fire can look like an object machine-tooled for maximum market impact. But that would probably be unfair to the writer and even the publisher. Better to say that Hallberg made a very long and sincere novelistic case for grandeur, connectedness, and fiction itself in a fragmented, reality-hungry world, and the industry bought it.

Hallberg says he wrote City on Fire under the “necessary fiction” that no one would ever publish it—“a very useful position for me in doing whatever the fuck I wanted.” A few SAT words aside, the most obvious obstacle is its length; to look at a few recent very long best sellers and award winners, though, that might actually be an asset. It certainly telegraphs audacity. City on Fire was sold on comparisons to Donna Tartt’s The Goldfinch and Tom Wolfe’s The Bonfire of the Vanities, but its own vanities—its vocabulary, wingspan, and philosophical top notes—speak to Hallberg’s obsessions with Don DeLillo and David Foster Wallace and the great Victorian “triple- deckers.” Asked to explain its commercial appeal, Knopf’s reticent editor-in-chief, Sonny Mehta, tapped an unlit cigarette and shifted uncomfortably behind his desk. “Well, look,” he said, “it’s the ambition of it.”

Ambition is a loaded word. You can be ambitious for artistic achievement or for fame, money, power, immortality. Hallberg is refreshingly direct about what he’s after. “My goal,” he says, “was to get the book somewhere that is going to allow me to be DeLillo 40 years from now.” Whether that goal is advanced by a $2 million book deal is an open question.

Who didn’t exist at the convergence of a thousand thousand stories?” asks City on Fire’s gnarled detective, contemplating the “ley-lines” that link its sundry players—a corporate dynasty, an anarchist collective, a misfit teen, a boozy New Journalist—to a Central Park shooting on New Year’s Eve 1976. The novel is a 911-page mosaic in which punk lyrics clash with Latin, grime with glitz,a 25-page pasted-together zine with a medical report, a nihilistic terror plot with a naked plea for empathy.

It’s also something of a page-turner, by virtue of its plot twists and its sheer accumulation of stuff (see review on page 129). The novel amasses evidence concerning not just the mystery of who shot 17-year-old Samantha Cicciaro but many other crimes both committed and foiled. Among them are the burning of the Bronx, a bombing in midtown, financial skulduggery, infidelity, and looting—more broadly, the piecemeal destruction of the city’s social fabric. Hallberg renders that chaos not as dystopia but its opposite, Bad Old New York as a city of dreamers—a pair of truant Long Island teens, a gay black Southerner, a wealthy heir hooked on punk and heroin—looking not for careers or ways to afford rent but for answers, connections, and meaning. City on Fire’s biggest mystery is whether blackout-era New York is worth saving, and Hallberg’s answer seems to be: now more than ever.

Exactly 38 years after the blackout, this past July 13, Hallberg was wilting slightly in a sunbaked, manicured corner of Tompkins Square Park, trying to define his style. “There’s a great description of the album Born to Run,” he said, then quoted Greil Marcus verbatim: “ ‘A ’57 Chevy running on melted down Crystals records.’ It’s one of my favorite albums, but it feels instantly recognizable, because it speaks the language of Phil Spector and Duane Eddy and all the great one-hit wonders. And just supercolliding them … Springsteen was so obsessive about every note. You would never call that album experimental or avant-garde, but somehow in the context of Captain & Tennille or—uhm …” He paused as the disco strings of Michael Jackson’s “Don’t Stop ’Til You Get Enough” suddenly erupted nearby. “Yes, that!”

The music was blaring from a speaker mounted on a passing bicycle. “I want that for my bike, that’s awesome,” he said, a toothy grin breaking his middle- distance stare. But it didn’t throw his conversation off course; not much can. “Hold that thought,” he’ll say to an interjected question, just barely flashing impatience before rolling into his next paragraph.

Hallberg is more adept than most at banishing distraction. He wakes up to work long before his family does and checks his email only at rare intervals. He still owns a tiny flip phone, and he guards his time, attention, and privacy by burrowing into what one friend calls a “preconnected universe.”