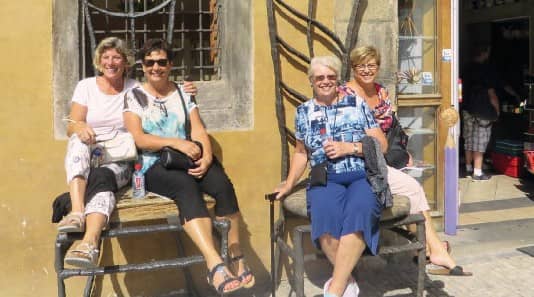 My mother, Mary (Maria) Harvanka, leftCzechoslovakia in August 1929 at the age of six with her younger sister, Anna and their mother, also named Anna, sailing on the Red Line ship, Arabic. Her father had already immigrated to Montreal and was waiting for them there. In 1948, Mom married Sam Stocker and they raised my three sisters and me in Longueuil on the South Shore of Montreal.

One of my earliest memories is walking up the steep flight of stairs to the upper part of the duplex where my grandmother lived on Ste. Elizabeth Street. There, she would take out her huge wooden board and make home-made noodles, called domáce rezance, for chicken noodle soup. Sometimes she might have poppy-seed treats for us or cookies with walnuts in them and powdered sugar on top. We called her Momo.

My three sisters—Susan, Cathy and Betty—and I had often thought about visiting my mother’s birthplace of Polomka, Slovakia. In September 2018, when we ranged in age from 60 to 69, we were finally able to fulfill our dream of a trip to Eastern Europe.