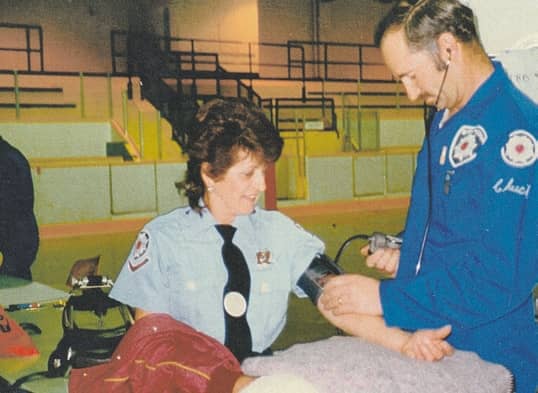 It was in late 1979 when the County of Strathcona decided to construct and open its fifth fire department, in the hamlet of Josephburg, Alta. A meeting was held for a call for volunteers to join the new department, and by the time the meeting was over, I was one of the firefighters chosen to be trained, together with seven other women and 13 men.

We met at the fire hall every Monday for training. We trained in first aid treatments and CPR, skills that were tested and updated annually to keep us at the ready should we need to apply them on duty. We also learned about the mechanical workings of the fire trucks, proper handling and caring of hoses, ladder handling and maintenance, and the use of air packs in entering burning or smoke-filled buildings. After a few months, we were answering fire calls in town or at one of the numerous farms situated in the north end of the County.

I loved being part of the firefighters. There was a lot to learn and I became more confident in myself. I learned to climb up roofs of buildings and to rappel down to the ground again. I also learned to wear those air packs and go into a smoked-filled building in a mock rescue of victims lost in a would-be fire. We were a small, organized group of 20 who worked well together.

LIFE ON THE LINE