Pulling together for fun

Exmouth seafront. Looking across the sweep of sandy beach to the sea, the curve of Dawlish Warren spit to the southwest and the green rolling hills beyond it, it’s easy to see what might attract someone to this corner of Devon.

And for sporty types, the town is fast becoming a mecca. The area has seen significant investment in its facilities and a new watersports centre is being built - part of a larger plan to make the most of the town’s natural surroundings. But in the middle of all this, there are still some community stalwarts doing what they do best, including the Exmouth Rowing Club.

Formed 27 years ago, the club was the brainchild of founding members Andy Herbert, Steve and Tam Charles-David and Wallace Sunley. The four were on the lookout for an outdoor pursuit to pre-empt their social visits to The Beach Hotel bar and decided to give ocean rowing a try.

The club’s recreational rowing organiser, Les Northcliffe tells me: “After each chipping in £250, Andy, Steve, Tam and Wallace invested in their first vessel: a Cornish Fly Boat which they stored in a garage near Shelly Beach and the Exmouth Rowing Club was born.”

Since those early days, the club has grown considerably. There are now 80 members, a two-storey clubhouse in a prime location on the esplanade and, of course, quite a few more boats.

Club Secretary, Bjoern Fock explains: “We started from humble beginnings: a shed located in what is now the car park behind the club house. Our move into the old lifeboat station was a catalyst for a lot of the redevelopment here.” 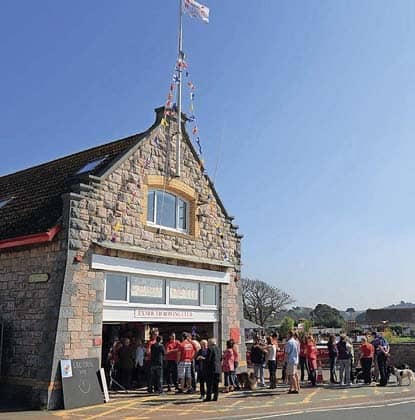