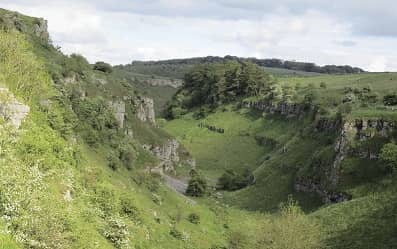 1 Walk down the hill from the car park, passing St Anne’s Church built in the late 1870s. The graveyard contains the final resting place of Sir Maurice Oldfield GCMG CBE. Born into a local farming family, he grew up in Over Haddon with a humble childhood before rising to fame as Head of MI6 from 1973 to 1978.

2 Arriving at the river, turn right to walk past the old corn mill. Records show a mill on this site from at least 1529. Follow the concessionary riverside path beside the Lathkill, described by Charles Cotton as ‘By many degrees the purest and most transparent stream that I ever yet saw’. This is a river of much character as during dry spells for almost a mile it can look as though the water has disappeared. However, its flow actually follows a subterranean course, permeating down through limestone, old mine workings and a former sough before bubbling up again from boil holes close to the old fishing lodge.

You will pass two small entrances to what look like caves. These mine adits were driven into the hillside many centuries ago in the pursuit of lead ore known as galena. On entering the woods beyond you may wish to detour up a short path to the right to visit the remains of Mandale Mine, a rare survivor of mining activity from at least the 16th century, with the remains of an engine house, gated mine entrance, wheel pit and aqueduct leat.

3 At a bend in the river notice the ‘Japanese Pagoda Garden’ bridge, which provides access to Bateman’s House, and its accessible ‘secret shaft’. Continue through the dale past numerous dips and hollows, evidence of even more disused mine workings. Listen for buzzards and jays that haunt the woods and skies above and watch the river for dippers patrolling up and down the surface of the water, often sitting on rocks to serenade you as you pass by.

4 Emerging from Palmerston Wood you will pass through two gates beyond a weir and then walk past the remains of Carter’s Mill, where a pair of old grinding stones can still be found half-buried in the ground. Follow the path beside the former mill pond to where water cascades over a moss-coated waterfall.