AVEBURY: Tales of the Prehistoric Cathedral of Wiltshire

In the strange time of self-isolation in which I’m writing this, we’re having to content ourselves with the familiarity of our homes. I’ve been musing about my favourite places, and I’d like to share with you a place I love, one that’s full of energy, that I go to when I need to recharge my batteries

Avebury is a strange place. Unlike Stonehenge on its bare plain, Avebury seems deceptively cosy; a village, including a pub, the Red Lion, nestles in among the earth embankment and ditch – the henge – alongside the stone circles. But this is the largest megalithic complex in England, and the wider sacred landscape stretches out several miles beyond. The village – particularly proximity of the Christian church – may also be the reason why there are few folktales about Avebury. Any tale that explained how the stones got there is now lost. In contrast, the Rollright Stones near Chipping Norton are blessed by a story of how they were formed: when a witch challenged a king that he’d be king of England if he could see Long Compton in seven paces, he took the chance, failed, and he and his knights were transformed into stone. Nor is Avebury like the Weddings of Stanton Drew in Somerset, the forms of dancers frozen in place at a wedding – they were dancing on the Sabbath. Even Stonehenge was said to have been brought from Ireland by the magic and cunning of Merlin the wizard. 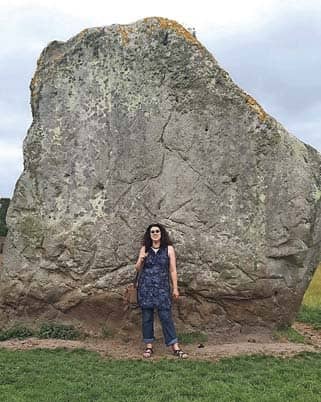