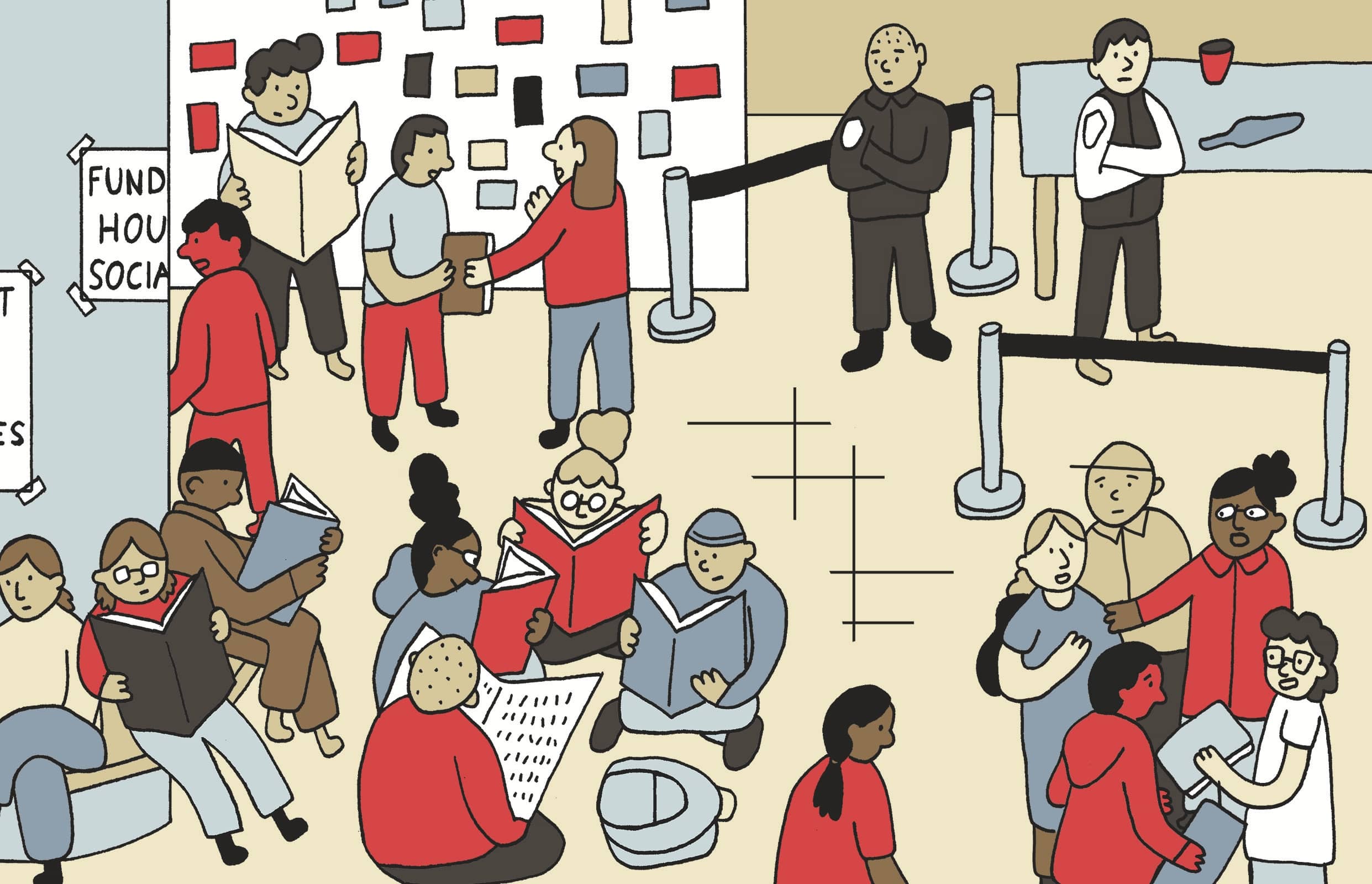 The struggle over whom Winnipeg’s downtown library belongs to serves as an unexpectedly sophisticated example of what’s possible when leftists organize outside of the electoral sphere and commit to winning a single protracted struggle.

The library foyer is packed with people. Many sit on the ground reading a book – popular selections include Robyn Maynard’s Policing Black Lives, Owen Toews’ Stolen City, and Tanya Tagaq’s Split Tooth – while others chat quietly among themselves. Neon sticky notes are circulated for attendees to fill out and post on the wall next to a large yellow sign asking, “what is your vision for a better library?” There’s an electric, almost festive, mood in the air.

But the occasion itself is far from celebratory. Signs taped to a concrete pillar in the middle of the foyer make that abundantly clear: “Fund & House Social Services,” “Consult Our Communities,” “Stop Security Screenings.” A giant banner reading “Millennium for All” hangs from the second-storey balcony facing the foyer – and the airport-like security checkpoint of metal detectors and mandatory bag searches that the 200 people have gathered to oppose with an hour-long “read-in.”

A month before, in late February, Winnipeg’s downtown Millennium Library abruptly installed an invasive screening process using contracted private security to confiscate all alcohol, drugs, needles, sharp objects, and any other item that “may provide a safety or security risk” to staff and other patrons. Everyone entering the library has to pass through screening, and anyone who refuses the search and scan is denied access to the library. No notice was given to community organizations before the checkpoint was installed. In fact, the only group consulted about the plan was the Winnipeg Police Service, whose headquarters are literally across the street from the library and who receive almost one-third of the city’s annual operating budget.

“I thought it was horrifying,” says Bronwyn Dobchuk-Land, professor of criminal justice at the University of Winnipeg and member of the prison abolition organization Bar None, in an interview with Briarpatch. “Being familiar with the Millennium Library and the kind of space it is and who uses it, and being familiar with the way that politics work in Winnipeg with public discourse and security – you just know immediately who it’s intending to keep out. It’s so disappointing, because the Millennium Library is actually such a special library.”

The screening process has been criticized as Transportation Security Administration (TSA) inspired “security theatre,” and an explicit attempt to further displace oppressed people from a gentrifying downtown. It’s the first of its kind in a Canadian library, something library manager Ed Cuddy effectively bragged about during a community consultation organized by Millennium for All. In contrast, a public library in Richmond, Virginia, contacted by CBC said that they wouldn’t even consider introducing bag checks and metal detectors, despite being in a state with open-carry gun laws.

Library users in Winnipeg are fighting back. The newly formed group “Millennium for All” has presented a strong and nimble public response, organizing regular events such as the read-in and read-out (where people read segments of their favourite books outside of the city hall), coordinated call-in campaigns to councillors, and presentations to council committees. In mid-March, the group hosted a packed community consultation to make up for the outreach that library management never undertook. Other organizations, including the Manitoba Harm Reduction Network, Sunshine House, and Spence Neighbourhood Association, have voiced serious concerns about the screening, with some pulling their programming from the library until the measures are removed.

In a city whose left is largely spinning its wheels in getting the milquetoast NDP back into power, the struggle over whom Winnipeg’s downtown library belongs to – an issue intimately tied to racist crises of housing, harm reduction, and policing – serves as an unexpectedly sophisticated example of what’s possible when leftists organize outside of the electoral sphere and commit to winning a single protracted struggle.

ON PINS AND NEEDLES

Library management required a crisis to justify the introduction of security measures. It found one in the city’s so-called “meth epidemic,” a spectre that has been frequently leveraged in recent years by business interests to explain an alleged rise in erratic behaviour, property crime, and violence – and in turn, they call for an increased presence in policing and surveillance in the city’s rapidly gentrifying downtown.