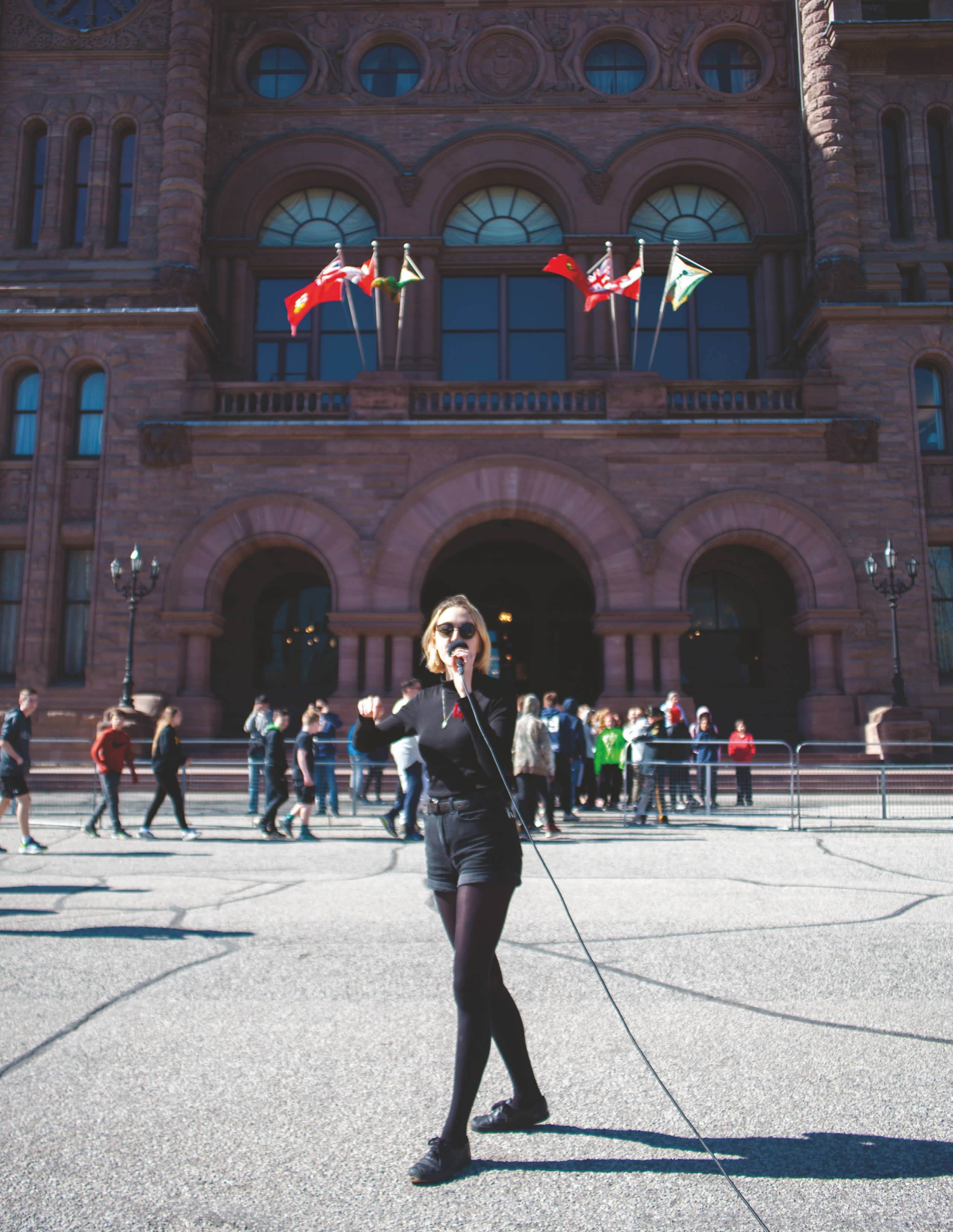 “We’ve heard that people like to make memes about Doug Ford. Could you describe one of them?” asks a journalist from a mainstream media outlet.

“I’m sorry, I can’t,” replies Amina Vance, an 18-year-old organizer of the Students Say No (SSN) group fighting Ford’s cuts to public education. “Let me tell you another story.”

Memes are low-hanging fruit for reporters hoping to play up the youth and social-media savvy of high-school organizers – but a bustling social movement they do not make. Amina is right: there is a better story here.

But students of all ages have been relentless, too. On April 4, nearly 200,000 high-school and middle-school students across Ontario walked out of their classes in protest of Ford’s devastating cuts to education. More than 700 schools participated in the largest student walkout in Canadian history. Reporters and older activists alike are asking: how did high schoolers pull it off?

Students Say No is a coalition of students from across the province that formed to demand a reversal of Ford’s cuts. As SSN’s walkouts unfolded, I watched Ford and the mainstream media repeat the same shallow and tired narratives about youth movements – that they’re “political ploys” orchestrated by teachers or unions, and that their success can be chalked up to social media finesse. But when I dug a little deeper, I was excited by the new – and old – organizing tactics that the SSN activists were using. I wondered: what could older activists learn from this new generation of radicals? And given the potential for an Ontario teachers’ strike after the expiration of their collective agreements on August 31, what could solidarity between teachers and students look like?

THE LADDER TO MASS HIGHSCHOOL MOBILIZATION

Before becoming a core organizer with SSN, Savi Gellatly-Ladd – who is 16 years old – was organizing with Not Just Rumours, a student group protesting sexual misconduct in schools. Amina had just graduated high school in June and was organizing with groups like the Ontario Coalition Against Poverty. Both of them come from families of organizers, and Amina and Savi finally met one another at a Fight for $15 and Fairness action in November of 2018.

When I sat down with them, both articulated a political analysis of capitalism that was far more incisive than what I had at their age. Education is “one of the last […] strongholds against a real age of austerity,” Amina tells me. Savi adds that education is “useful for fighting against oppression,” particularly given that the high-school content on the chopping block is that which directly challenges systems of oppression, like curriculum revisions called for by the Truth and Reconciliation Commission.

Ford’s cuts to education are “a specific attack on people’s ability to think,” continues Amina. “A deeply broken system can only self-sustain when people are uneducated about how messed up it is.” That’s why Amina and Savi have been trying to help their peers, and the public, understand how Ford’s cuts fit into a broader program of austerity and hard-right social conservativism.

Ford’s plan – announced in July 2018 – to impose an outdated sex-ed curriculum that lacked discussion of consent, gender identity, and queer relationships was a wake-up call for many. Young people organizing through the March for Our Education – another high-school group protesting Ford’s education cuts – coordinated a campaign called “We the students do not consent.” In September of 2018, 40,000 students from nearly 100 schools across the province walked out of their classes.

For students, taking direct action against the cuts was “a brand new idea for them; the fact that you could have something happen to you and then respond is crazy,” says Amina.

A few months later, students won major concessions around the sex-ed curriculum, wherein consent, sexually diverse relationships, and gender identity would remain in the curriculum, though shifted to later grades. A new generation of young people is becoming radicalized, and that fall they got a taste of what winning feels like.

The sex-ed walkout primed students, as well as administrators, for subsequent mobilizations. In early 2019, Ford announced sweeping cuts to all levels of the public education system, from elementary schools to post-secondary institutions. Using clear messaging, Students Say No was successful in drawing out 200,000 students from more than 700 registered schools – likely an underestimate, given that SSN wasn’t able to process all 3,000 registration requests at the time – to challenge these cuts. Just two days later, 30,000 education workers and allies also rallied at Queen’s Park.