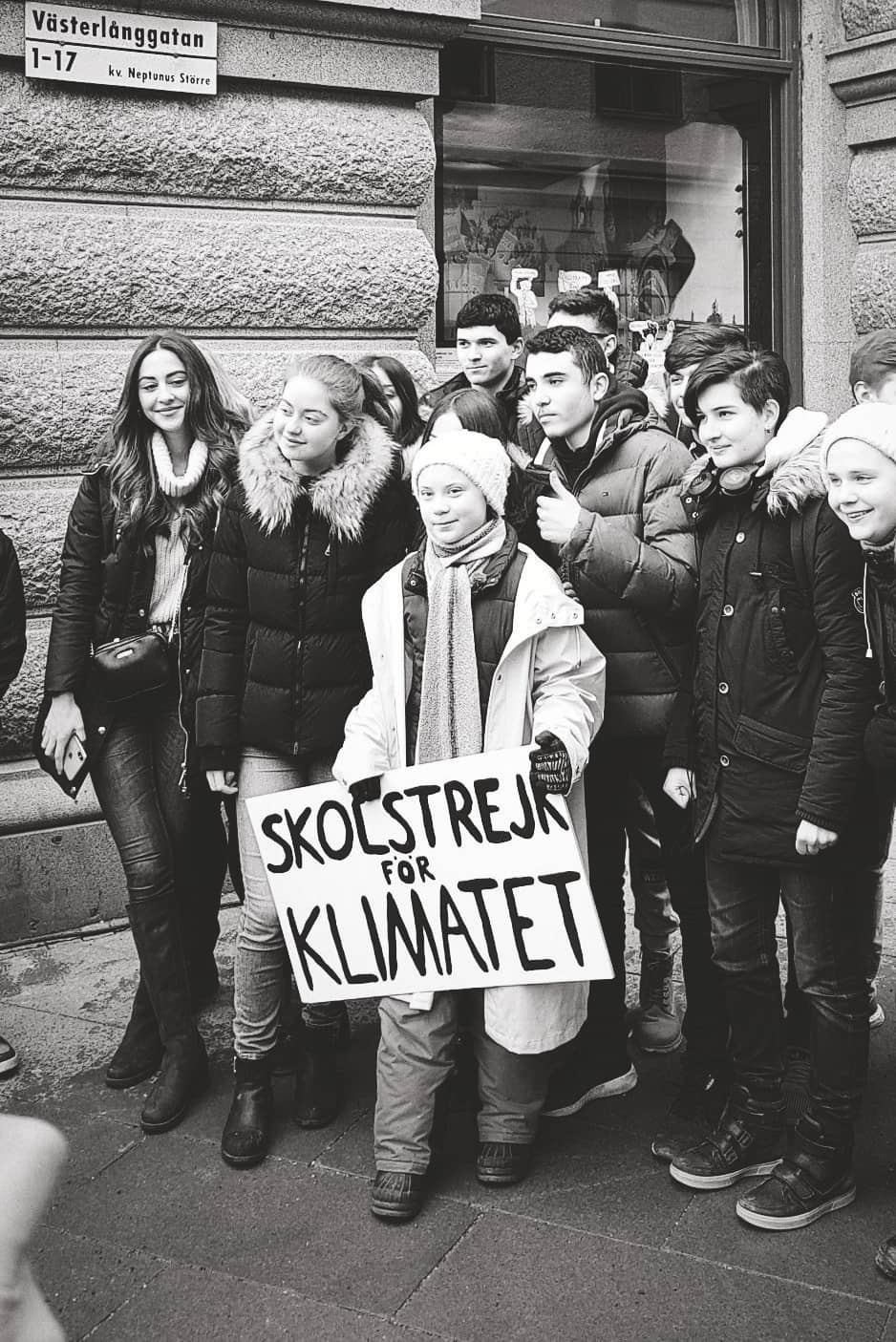 Greta Thunberg has become a global face in the fight against the climate crisis through her school strike. On 15 March, she inspired students in 120 countries to do the same.

Greta Thunberg sat down outside the Swedish Parliament. Every school day, from 20 August 2018 to the Swedish General Election on 9 September, she was there with her sign saying, “School strike for the climate”. A then 15-year-old striking school in order to draw attention to the climate crisis, she carried a lunch box and her schoolbooks in her purple rucksack, so as not to fall behind in her education. She has been nominated for the Nobel Peace Prize, lauded, harassed and criticized. Now, 16-year-old Greta is so overwhelmingly in demand, she is forced to decline interviews. But her voice nevertheless gets heard.

“Of course, my parents want me to be in school, but they also understand how important this is for me,” she told the Stockholm Direkt newspaper, along with the story of how she first heard about the climate crisis when she was in her first year of school. The teacher talked about Earth Hour, about turning off lights in order to focus attention on global warming. Greta couldn’t understand: if people were able to save the climate, then surely everything should be about just that?

When she was 12, she read an article about emissions from aircraft and became even more committed. For her it became a moral duty to do what she could. Drastic action is needed, she realized, decisionmakers must move, business must be pushed to switch to alternatives that can save the climate.

Greta’s action received growing attention and more school strikers joined her. On 7 September, two days before the General Election, a mini-festival took place in support of Greta and her climate action. Popular artists performed for free and the atmosphere, both on and in front of the stage, was solemn, as if everyone understood that this was something out of the ordinary.

Dressed in her dark blue hoodie, leopard-patterned trousers, blue sneakers, and with her hair in distinctive plaits, Greta accepted the microphone from the conservatively dressed compère and was stood on her own on stage.

With one hand in a pocket and a hesitant smile, she said that she was going to read a text she had written and sent to a newspaper, ETC. “Last summer the climate scientist Johan Rockström and some others wrote that we now have at most three years to turn around the emissions curve if we are going to be able to fulfil the Paris Agreement. Since then, more than a year and two months have passed, during which many scientists have said the same thing, at the same time as many other things have gotten worse, and the emissions have continued to increase.”

She emphasized how stupid it was to ask her why she is so passionate about the climate issue and the Paris Agreement. At intervals she was interrupted by loud cheers. Steadily, and quite unperturbed, she continued reading and pointed out that Sweden is not nearly as eco-friendly as people believe. “We in Sweden are living as if we had 4.2 Earths. Our ecological footprint is among the 10 worst in the world per capita. That means that each year Sweden steals 3.4 years’ worth of natural resources from future generations. We who belong to the future generations want Sweden to stop doing this. Now.”

MORE STORIES FROM BIG ISSUEView All