The Local Governors of the Tenth Upper Egyptian Province

The lives of kings and their families are too often the focus of the study of ancient Egyptian history. Wolfram Grajetzki turns his attention instead to the local governors of the Tenth Upper Egyptian nome in an attempt to reconstruct their line up to the end of the Eighteenth Dynasty.

The Tenth Upper Egyptian province, known as the Wadjet (‘cobra’) nome, is right in the middle of Egypt, about 30 km south of Asyut and 30 km north of Akhmim (see map opposite, top). The province was never particularly important in Egyptian history but the region was fertile; people living here were most often prosperous. Therefore, unsurprisingly, the province is full of significant archaeological sites, the most important being a series of cemeteries stretching from Qau el-Kebir (often just called Qau) in the South to Badari in the North. However, it is only at Hemamieh and Qau el-Kebir that we find monumental, decorated rock-cut tombs. Although unique monuments, none of these are on the regular tourist trails, and they are less well known than those at Beni Hasan or Aswan. The other cemeteries were mainly used by the local farming population. These local burials were simple but still contained many objects. They are often overlooked by Egyptologists, but can provide much evidence about how common people lived.

The main town within the province was Tjebu, today known as Qau el-Kebir. The Napeoleonic expedition recorded the well-preserved remains of a Ptolemaic temple at the site; however shortly after the expedition, parts of the temple were demolished during the building of a palace at Asyut, and the remaining parts were washed away by a devastating Nile flood in 1891.

Settlements in the Wadjet nome can be traced back to the Badarian Period, c. 4400 BC. In the 1920s, Guy Brunton (1878- 1948) excavated several of the province’s cemeteries, all of them on the east side of the Nile. North of Qau el-Kebir he found several smaller burial grounds belonging to the Badarian Period. People living here were mostly farmers and herdsmen. Their dead were placed in simple holes in the ground and equipped with some pottery vessels (opposite, bottom right) and with other objects such as cosmetic palettes. There are also several burials of the Naqada Period (c. 4000 to 3000 BC) in the region with similar burial goods (opposite, bottom left). People were still buried in simple holes into the ground, but new pottery types appeared, such as vessels painted with figures, and metals, such as gold and silver were now in common use. However, overall the burials give the impression that life did not change very much over these periods. 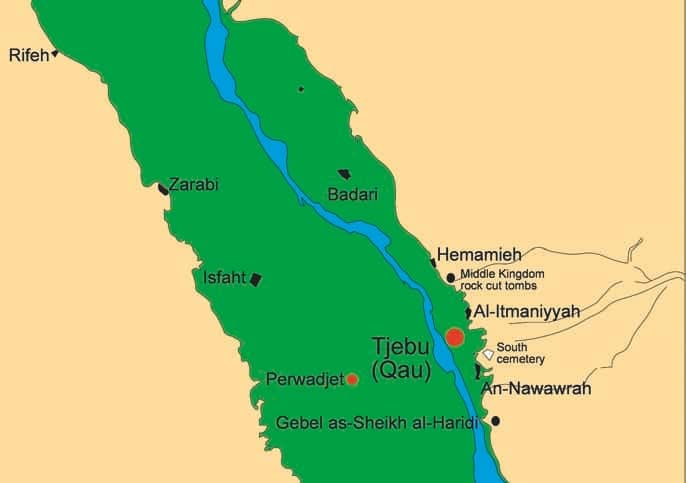 Around 3000 BC, Egypt became a unified state, with a king residing at Memphis in the North. Not much changed in the Tenth Upper Egyptian province, but it can be assumed that the region became part of Egypt proper. Perhaps local governors were installed here, but their tombs have not yet been found or identified. However, there are some Third or Fourth Dynasty brick-built mastabas with an underground tomb chamber reached by a staircase. These are certainly the burials of a new ruling class. As there are hardly any inscriptions, we do not know who exactly was buried here. But in one of the bigger tombs, a copper ewer was found with the short inscription: ‘priest of Nemty, Hetep’. Nemty was the main deity at Qau el-Kebir. It seems that Hetep was an early local priest at the main temple there. It shows that there must have been a Nemty temple early on in Tjebu, perhaps at the same place as the Ptolemaic temple built 2500 years later. 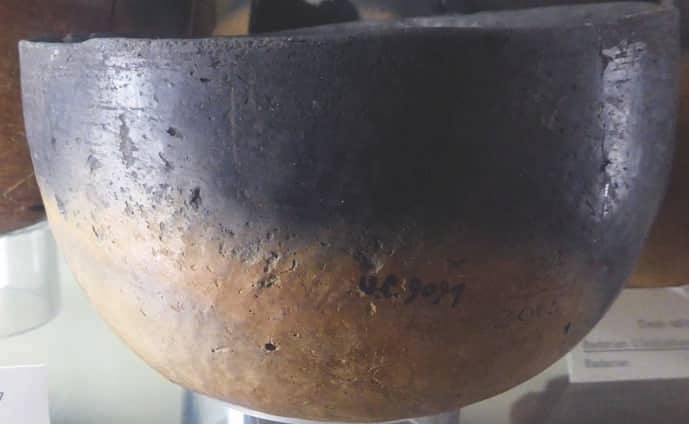 The first provincial governors of the Wadjet nome are not known from the province proper, but from Giza, in the North. It is here we find the burials of officials who were in charge of several provinces at this time. One of these officials was Nesutnefer (‘the perfect king’) who had a decorated mastaba at Giza and lived around 2500 BC. Nesutnefer was governor of two provinces: Tawer (the province around Abydos) and Wadjet. In this period, the Wadjet province was evidently ruled by an official at the royal court and not from one coming from a local family.

Further governors are attested in their rock-cut tombs at Hemamieh (see overleaf, top), within the province itself. There are two governors with the name Kakhenet (‘my Ka is foremost’); both perhaps lived at the beginning of the Fifth Dynasty, maybe shortly after Nesutnefer. Hemamieh is just about 4 km north of Qau el-Kebir and a perfect place for rock-cut tombs. The tomb chapels were carved into the rocks and were decorated inside with painted reliefs and statues of the deceased carved from the rock (see overleaf, bottom left), although regrettably few of these are well preserved today, with most missing their heads.