Qubbet el-Hawa, on the West Bank opposite Aswan,is a landmark in the landscape of the First Cataract region. It is the highest elevation of the area. Perhaps, due to this, the highest officials of Elephantine, from the mid-Sixth Dynasty onwards, decided to use this hill as a cemetery. Another important reason was that Qubbet el-Hawa was situated on the West Bank, relatively close to Elephantine, the main urban centre of the First Upper Egyptian nome.

This hill, then, became the necropolis of the highest officials of Elephantine and their wives, buried according to a well-established pattern based on administrative position or social rank: nome governors’ complexes mainly situated in the northeast of the slope, while their officials constructed their tombs in the southeast, preferably in a lower position than their masters.

Today Qubbet el-Hawa is one of the best known necropoleis of ancient Egypt, mainly due to the discovery (at the end of the nineteenth century) of long biographies carved on the tomb façades of some of the highest officials who controlled the southernmost province of Egypt at the end of the Sixth Dynasty. Particularly interesting is the decree inscribed by Harkhuf on the façade of his funerary complex, in which he tells us he was commanded by the young Pepy II to bring to the royal residence a deneg, a term which has been translated as ‘pygmy’.

Qubbet el-Hawa has attracted scholars and amateur archaeologists since the 1880’s. Unfortunately, many excavations did not follow archaeological methodology or their results were not properly published. Despite this, the potential for gaining information from the site is enormous: Qubbet el-Hawa not only contains information we would expect from an élite necropolis in Egypt, it might also shed light on the interactions between Egypt and Nubia. In addition, one of the highest officials of Elephantine, named Heqaib, who lived in the second half of the reign of Pepy II (c 2278–2184 BC), was deified after his death. This conversion into a god is a very important episode, because it helps us to understand the evolution of the funerary beliefs in the provinces, and was doubtless a consequence of the crisis occurring in the royal court at the very end of the Old Kingdom and First Intermediate Period. 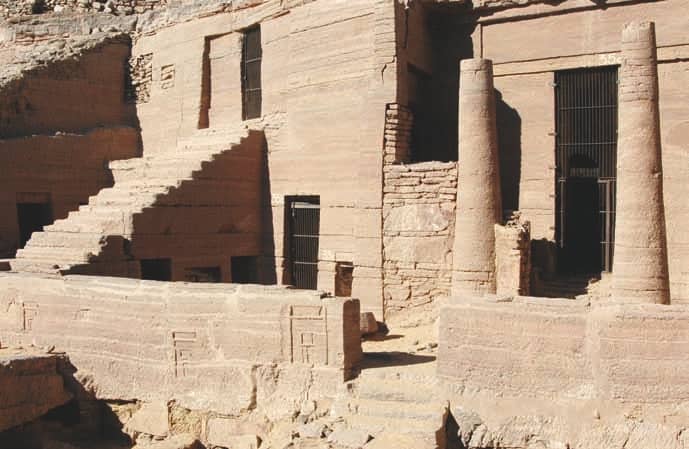 The political role played by the god Heqaib (whose tomb is shown right) is clearly visible when the Middle Kingdom king Senusret I appointed Sarenput I as nomarch of the southernmost province of Egypt. In the previous Eleventh Dynasty, this territory appears to have been controlled directly from the royal palace. Sarenput I, taking control at the start of the Twelfth Dynasty, declared himself a son of Heqaib, which means he was the heir of a god. He inaugurated a dynasty which ruled from Elephantine and for more than a century and half, Sarenput’s family constructed their funerary complexes and tombs at Qubbet el-Hawa. Although the majority of tombs were partially cleared between the end of the nineteenth century and the early years of the twentieth century, their funerary shafts and the non-decorated tombs had never been excavated until the beginning of the University of Jaén project in 2008. 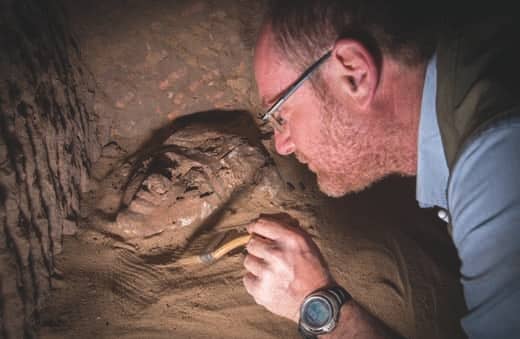 The University of Jaén Project at Qubbet el-Hawa

In 2006, in collaboration with Dr. Mohamed el-Bialy, head of the Ministry of Antiquities’ office in Aswan at that time, we designed an ambitious multidisciplinary research project for the site of Qubbet el-Hawa. The main aim of this project was to solve the questions left open by the incomplete earlier excavations. In other words, the main goal was to understand the site using the latest methods and techniques, trying to connect our work with earlier sources.