Sobek - One Crocodile Or Two? 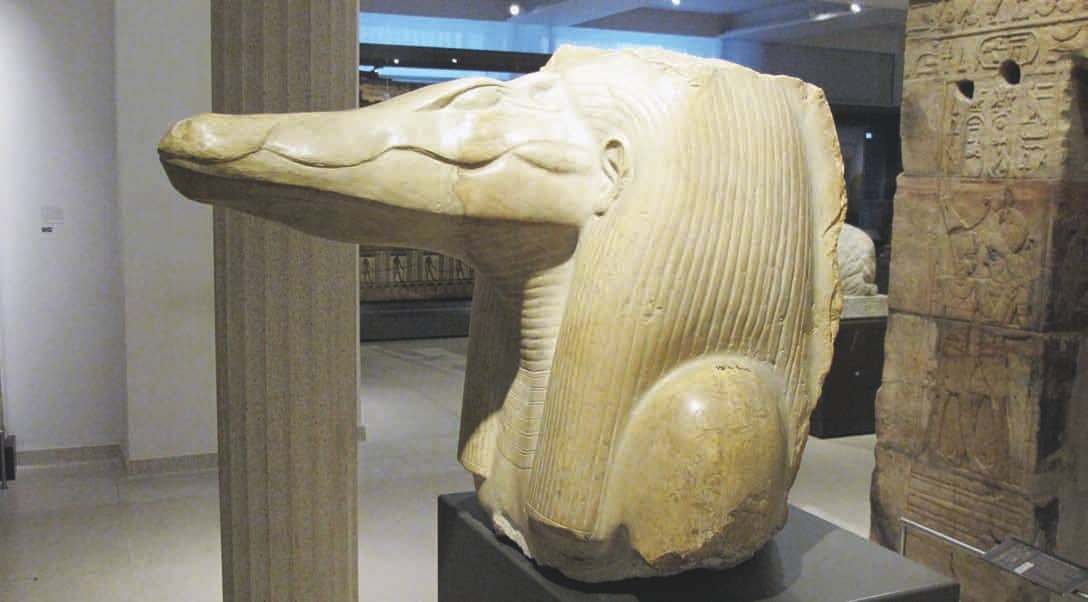 No other creature in ancient Egypt was perhaps as feared, revered and frequently depicted as the crocodile. It was one of the first animals to be portrayed in rock art, on palettes and on Naqada pottery. It was also an early hieroglyph and often used in tombs from the Old Kingdom onwards to symbolise the conflict between good and evil. It was worshipped principally as Sobek; treated as both a guardian and a demon on birthing wands and bricks and in various scenes from the Book of the Dead and other funerary papyri; and included on the protective cippus of Harpocrates. It was considered totally sacred by some, yet eaten by others. Differing beliefs even led to occasional conflict. But who was Sobek and on what actual animal or animals was he and other crocodile deities based? 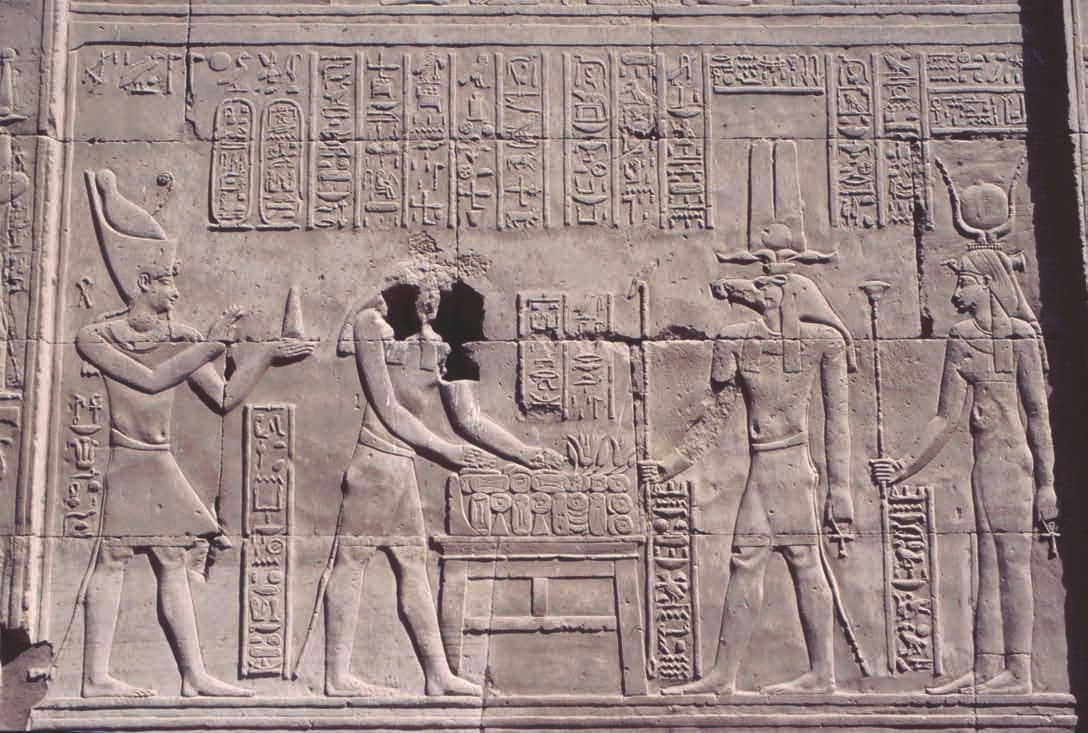 Sobek is an ancient Egyptian water deity who was first mentioned in the Pyramid Texts of the Old Kingdom (c. 2686–2181 BC) although he probably originated as a local god in Shedet in the Fayum (later Crocodilopolis and Arsinoë) and gained influence by syncretisation with other local crocodile gods. It was then believed that his sweat might be the source of the Nile but reptiles, of course, do not sweat. Diodorus Siculus, the Greek historian, in around 50 BC recorded the myth that Shedet was founded by the pharaoh Menes in gratitude to the crocodile which carried him across Lake Moeris when he was being attacked by his own hunting dogs. Spell 317 from the Pyramid of Unas described that king as the living incarnation of Sobek, and the god himself as green in colour, the son of the Goddess Neith, and an alert, raging, strong and powerful inseminator. Spells 507510 also tied him to both procreative and vegetative fertility. Thus began his associations with the Nile, pharaonic power, virility, fertility and military prowess. 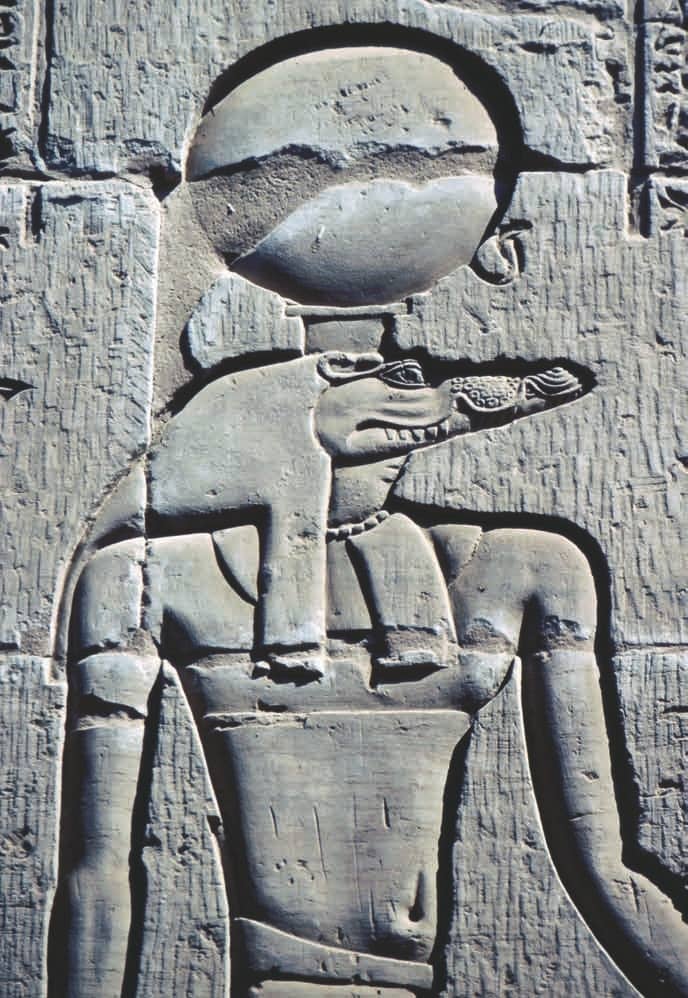 Although venerated from at least Old Kingdom times, Sobek became even more prominent during the Middle Kingdom (c. 2055-1650 BC), especially during the reigns of Amenemhat III, Sobekneferu and Sobekhotep, when he was syncretised with Horus, the Sky God of divine kingship, to strengthen the link to the pharaohs. This gave the god a far more important place in the Egyptian pantheon by his absorption into the triad of Osiris, Isis and Horus. Amenemhat III was the main builder of the Mer-Wer, the Great Canal (now known as the Bahr Yussef Canal), which ran from the Nile to the Fayum Depression, and led to Shedet becoming the capital of Egypt for a time. 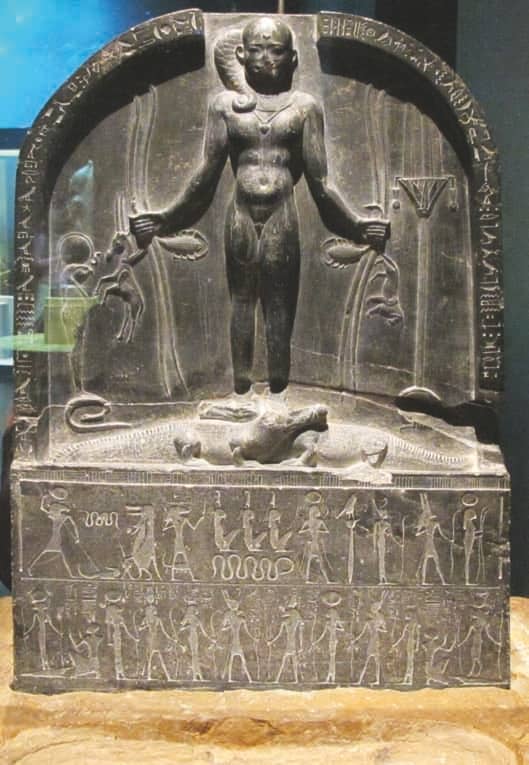 Sobek, in the form of Sobek-Horus, continued as a solar deity into the New Kingdom (c. 1550-1069 BC – see the dyad opposite, top left) but achieved his greatest prominence towards the end of that period when he was fused with Ra into Sobek-Ra. His importance then continued right through to the end of the Graeco-Roman Period (332 BC - AD 345) with many new temples being erected in his honour, and the enlargement of his numerous cultic sites, such as at Crocodilopolis, Kom Ombo, Gebel el-Silsila and Gebelein. Every effort was made to show him as having an even larger role in religious doctrine through monographs such as the Book of the Fayum. This coincided with the repositioning of Seth as a less evil god. At Kom Ombo, Sobek was regarded as the ‘husband’ of Hathor and ‘father’ of Khonsu. 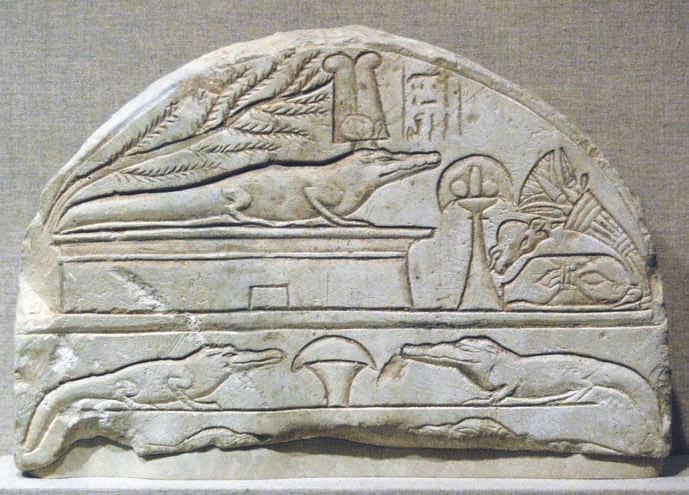 Sobek was usually depicted as either a crocodile animal lying on a shrine or as a man with the head of a crocodile, often wearing a tripartite wig. Either form could also include a headdress consisting of tall plumes, horns and a sun-disk, especially after his syncretisations with Horus and then Ra.