Egypt was the most conservative nation in the ancient world. Change was not welcome and divine order (maat) had to be maintained. This fear of change permeated the art of ancient Egypt. Before the painters in the Valley of the Kings created those beautiful figures, a grid was laid out on the walls so the proportions would be just like they had been for centuries. There was no word for ‘creativity’ or for ‘artist’ in the ancient Egyptian language. There were ‘carvers’, ‘painters’, but not artists. These were craftsmen, replicating what had been done in the past. If you needed a new statue of a god for the temple, you took out the old one and had it copied. Egyptian art is almost never signed. It was not viewed as a creative act. We attribute the iconic bust of Nefertiti to the sculptor Thutmose, not because he signed it, but because it was found in his studio, and we think it was his studio based on the flimsiest of evidence – a horse blinker found there with ‘Thutmose’ written on it. 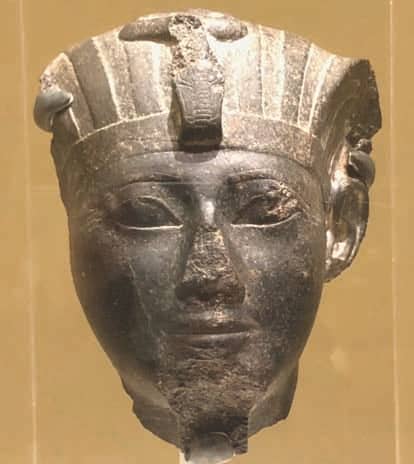