A New Role For The Four Sons Of Horus?

Joan Padgham investigates the significance of the funerary ‘sunrise scene’ and the role the four canopic deities played in representing the deceased.

The Twenty-second Dynasty of the Third Intermediate Period (c. 945-715 BC) saw the creation of a vignette called the ‘sunrise scene’ painted on a new type of funerary case called a cartonnage. The scene shows the solar deity Ra ascending to the sky and included the Four Sons of Horus (see right and detail, opposite top). Traditionally these funerary deities featured on canopic jars and in scenes of mortuary rituals such as mummification and the protection of the dead. To give them a significant presence in a solar scene implies that they had been given a new role. Examination of the scene reveals details that suggest the Sons of Horus were intended to represent the deceased owner of the cartonnage in the presence of Ra.

The sunrise scene symbolises the ascension of the solar deity each dawn from the realm of Osiris. There are often two falcons depicted; the upper one is a ram-headed falcon with a golden solar disc and outstretched wings, and it symbolises Ra rising to the sky. Osiris sometimes stands with the Four Sons (see page 22, top) or is represented by an Abydos fetish below the falcons (see right). Immediately under the falcon’s wings the Sons of Horus stand facing the deity, two on each side. They are significantly large and dominant, indicating their importance and, with the exception of Duamutef (whose jackal ears occupy the top of his head), Imsety, Hapi and Qebehsenuef each have a cone. 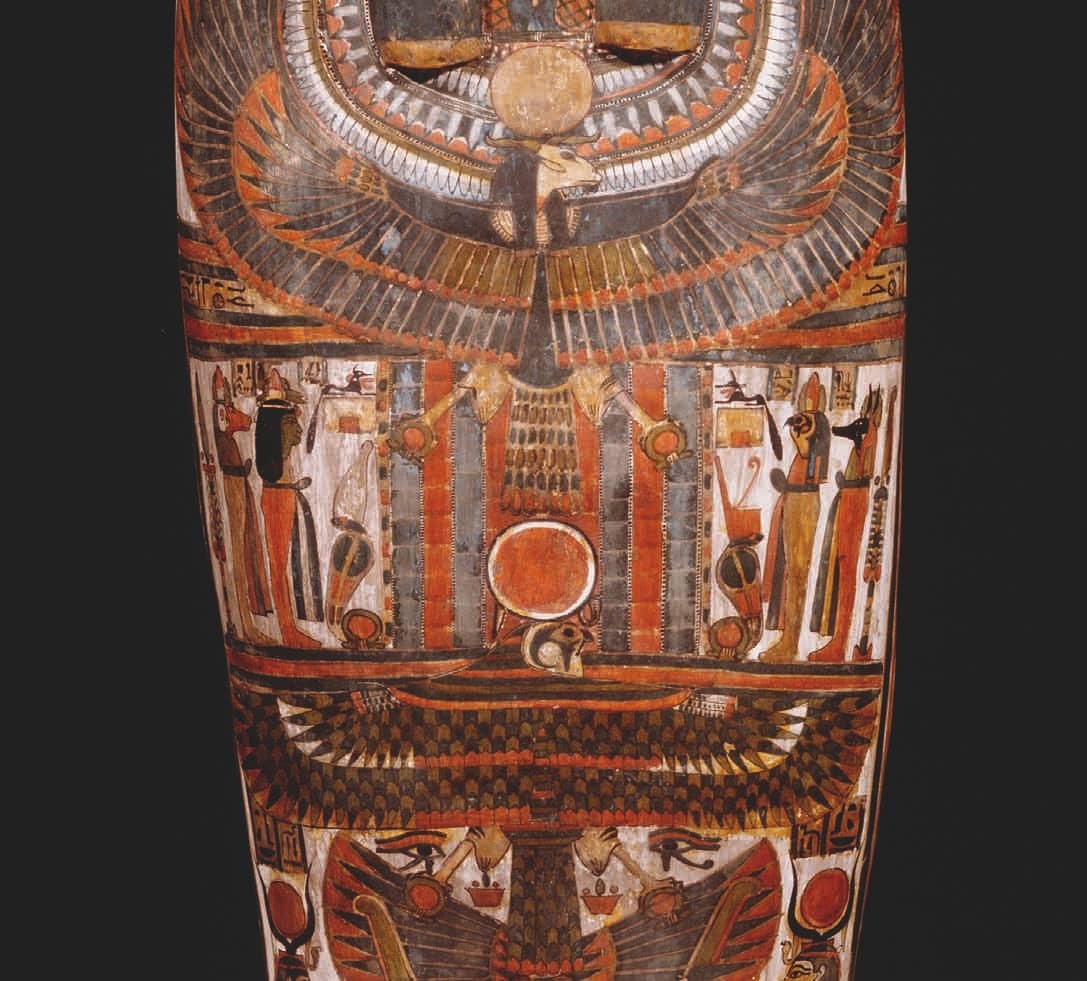 The Four Sons and the Deceased

The Twenty-second Dynasty was the first time that a cone was shown on the head of the Sons of Horus. Created in the New Kingdom it was originally only shown on images of people and their ba-bird. Placing this symbol on the Sons could be an indication that they were in fact the deceased cartonnage’s owner and this possibility is supported by the inclusion of other elements in the scene. In some, the Sons are given the title ‘Osiris’, written before their name. This accolade was only given to a deceased person and designated them as having attained the right to be in the presence of Osiris.

The name of the Son of Horus is sometimes followed by the phrase maa-kheru meaning ‘True of Voice’ or ‘Justified’. This phrase was only used with regard to deceased individuals whose heart had been judged as pure. Those proclaimed ‘True of Voice’ could join the divine company of Ra, Osiris and other afterlife deities. These two terms which are addressing them as the deceased – ‘Osiris Hapi and Duamutef True of Voice’ – can be seen written in hieroglyphs next to their figures on the cartonnage of Panehsy (opposite, bottom right).

Further evidence of the human identity of the Sons of Horus is found in the sunrise scene of Tameramun (page 22, top). She gave them female dress and wrote her name between Imsety and Hapi and Qebehsenuef and Duamutef. In several other examples, women gave the figure of Imsety a full female ‘enclosing’ wig as if to identify themselves as that deity. This female wig can be seen on Imsety on the cartonnage of Takhateru (see above). Giving them human accolades and human dress indicates that the image of the Four Sons of Horus was intended to portray the deceased. 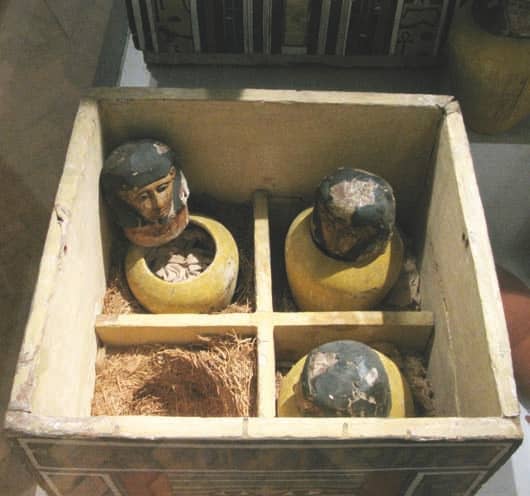