“We're overdue a drunken night out together!” 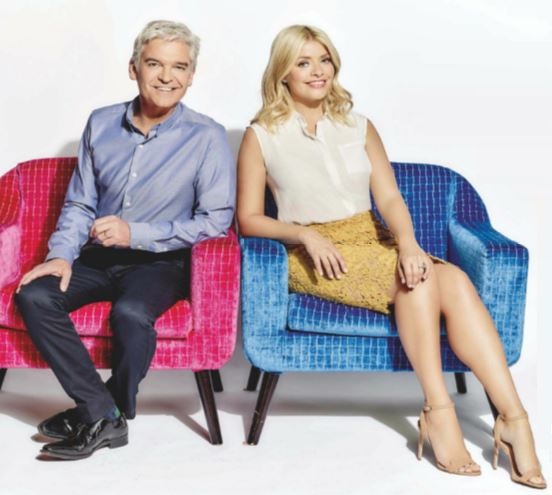 2018 is a big year for Holly Willoughby. She’s about to head to the jungle to host I’m A Celebrity with Declan Donnelly, and This Morning is celebrating its 30th anniversary. We talk exclusively to her and co-host Phillip Schofield about tricky guests, pulling pranks – and their unbreakable bond…

They go together as naturally as fish and chips or a horse and carriage. Phillip Schofield and Holly Willoughby’s easy chemistry on ITV’s This Morning has, over the past nine years, made them one of the most popular duos on TV. And off-screen they’re just as close, hanging out with each other’s families and even meeting up on holiday. Holly, 37, is married to producer Dan Baldwin, and they have three children: Harry, nine, Belle, seven, and Chester, three, while Phil, 56, is married to Stephanie Lowe and they have daughters, Molly, 25, and Ruby, 22.

And with This Morning celebrating its 30th anniversary this month, the pair will also be part of a prime-time documentary, This Morning – 30 Unforgettable Years. Here, they talk to us about the ins and outs of their on- and off-screen relationship, and why they believe This Morning has become one of the longest-running daytime shows in British history.

What are your earliest memories of watching This Morning?

P: I watched the launch day. I was at BBC Television Centre for Going Live! [Phil presented the show until 1993] and we all stopped the meeting to watch it. It was really exciting, a two-hour live TV show, and we wanted to see what it was like.

H: I would have been seven years old at that time, so I would have been at school, not watching daytime telly. The only time I got to see the show was if I was off sick. I do remember those days under a duvet, sitting with This Morning on, and my soup or whatever, feeling poorly. Not at any moment then did I think that 30 years later, I might be hosting it. It’s bizarre.

Why do you think it was a success straight away?

P: They quickly understood the audience. Throughout the years, whoever was presenting it, it always remained current and still had a massive heart.

H: Obviously the original presenters Richard and Judy were married, but it was a family in a broader sense: they had Dr Chris, the family GP, they had [agony aunt] Denise [Robertson]. It was a real family affair, not a manufactured show.

You started presenting at different times: Phil with Fern Britton in 2002 and Holly in 2009. Do you both remember your first days?

H: I remember being utterly terrified! I was a huge fan of the show by then. Watching This Morning is just what you do, whether you’re avidly watching an item that’s really grabbed you, or it’s on in the background as you’re pootling around. And I just remember thinking, “How am I going to do this?” because I didn’t want to muck it up. I felt a lot of pressure.

P: I was eased in a bit because I’d been a guest a number of times, and then I was an occasional stand-in host a few days, before I started presenting on Fridays with Fern. It happened gradually

Did Phil look after you on your first day, Holly?

H: No, he bloody didn’t! I was sort of holding onto him for dear life and just before we went live he went, “I’m off”, and he ran away!

H: You have to learn pretty quickly, but I did have the master teaching me, so I knew I was in safe hands.

You’d already presented ITV’s Dancing on Ice together for three years, of course.