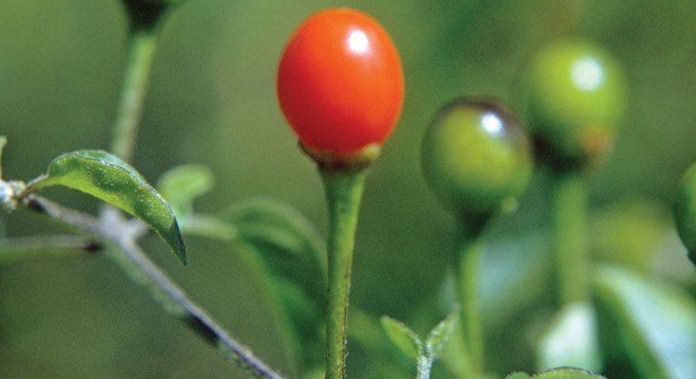 A journey through the back roads of Sonora gave Dave Dewitt a better understanding of the coveted pepper plant.

MY AMIGO ANTONIO SWEARS THAT THE MOTTO OF THE SONORAN BUS LINES IS “BETTER DEAD THAN LATE,” AND I BELIEVE HIM. The smoke-belching buses were flying by us on curves marked by shrines commemorating the unfortunate drivers whose journeys through life had abruptly ended on this mountain road. We waved the buses on and cruised along at a safer speed to enjoy the spectacular vistas on the way to the valley of the chiltepíneros.

It was November 1990, the time of the Sonoran chiltepín harvest, yet the temperature was in the upper 80s. My wife Mary Jane and I had accepted an invitation from Antonio Heras to visit the home of his mother, Josefina Durán, aka the “chile queen,” who lives in the town of Cumpas. From there, we journeyed through the spectacular scenery of the foothills of the Sierra Madre range—chiltepín country. Our destination was the Rio Sonora valley and the villages of La Aurora and Mazocahui.

As we drove along, Antonio and I reminisced about our fascination with the wild pepper.

During the early days of Chile Pepper magazine, both of us had attended a symposium on wild chiles that was held in 1988 at the Desert Botanical Garden in Phoenix. The leader of the conference was the ecologist Dr. Gary Nabhan, author of Gathering the Desert, the then director of Native Seeds/SEARCH and an expert on chiltepíns. Other chile experts attending included: Dr. W. Hardy Eshbaugh, a botanist from Miami University of Ohio; Dr. Jean Andrews, author of Peppers: The Domesticated Capsicums; and Cindy Baker of the Chicago Botanical Garden.

As the conference progressed, I was amazed by the sheer amount of information presented on chiltepíns. Botanists believe these wild chiles to be the closest surviving species to the earliest forms of chiles that developed in Bolivia and Southern Brazil long before mankind arrived in the New World. The small size of the fruits was perfect for dissemination by birds, and the wild chiles spread all over South and Central America, and up to what is now the United States border, millennia before the domesticated varieties arrived. In fact, Dr. Eshbaugh believes they have the widest distribution of any chile variety; they range from Peru north to the Caribbean, Florida and Louisiana, and west to Arizona.

There is a wide variation in pod shapes, from tiny ones the size and shape of BBs to elongated pods a half inch long. By contrast, domesticated piquins have much longer pods, up to three inches. The chiltepíns most prized in Mexico are spherical, and measure five to eight millimeters in diameter. They are among the hottest chiles on Earth, measuring up to 100,000 Scoville Heat Units.