Fish Out Of Water 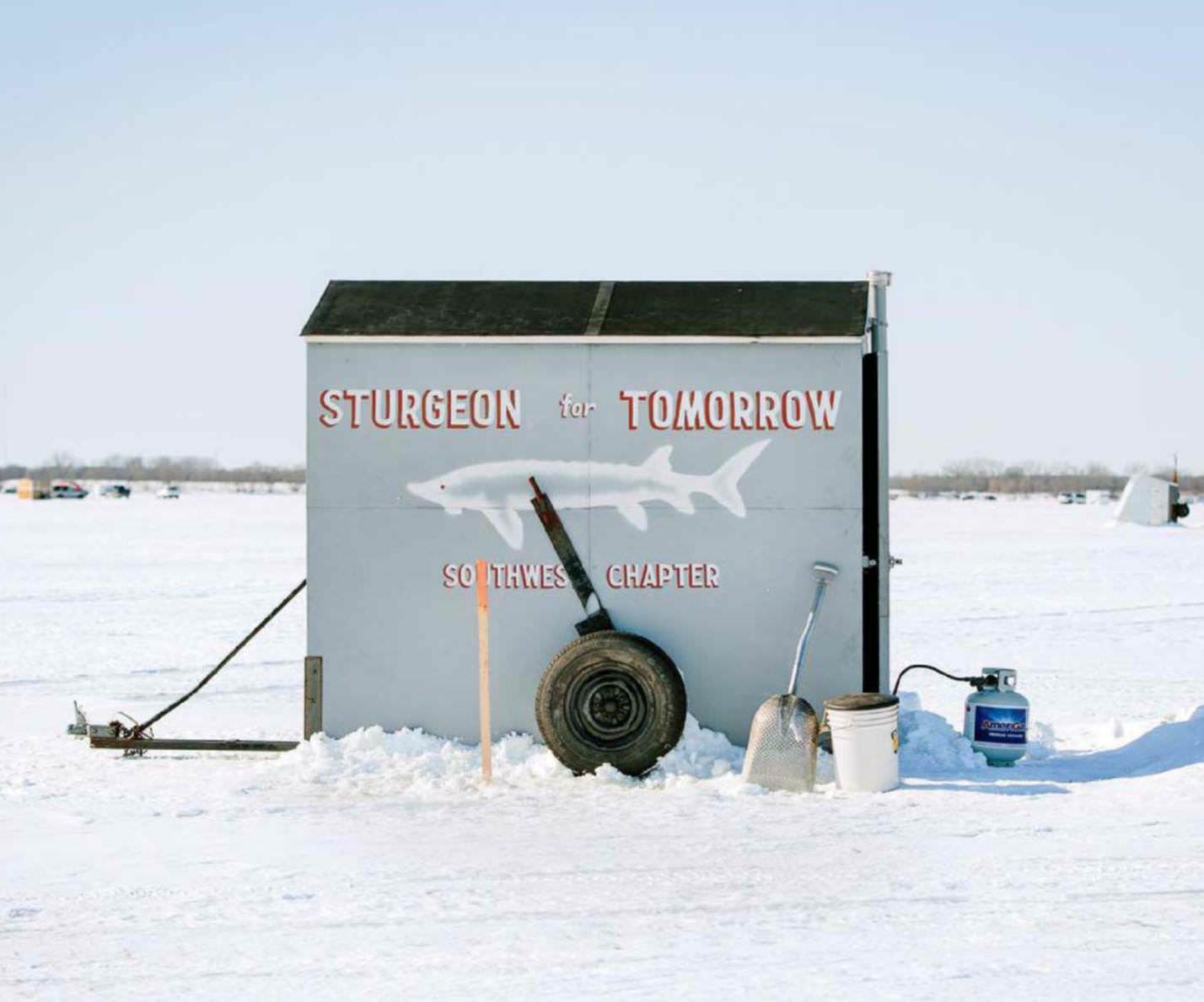 What draws people to isolate themselves in shanties on a frozen lake in hopes of spearing a massive sturgeon? Julia Kramer goes fishing.

What draws people to isolate themselves in shanties on a frozen lake in hopes of spearing a massive sturgeon? Julia Kramer goes fishing

I. HOW TO DRIVE ON A FROZEN LAKE

Just to be safe, do not wear a seatbelt. Watch for heaves: ridges of snow indicating that the ice below it has cracked, like the fault line of an earthquake. When you get to a heave, drive alongside it until you find a bridge. In the context of Lake Winnebago in February, a “bridge” is two parallel metal tracks strong enough to support the weight of a pickup, laid down across particularly gaping holes in the ice. And keep the windows rolled down. So you can get out. Just in case the rental car you’re un-seat belted into hits a crack in the ice and plummets into freezing water.

That is the advice given to me—a Chicago-born 30-year-old who has never regular-fished, let alone ice-fished—by the people of Fond du Lac, Wisconsin. And it is the advice that I followed over the course of the three days I spent pondering my mortality on a 215-square-mile lake.

I was here for the opening weekend of the annual sturgeon-spearing season. For generations men and women have hauled homemade plywood-and-sheet metal structures called shanties onto this frozen-over lake, sawed holes into the ice, and held out hope that this will be the year—the year they spear a sturgeon that could weigh upward of 100 pounds. The tradition has little to do with actually eating the fish; it’s a sporting event and a community gathering. In that spirit, the Fond du Lac Area Convention and Visitors Bureau began organizing an accompanying festival in 2016 called the Sturgeon Spectacular. The activities advertised to locals included an ice hockey game, a fat-tire-bike race, a chili crawl, live polka music, a 5K run, Siberian dog–sled rides, and a bonfire.

I expected these festivities to take place on the type of picturesque small town lake we used to go pontooning on at summer camp in Wisconsin. What I encountered, driving in on Highway 41, was a stomach-dropping subarctic landscape: a desolate abyss, with metallic huts scattered on the deserted ice like “Oregon Trail” wagons abandoned after a cholera epidemic.

What, again, was I doing here? It all went back to a night in a dive bar in Milwaukee a few years earlier, when I first heard about the spearing season. I became fascinated by the idea that sturgeon—often prized for their caviar— were not only a delicacy in Russia but also important to a community just over two hours north of where I grew up. So one day I called the visitors’ bureau, spoke with some very nice people, and received the names of a few folks in the area who might be willing to host a visitor to the land of the lake sturgeon.

This is how I ended up at the home of landscape designer Paul Muche. He drove me out onto the lake in his GMC pickup, icy air streaming in through the rolled-down windows with the gusto of a million freshly bought A/C units. On my drive up from Milwaukee, I’d pulled off the highway at an REI, swaddling myself in Smartwool socks and intensely warm boots. I thought I was prepared.

Muche parked the truck next to a shanty he was setting up for his 12-year old son and grabbed his chain saw from the back seat. Within five minutes of stepping onto the ice, my fingers went numb, the ink in my pen froze, and I can only imagine what thoughts must have run through Muche’s head when he saw me take out my iPhone and hold it up in the air, recording a video of him for a solid ten seconds before my device promptly shut itself down. I brought out my recorder, hoping it might pick up more than just the howling of the wind. (It didn’t.) There was nothing I could do but watch as Muche wielded a chain saw through 16 inches of ice, carving out a rectangular fishing hole. Sturgeon-spearing season started at dawn the next morning.

II. HOW TO SPEAR A STURGEON

Sturgeon in Lake Winnebago cannot be “caught.” The only legal way to obtain one is with a spear: Think six-foot-long, 15-pound, five-pronged pitchfork. The spearhead is attached to a rope, which is essential for pulling up a massive fish fighting for its life.