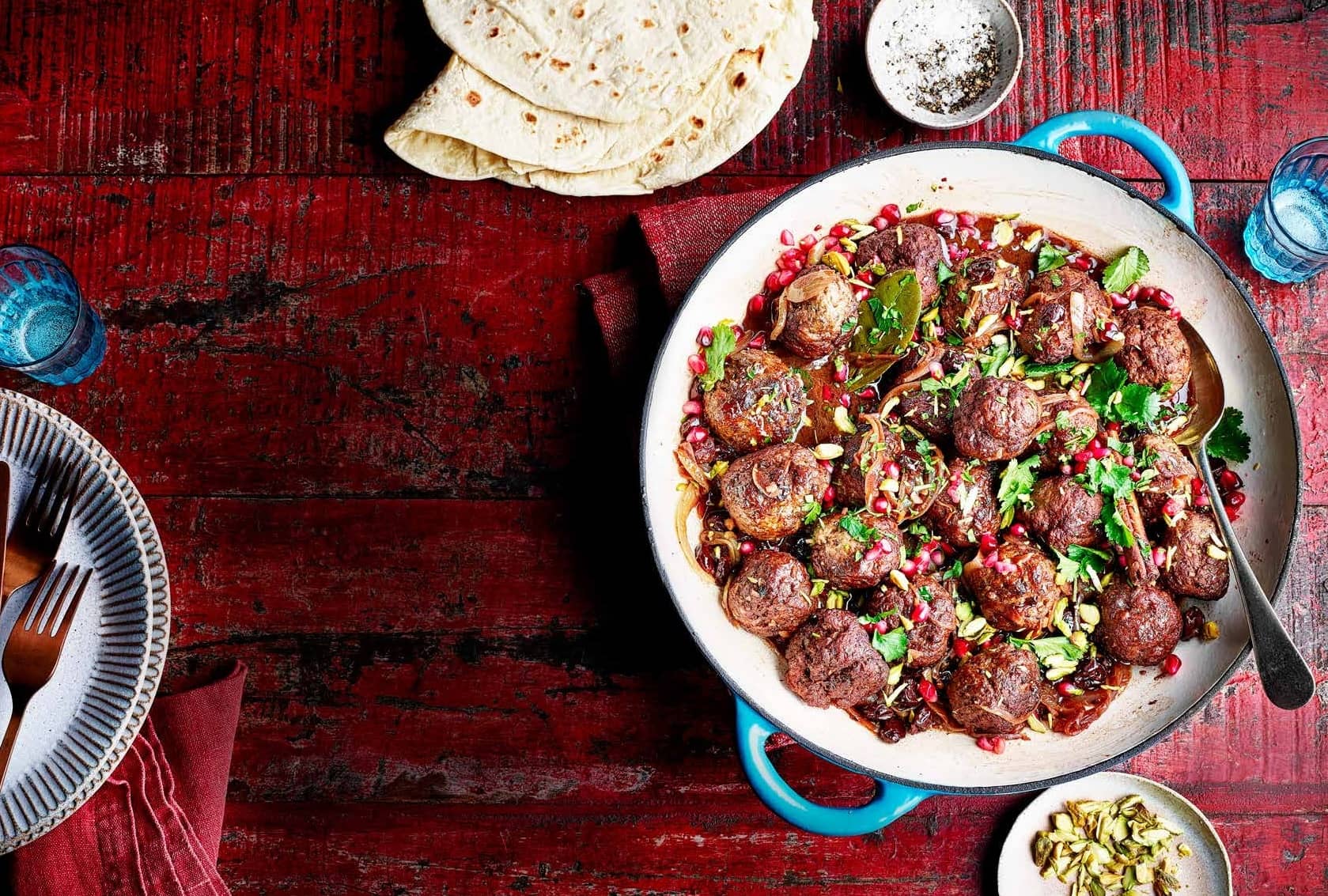 Middle Eastern food was the first cuisine I fell in love with when I arrived in London in 1985. I’d go to a little row of shops in Kensington, usually in the evening when they turned on the fairy lights above the name of each shop. There was a Persian restaurant; a pastry shop with a window full of diamond-shaped lozenges of baklava and pistachio-stuffed fingers of filo; and a grocer that sold everything from fat, honeyed quinces and bouquets of dill to tins of caviar from the Caspian Sea. There were boxes, jars, packets and bottles that could take you to places with turquoise skies. Claudia Roden’s descriptions of the food and the gatherings she had grown up with in the Middle East made me want to understand, smell, taste and eat this culture more than any other.

My first bottle of pomegranate molasses came from that Kensington shop and it was precious. I still buy the same brand – Cortas – because I like the label (it’s Lebanese and a little on the tart side) although there are now many others available. I was surprised by its dark colour – it looked like cough mixture and had a similar sticky viscosity. The bright crimson of pomegranate juice disappears as it’s boiled until thick (some brands add sugar – try a few and see which you like). It’s intense, so you have to use it carefully. It’s perfectly balanced between sweet and tart – fruitier than tamarind paste, almost plummy – and it can overwhelm other components in a dish. I love it in dressings, and not just in dressings for Middle Eastern dishes; it’s a fantastic glaze when mixed with honey, cumin and garlic, too (but pay attention to the temperature and the cooking time, as the sugars in pomegranate molasses burn easily).

It was a long time before I used pomegranate molasses to flavour a soup or a braise, but it deepens flavour and adds a rich fruitiness, as long as you don’t use too much. The most surprising use for it I’ve ever discovered was in a recipe from the Iranian food writer Najmieh Batmanglij. She includes it in an Azerbaijani spinach and pomegranate soup, which is sweet and tart and earthy all at the same time.

It’s a good idea to eat a little spoonful of pomegranate molasses every so often to remind yourself what it tastes like – it’s one of those ingredients we add but rarely experience neat. Its use in sweet dishes might surprise you, but it’s wonderful in sugar syrups to pour on orange and date compotes.

Back in 1985, I had to make two bus trips to buy my precious bottles; right now there are three in my fridge. Familiarity has not bred contempt, though. To me, pomegranate molasses is still special.

Lamb meatballs with sour cherries, pomegranates & pistachios Do try to get dried sour cherries for this. You need a balance of sweet and sour.