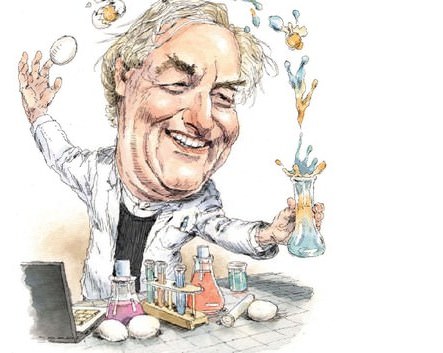 Herv This, the father of molecular gastronomy, thinks the meals of the future should be constructed from chemical compounds.

“What about having the potato in the steak, instead of french fries on the side?,” This (pronounced Tees) asked the standing-room-only crowd of pastry chefs, professors, and fermenters who had packed an NYU lecture hall last October to hear him speak. He used a microwave propped on a table as a lectern, and moved aside his other ingredients the dehydrated egg, along with vegetable oil, salt, and sugar to rummage through a case of clear glass vials stoppered with black lids. He unscrewed a small bottle of methional oil, which has a cheesy-potato flavor, and the room’s fresh-carpet smell gave way to baked potato mixed with high-school gym. “So here is some potato,” he said, pouring the methional into his dough. “How many potatoes do you need?”

At a time when much of the culinary world believes in farming like pioneer settlers and looking its meat in the eyes, This wants us to abandon peas and carrots (“Middle Ages!”) for their constituent parts glucose, sucrose, cellulose, amino acids, and more. He showed his audience a picture of wooden shelves stocked with rows of identical white containers and a scale. “This is the kitchen of the future,” he declared. “Beautiful boxes some contain liquids, some contain powder.”

A celebrity academic who advises Michelin-star chefs and government officials, This is a kitchen revolutionary who seems to dash of cooking manifestos at the rate at which other people tweet and who issues the unqualified declarations of a prophet. He is regarded as the founding father of molecular gastronomy, having spent his career pushing science into the kitchen—first to explain traditional cooking, then to dismantle it. He has sent sliced onions through an MRI machine and invented an equation for aioli. He has mummified eggs, unboiled eggs, cooked eggs without heat, and turned hard-boiled eggs transparent.