The Kings Of Service 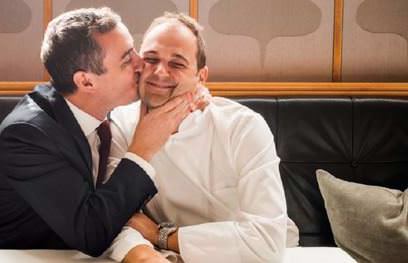 Will Guidara and Daniel Humm are on a quest to make New York Citys Eleven Madison Park the greatest restaurant in the world-one perfectly choreographed, exceptionally hospitable meal at a time.

So amiably and briskly was Will Guidara recounting his eventful career in the restaurant business that it took a moment to catch up with the discordance of something he had said a few sentences earlier: “Fine dining and hospitality don’t necessarily go together.”

Wait, how’s that again? Isn’t fine dining supposed to represent the apotheosis of hospitality? More claret, madame? May I debone the turbot for you, monsieur?

Guidara clarified: He was speaking of the many circumstances that can make a fancy-restaurant experience feel “cold”—stiffly formal service; an unnavigable wine list; a highfalutin cult-of-chef ethos to the point where the customers feel like they’re doing the kitchen’s bidding rather than the other way around.

And, indeed, there are many reasons, in theory, to be totally intimidated by the prospect of dining at Eleven Madison Park, the Manhattan restaurant that Guidara runs with co-owner and chef Daniel Humm. It is as highly decorated as a restaurant can be, with four stars from the New York Times, three from the Guide Michelin, and a Grand Award from Wine Spectator. It is expensive, offering no à la carte options, only a $225-per-person degustation menu. It occupies an imposing, high-ceilinged, park-facing space within the Metropolitan Life North Building, a muscular Art Deco tower whose entryways are framed by mighty limestone arches.

Yet Guidara and Humm have engineered Eleven Madison Park to be an unrelentingly warm place, examining and reexamining every facet of the visiting experience to see whether it can be made more hospitable. There is neither a reservations desk nor a coat-check area, only a brace of greeters who, through some rigorously inculcated organizational jujitsu, know both how to welcome you upon arrival and how to reunite you with your outerwear at night’s end without the grim transactional aid of a numbered plastic ticket. There are captains and sommeliers trained to take your measure and gauge how gabby they should be with you, internally sensing whether you are projecting “Make yourselves invisible, people,” or “Gimme some New York sass, hon.” There are courses that cleverly and disarmingly acknowledge the New York City setting, such as a “Beef” presentation that is actually a few slices of house-made pastrami, optimally steamed and marbled and served with little rounds of rye bread (and proportionally a more sensible way to eat pastrami than the Dagwood servings you get at delis).

And there are Guidara and Humm themselves, one or both of whom stop by to chat with nearly every customer—a little bit of trattoria-style neighborliness amid the big-night-out trappings.

The two men make no bones about it: Their aim is for Eleven Madison Park to be the best restaurant in New York City— which, depending on your level of New York chauvinism, might also mean the best in the United States, or even the world. Over the last three years, Eleven Madison Park has been the only American restaurant to crack the top five of the “World’s 50 Best Restaurants” list sponsored by S. Pellegrino (it is currently ranked number five), and Guidara and Humm have designs on the top spot. “You can be dismissive of stars and lists, but we decided to play the game,” said Humm. “It’s a form of motivation. We stay humble, but do we want to win? Definitely.”

What sets the chef and his restaurateur apart from others pursuing this goal is that theirs is a double act. Guidara and Humm, Humm and Guidara—they’re always spoken of this way, in tandem, equally weighted, which is something of an anomaly. The other U.S. restaurants in their class, while generally not slouches in the service department, are primarily chef-identified: Thomas Keller’s French Laundry and Per Se, Daniel Boulud’s Daniel, Joshua Skenes’ Saison, Grant Achatz’s Alinea and Next.