iPhone 11 Vs. Android's Best: An Underdog Does Just Enough To Take Down The Champ 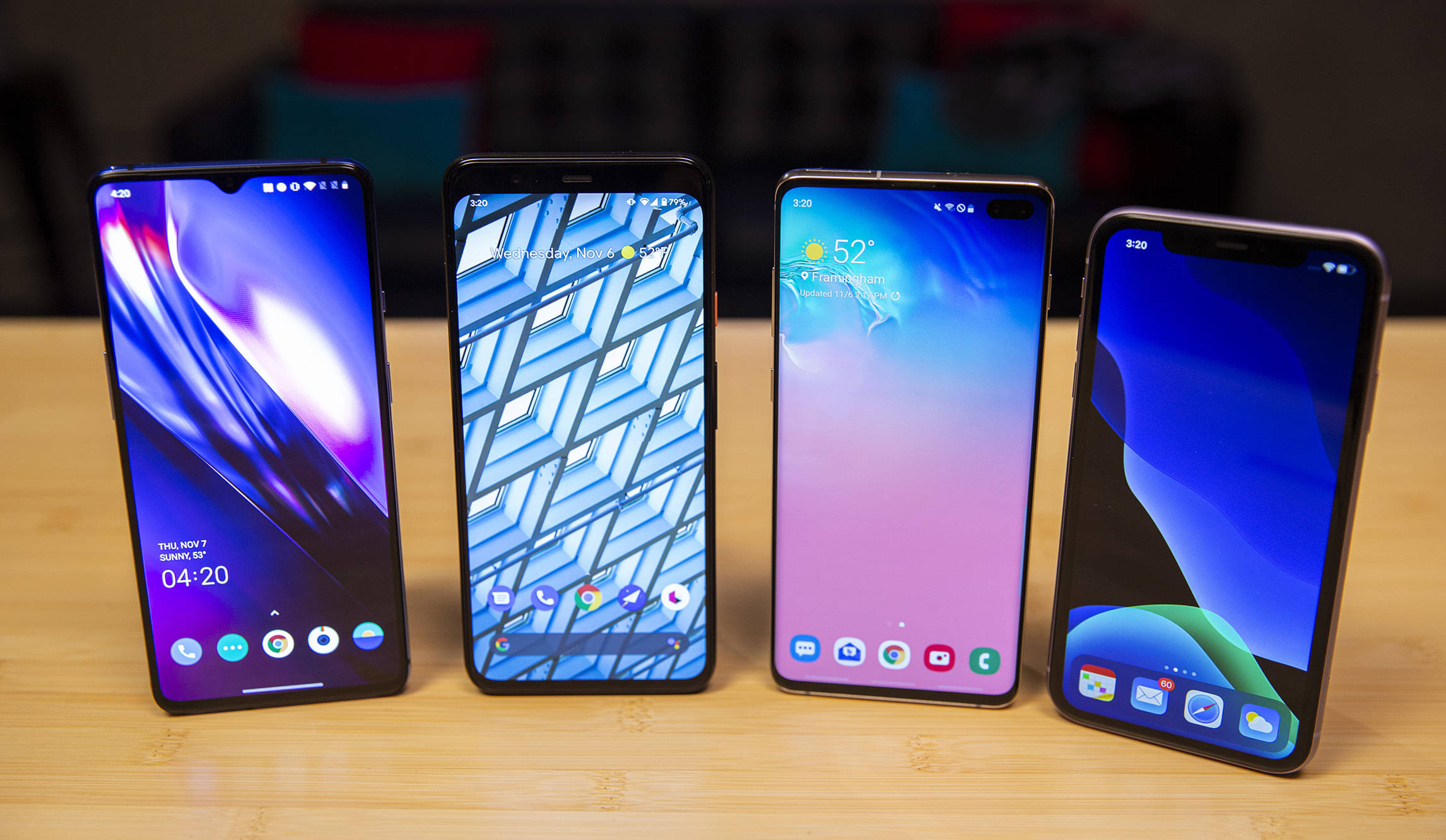 The iPhone 11 is an incredible phone, but there’s one I like a little better.
Michael Simon 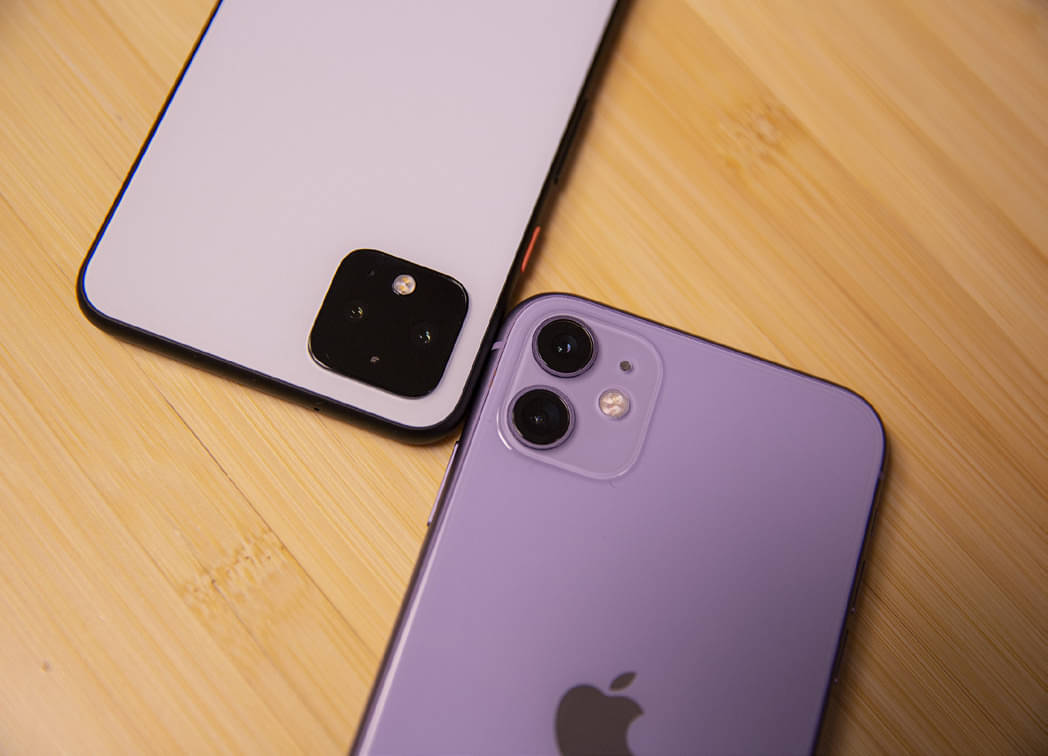 Three phones compete against the iPhone 11 this year:

Samsung Galaxy S10+: I chose this model (go.pcworld.com/nwsm) because it’s cheaper than the official flagship Note 10+. Also, compared to the S10, it’s only $100 more and equipped with a much bigger battery.

Google Pixel 4 XL: The newest Pixel phone (go.pcworld.com/nwpx) has a laundry list of issues, but it’s Google so it gets the nod. Plus it has a better screen and bigger battery than the smaller one.

OnePlus 7T: OnePlus is on a roll. The two phones released in the United States in 2019, the 7 Pro and the 7T, raised expectations for what an affordable model can deliver. The newer 7T (go.pcworld.com/nw7t) offers killer specs and a price that undercuts the iPhone 11’s. 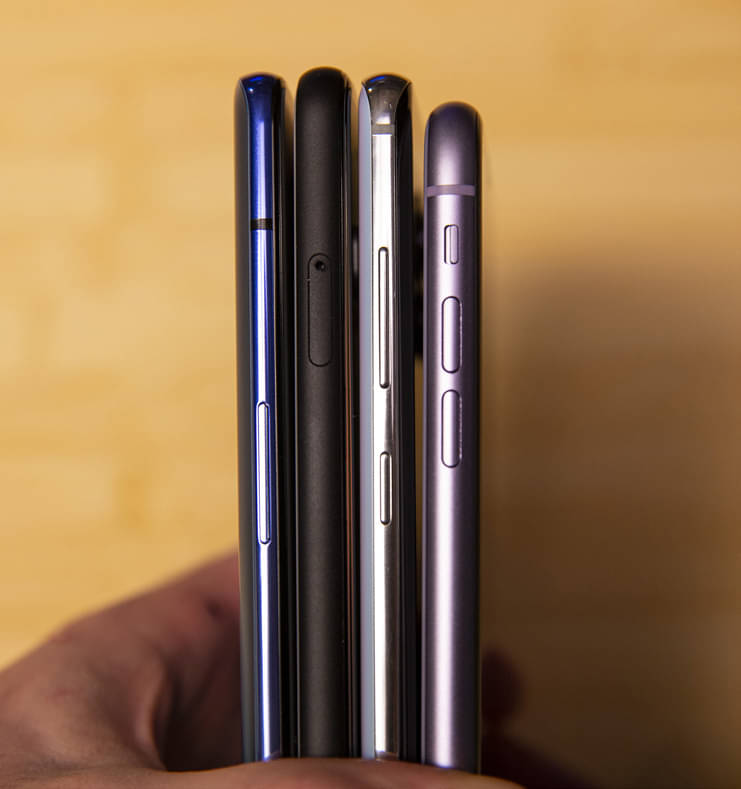 While Samsung pushed design boundaries with an impressive reimagining of the Galaxy S10, the iPhone is starting to feel a little stale. It’s more symmetrical than the other phones here, but the notch, the thickish bezels, and the screen-to-body ratio leave much to be desired. It’s also the thickest of the bunch at 8.3mm.

The giant square camera is a polarizing look, and it makes the iPhone 11 wobble when it rests on a table. The camera bump matches your chosen handset color, and while the new purple and green are nice, the glossy back picks up fingerprints early and often. Rumors suggest that Apple may dump the notch and make other changes for the iPhone 12. I hope that’s the case.

If the iPhone 11 is bland, the Pixel 4 XL is just plain blah. It loses last year’s notch for a sizable forehead, a small chin, and chunky side bezels. Like Apple, Google has added a square camera array in the upper left corner, but the Pixel 4’s bump is black regardless of body color.

I do like Google's choice of materials, however. The luxurious frosted glass now covers the entire back of the phone, and it resists fingerprints, scratches, and smudges. The brushed-aluminium sides echo the frosted look, and the color options—which adds orange this year to the classics black and white—are appealing. I love the colored accent button. If Google ever decides to get serious about smartphone design, it should start with the materials and work backward.

Samsung’s S10+ continues to refine the Galaxy look. The top and bottom bezels are barely-there slivers, bringing the screen-to-body ratio close to 90 percent, but it feels like more because the edges of the screen drape over the sides. The back of the S10+ is just as pleasing, with a horizontal camera array set against a glass available in fantastic colors. Yes, it’s a fingerprint magnet, but so is the iPhone’s back. And unfortunately the lack of bezels brings visual and functional problems that Samsung isn’t yet prepared to address.

The oddball is the selfie camera. Lacking enough bezel to hide sensors, Samsung opted for a “hole-punch” camera literally embedded in the display, peering through a black circle in the upper right corner. Its off-center placement and funky design make it an eyesore. 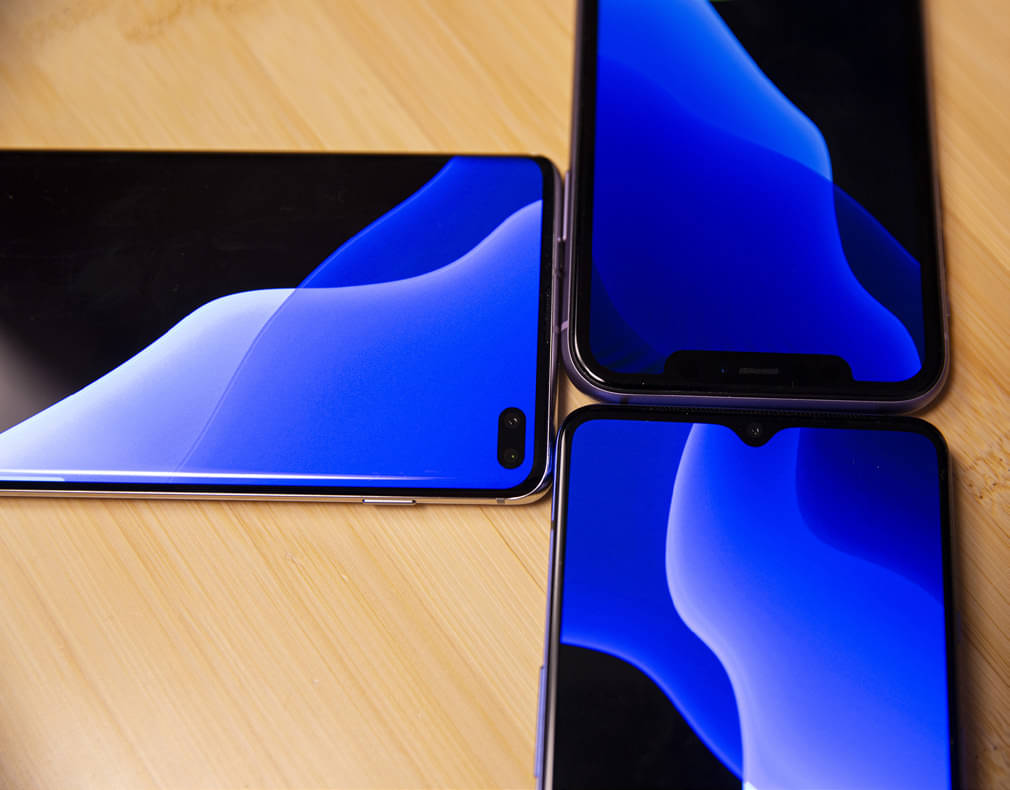 The OnePlus 7T may lack the pop-up selfie cam and edge-to-edge screen of the OnePlus 7 Pro, but its tiny “teardrop” notch, slim bezels, and thin body steal the show. Like the iPhone, the metal sides match your chosen color (blue or silver), setting off the all-black front nicely. The bezels aren’t much thicker than those on the S10+, and I prefer the flat look over the S10+’s infinity screen.

If the new trend is to spotlight the camera bump rather than try to hide it, the advantage again goes to OnePlus. The 7T’s giant circular camera array is unique, plus it’s the only phone here that can lie on a table without wobbling. I hope it remains a design element on future OnePlus phones. Winner: OnePlus 7T

With such skinny bezels on all except the Pixel 4 XL, the display commands all of your attention. All of the OLEDs here are supplied by Samsung, while the iPhone 11 uses an LG LCD. They all feature HDR10 and Dolby Vision, and are impressively calibrated out of the box. 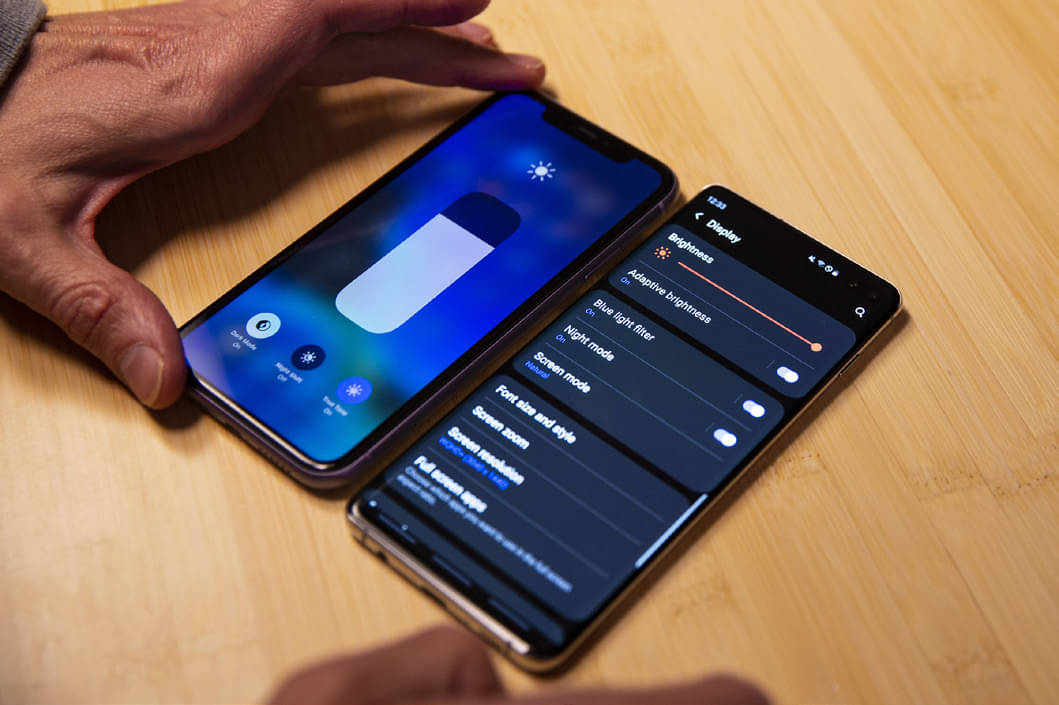 But they’re not created equal, especially in refresh rate. The standard is 60Hz, which is the default for all four phones, but the OnePlus 7T and Pixel 4 both feature 90Hz options. The extra 30 frames per second means scrolling and swiping feel faster, especially on the 7T. Google hamstrings the Pixel 4 XL somewhat by limiting this feature to screen brightnesses above 75 percent, though an upcoming software update will allegedly fix it.

Screen speed isn’t the only area where the 7T excels. The quad HD Galaxy S10+ may win for crispness and vividness, but the 7T is still bold, bright, and easy on the eyes. Like the iPhone 11’s, the OnePlus 7T’s display is something of a testament to how much you really need in a phone. It’s “only” full HD, doesn’t have curved edges, and lacks ambient and always-on options, but it still makes a strong showing. 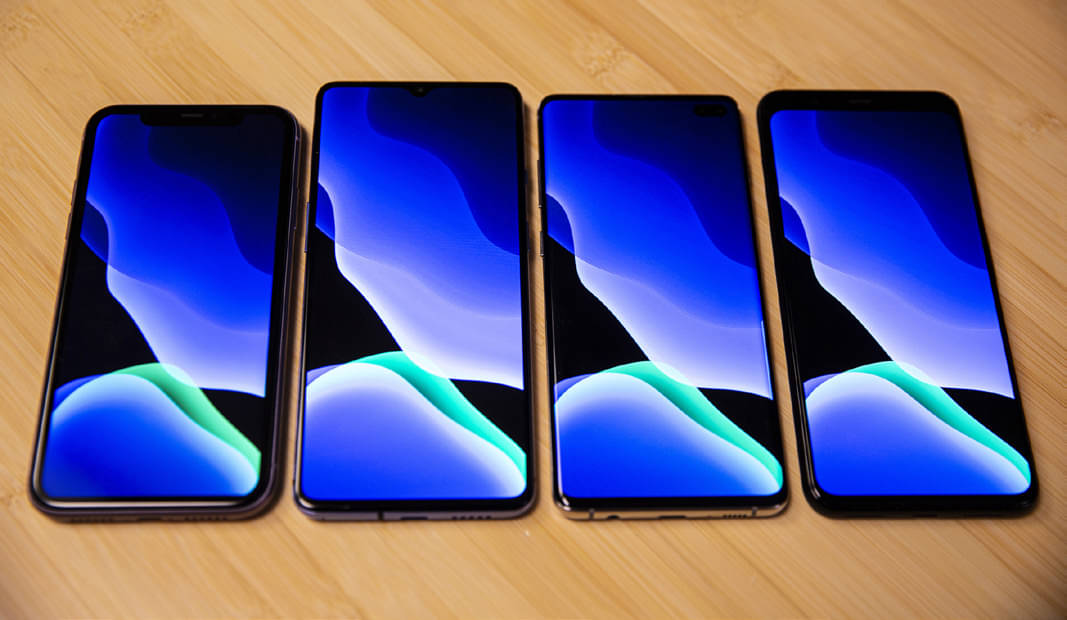 As the only LCD of the bunch—and a 720p one at that—the iPhone 11 loses when it comes to depth. The blacks of an LCD can’t match those of an OLED, which is particularly evident when switching on the new iOS dark mode.

Apple has done a fantastic job with the calibration on the iPhone 11’s display. Colors are rich and vibrant, though I would like an always-on or ambient option, especially at night when the whole display needs to light up to check the time.

When it comes to brightness, the iPhone 11 shines, though the 7T was just a little better. However, in my testing with a simple white background, the 7T was also the most inconsistent.

I’m confident in saying Google has delivered its best display in the Pixel 4 XL, but that’s mainly because the ones that came before were so disappointing. It still has Google’s trademark dullness, and an overall lack of punch when left in Natural mode. But even when switched to Boosted, the Pixel 4 XL just has a flatter feel when compared to the other phones here.

The Pixel 4 is particularly lackluster when placed next to the Galaxy S10+. But to be fair, most phone displays are. The Galaxy S10+ pretty much set or broke every display record there is. There aren’t enough adjectives or superlatives to describe just how gorgeous the S10+’s screen is. My only want is a higher refresh rate—and I have to assume that’s coming with the S11. Winner: Samsung Galaxy S10+

The real-world results don’t quite match up, however. In my testing and real-world use, the S10+ bested its competitors, but not by much, while the iPhone 11 vastly outperformed its capacity. The only one that consistently struggled to make it through a full day of use was the Pixel 4 XL. The iPhone 11 and 7T benefit from their lack of an always-on display, but some (including me) will miss that feature. 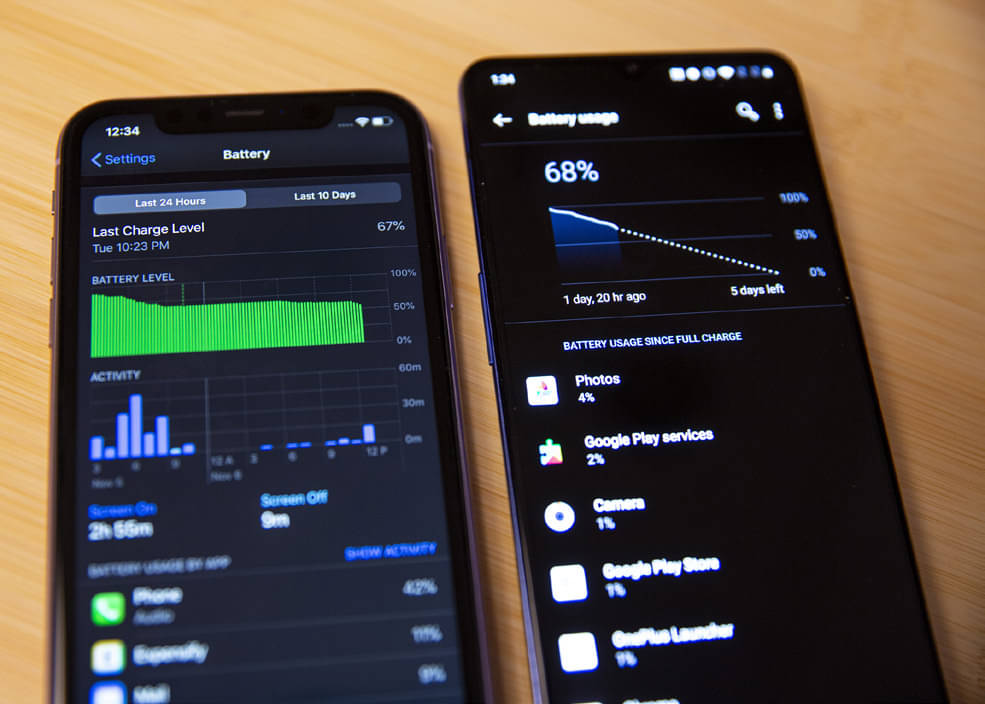