'Bhasantara' Shows Ways To Overcome The Barriers Of Communication 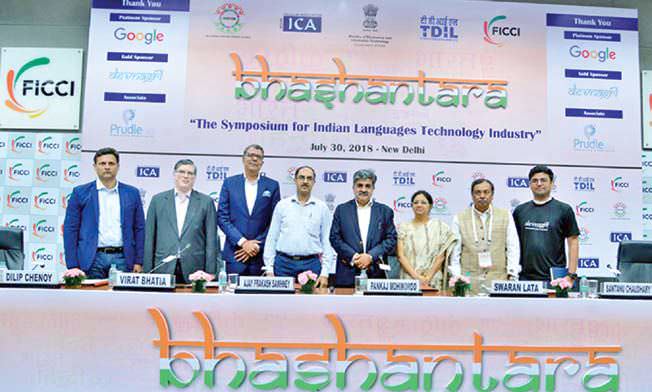 Bhashantara, a symposium on Indian languages technology industry, heralds the beginning of a momentous journey in the history of mobile handset industry in India

In order to celebrate the formal adoption of Indian language support on mobile handsets and development of appropriate ecosystems around languages, Indian Cellular Association in partnership with industry body FICCI, Ministry of Electronics and Information Technology and Technology Development for Indian Languages recently organized Bhashantara, a symposium on Indian languages technology industry in New Delhi.

Ajay Prakash Sawhney, Secretary, MeitY, who was the chief guest at the event, said that barrier-free communication is critical for the country and the goal is to have real-time translation capability in each of the Indic languages. “We all know about India Stack. We should now come up with ‘India Language Stack’, which will help in overcoming the barriers of communication,” said Sawhney. He also added that with internet access becoming affordable, demand for regional content is increasing and will continue to grow.

The MeitY Secretary also launched e-Aksharayan in 7 Indian languages. e-Aksharayan is a desktop software for converting scanned printed Indian language documents into a fully editable text format in Unicode encoding. It supports major Indian languages- Hindi, Bangla, Malayalam, Gurmukhi, Tamil, Kannada and Assamese. He also released Mobile Testing Data in all 22 Indian languages towards IS16333 - part 3 compliance. This data is useful in testing the display as well as inputting in mobile handsets IS standard 16333 (Part 3), which defines the requirements for mobile handset for inputting of text in English, Hindi and at least one additional Indian official language along with facility of message readability in the phones for all 22 Indian official languages.