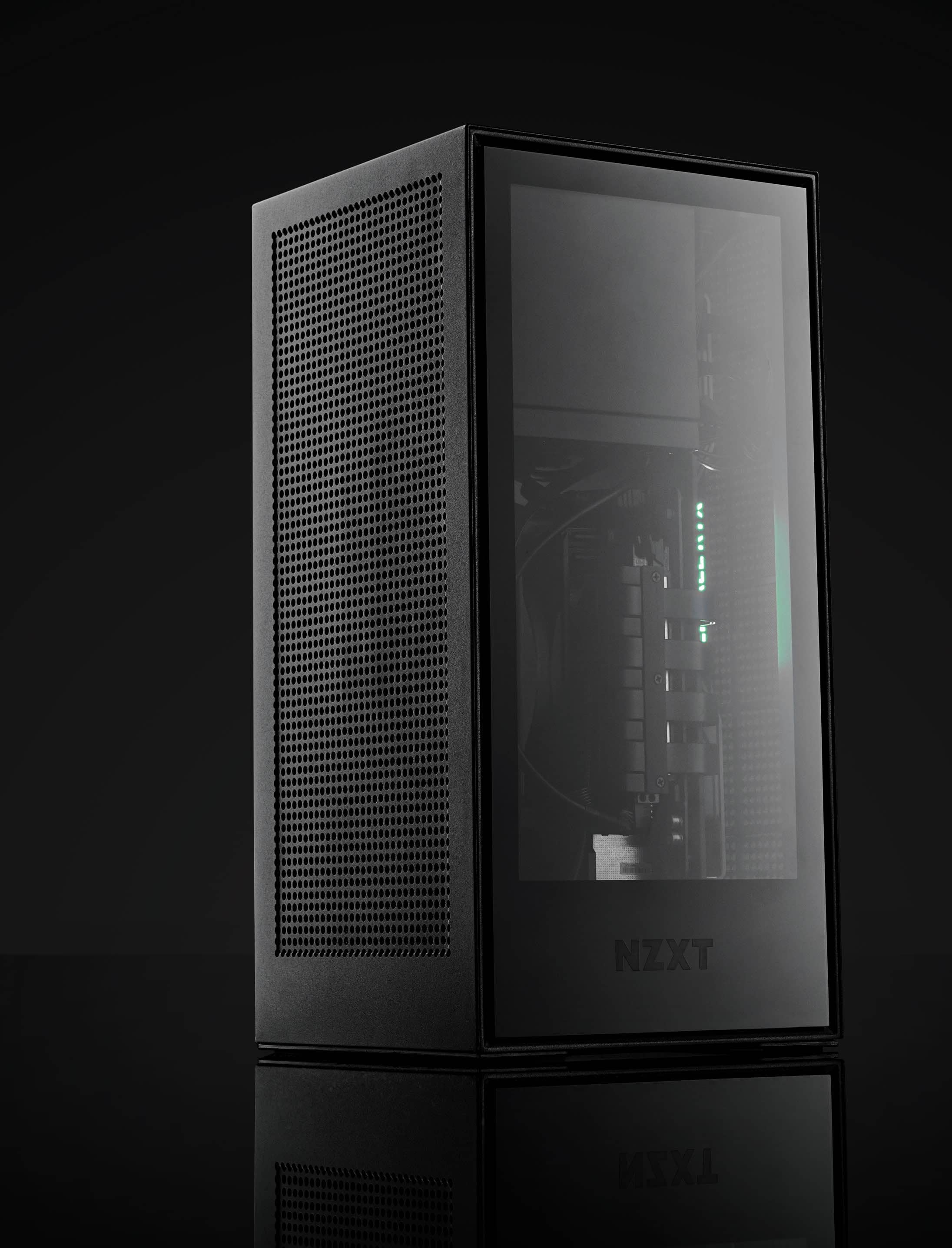 Build yourself a desk-friendly videographer’s machine

High-end videography work (whether that’s live streaming, post-production editing, or something else entirely) often demands a powerful PC. 4K video editing, exporting, and encoding are all resource-intensive tasks, and trying to do them with a sub-par or ageing machine is sure to lead to lengthy processing times and general frustration.

Such powerhouse machines are also often pretty chunky. It’s part of the reason that Apple’s desktop products have become successful within the creative industry; the all-in-one form factor of Macs is a great space-saver, tucking a purpose-built compact machine away behind a large monitor. But for those who prefer PCs, a system that can comfortably handle demanding video tasks is often going to be large, heavy, and potentially quite loud. 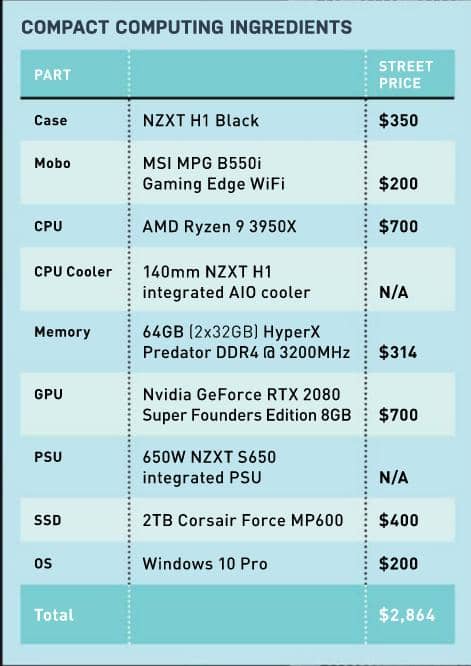 Such machines either take up a significant amount of available desk space or need to be placed underneath the desk itself, making cabling and access a hassle as well as potentially worsening airflow, since the system is closer to the floor. Fortunately, your friendly neighborhood computer magazine is here to show you how to make a videography machine that has both a compact desktop footprint and a ton of powerhouse components.

Whether you would choose PC over Mac for software and OS reasons or just the superior customizability of PC hardware, there are a few benefits to consider here. Windows is obviously one of them; the world’s most widely used operating system is ideal when it comes to compatibility and familiarity. We’re deviating from the norm, though. You’ll notice in our list of ingredients that we’ve opted for Windows 10 Pro, the more powerful version of Microsoft’s flagship OS. It’s also more expensive than Windows 10 Home, so if you don’t need the Pro upgrade, consider it merely a suggestion.

Pro’s main benefits are improved security (with BitLocker encryption) and a suite of various enterprise features; it’s up to you to decide whether you actually need that in your professional capacity. This isn’t a cheap system, so if you want to save some cash you can buy Home.

Now, without further ado, let’s take a look at the physical parts we’re using to build this system. –CHRISTIAN GUYTON 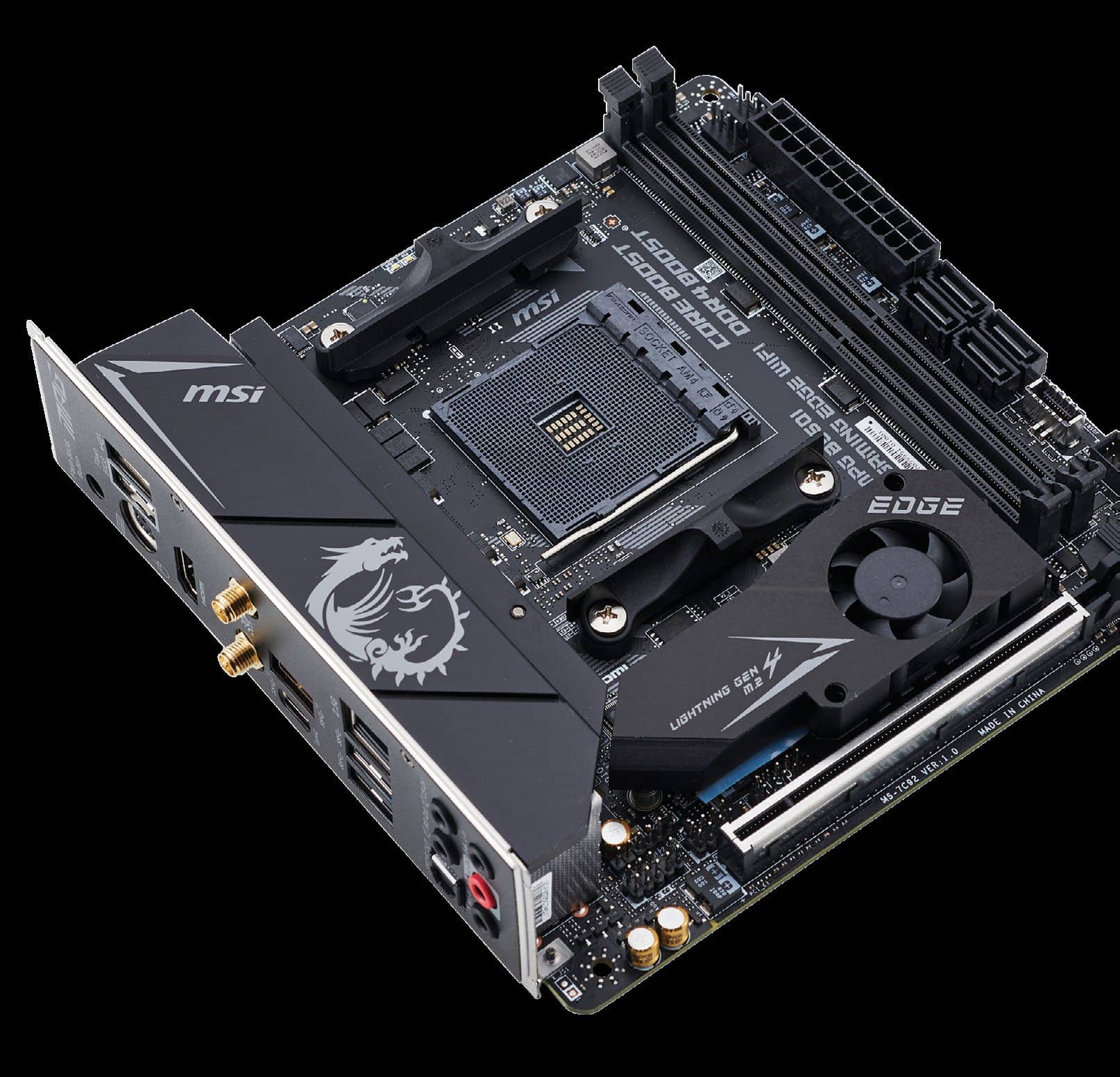 The new B550 chipset is changing the game when it comes to AMD machines. Previously, if you wanted to take advantage of the blazing fast PCIe 4.0 SSDs, you needed an X570 motherboard, which was undeniably expensive— especially if you were looking to build a more affordable system with a cheaper Ryzen 3000 processor. The B550 line is a solid upgrade to the similarly budget-conscious B450 chipset, and this MSI board packs all the features we’ll need into a compact ITX form factor. Shifting down to an ITX motherboard doesn’t have to come with a noticeable drop in performance; we’ve picked the best components to work with this mobo. 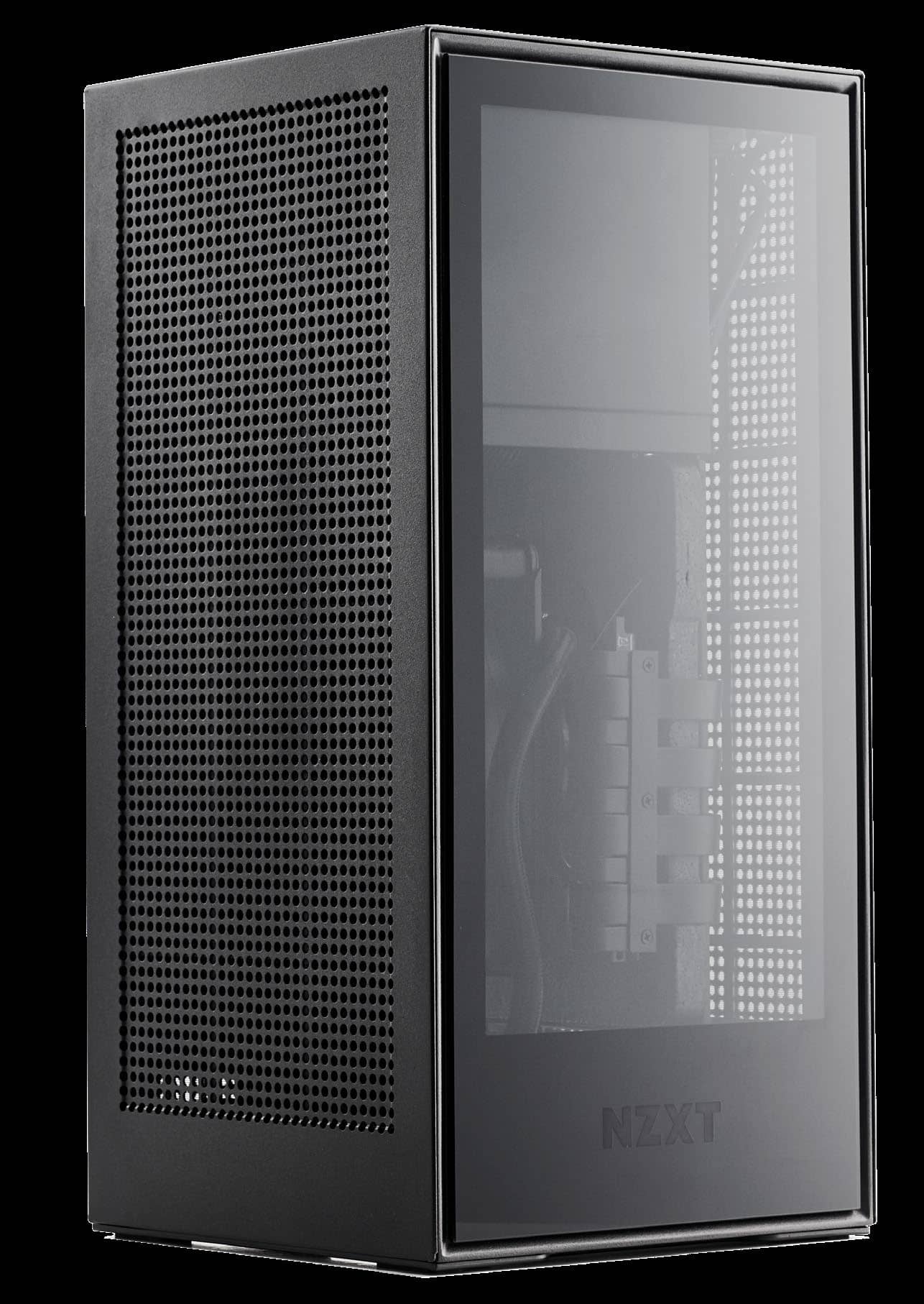 That’s a lot of money for a case! Don’t worry, though, it’s justified. The NZXT H1 is the entire basis for this build: A supercompact ITX tower with an incredibly small footprint. How does it achieve such slenderness? Integrated components, that’s how. Part of that $350 price tag is allocated to the 80+ Gold-rated NZXT S650 power supply, a small but mighty PSU mounted at the top of the case to save space. An AIO cooling solution is also included, routing heat away from the motherboard to a 140mm radiator and single fan. Heat buildup shouldn’t be a problem here, though; the H1 has three sides with a perforated design that ensures good airflow at all times. There’s even a PCIe riser strip for you to vertically mount your PSU, guaranteeing optimized use of the available space. Oh, and the H1 looks awesome and feels robust, with a frame of solid steel and a tall tempered-glass window. 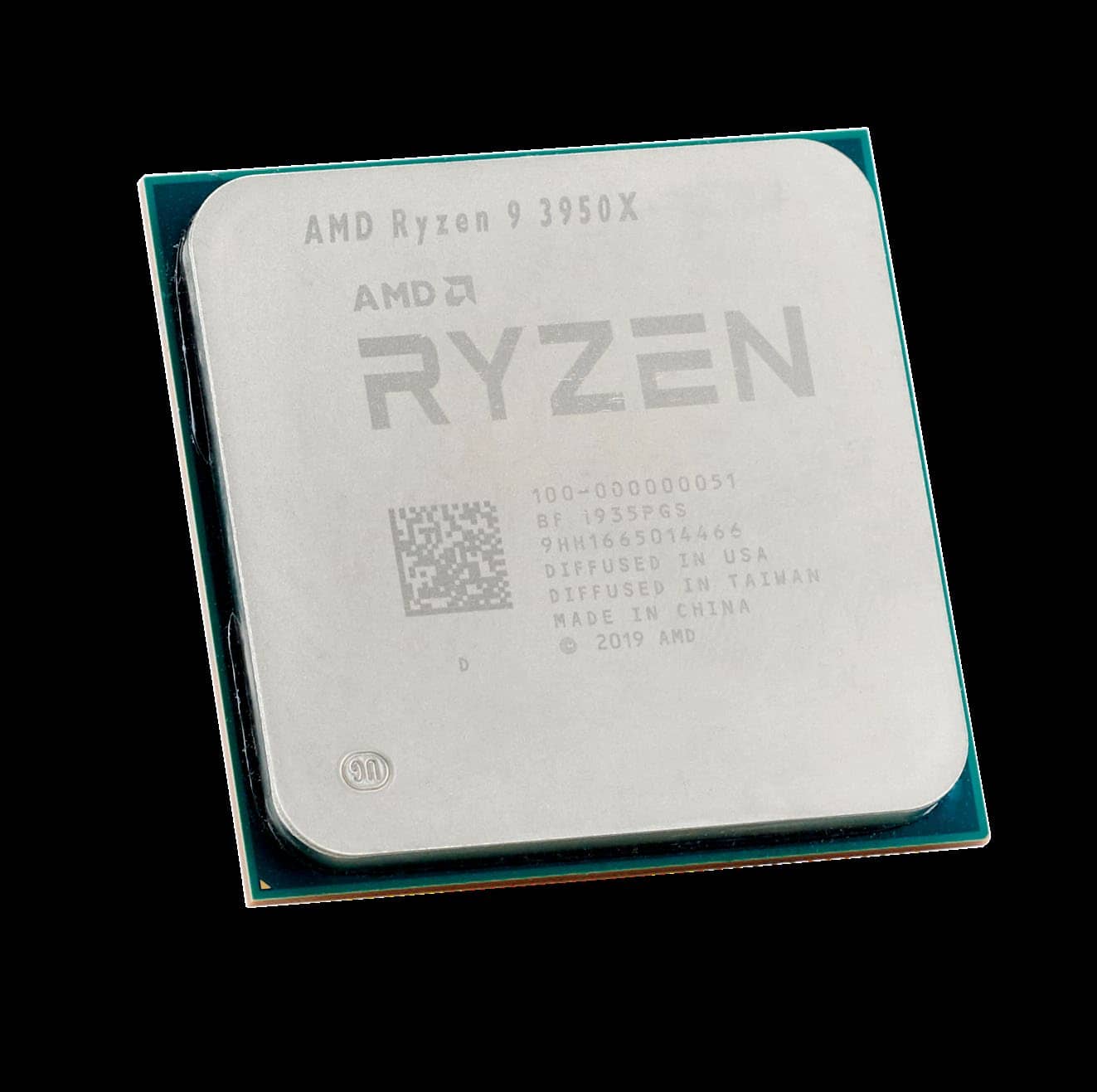 The core of this machine is AMD’s most powerful Ryzen chip, the Ryzen 9 3950X. The arrival of the 4th generation of desktop Ryzen chips is still a matter of debate, with leaks and rumors swirling, and the recent announcement of powered-up “XT” variants of the 3600X, the 3800X, and the 3900X. For now, though, this 16-core beast remains at the top of the table. A whopping 4.7GHz max boost and a tonne of cache memory makes this a content-creation powerhouse as well as a top-notch gaming CPU, and AMD’s SMT technology means we’ve got 32 threads to play with as well. Combined with a powerful GPU, this chip should blast through most video-editing tasks and run cool thanks to a 105W TDP and its 7nm architecture. 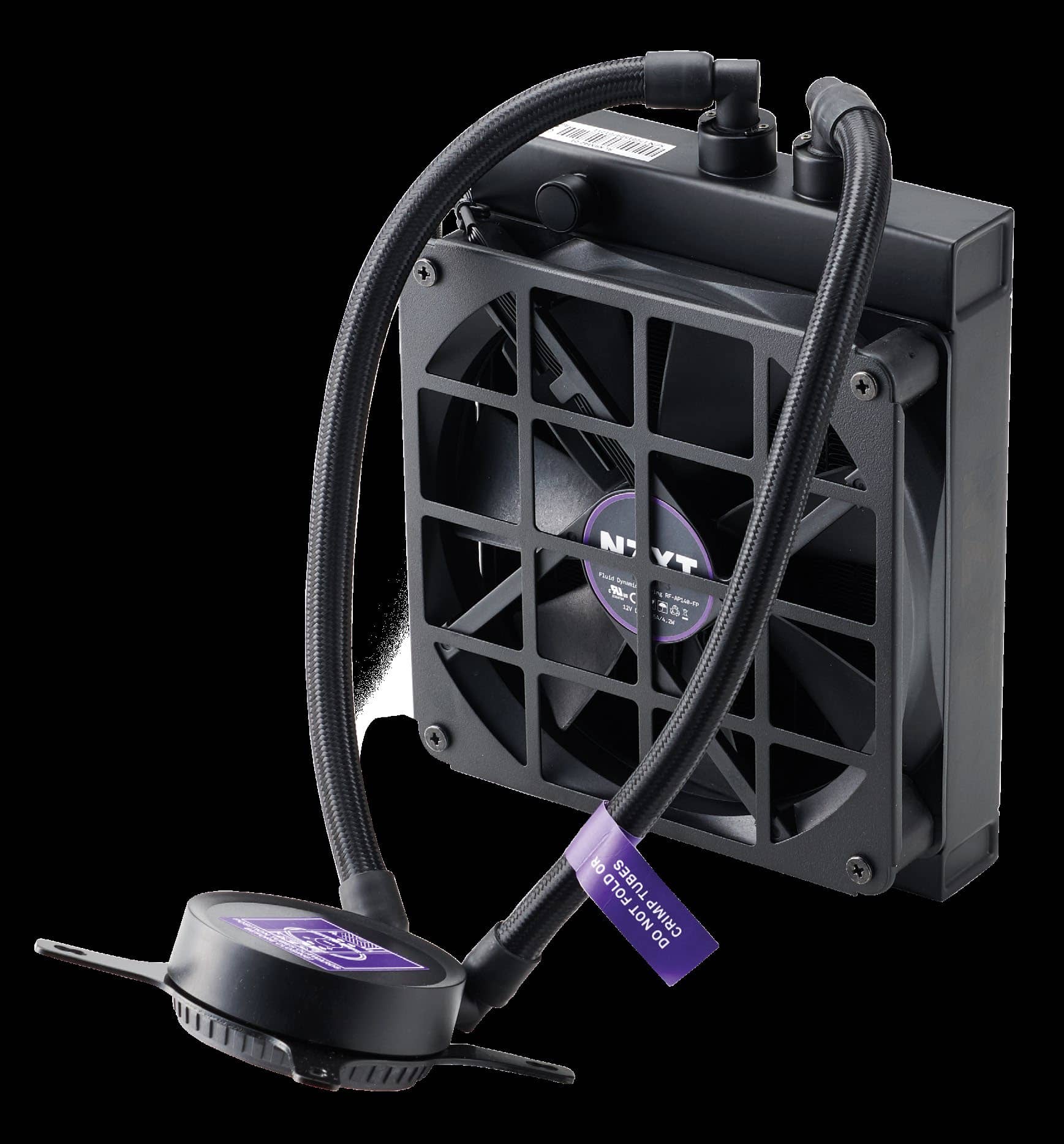 As we mentioned earlier, the H1 case from NZXT comes with a CPU cooler and power supply built into its chassis. These are both removable, but that’s a challenging process, and it’s also unlikely you’ll want to use anything else; this is a high-quality AIO cooler with a 140mm NZXT fan and tubing that is exactly the right length for zero in-case slack. The single radiator is set up in conjunction with other components to promote a specific dual-chamber airflow setup, where cool air is drawn in from both sides and expelled through the perforated rear panel. It’s an elegant solution for compact cooling, and the pump plate is equipped with a bracket that makes it compatible with both AMD and Intel ITX motherboards. 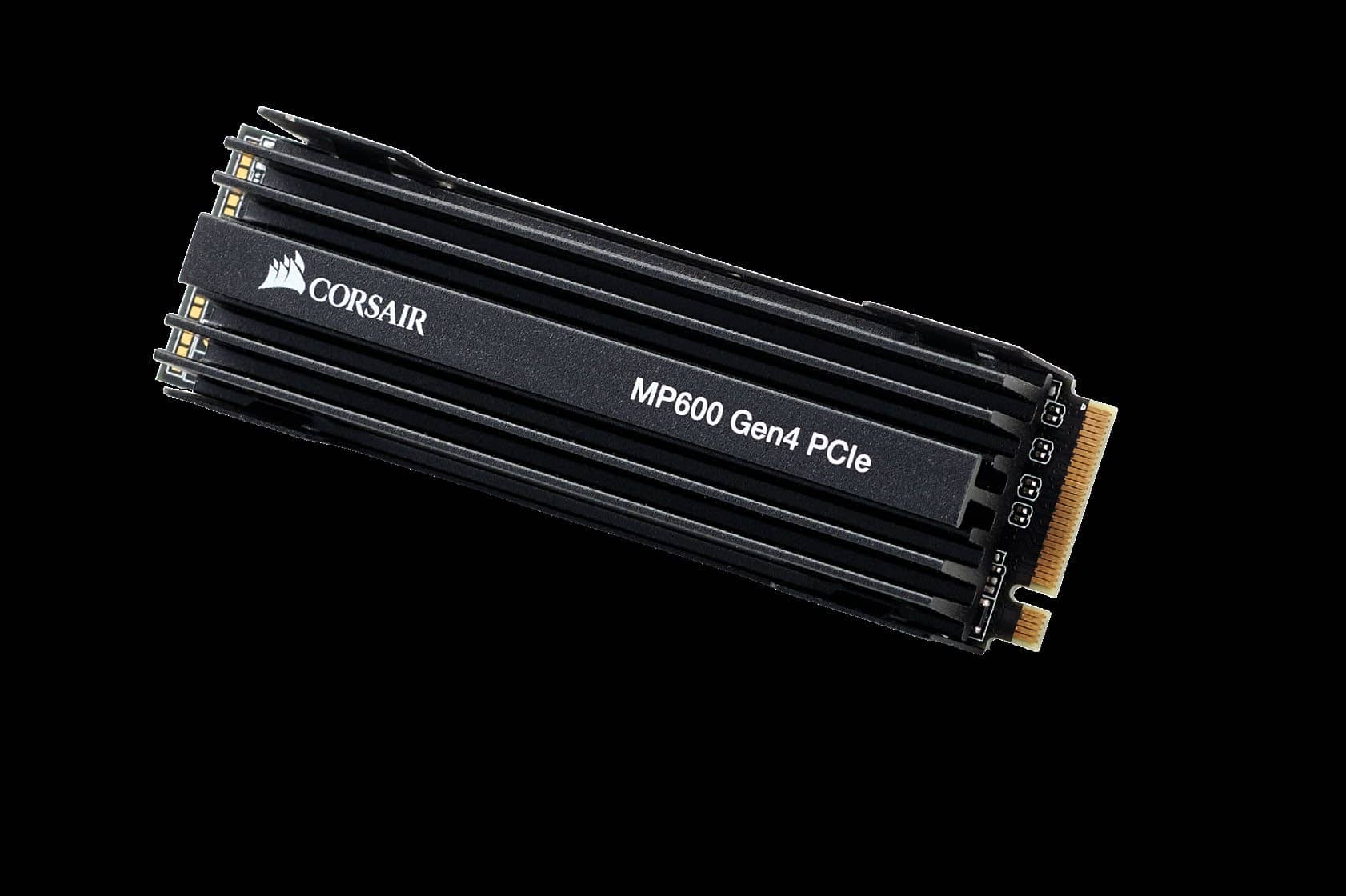 Okay, we might’ve gone a bit overboard spending money on this build. But the Force MP600 is still our favorite PCIe 4.0 drive: reliable, stupidly fast, and the attached heat sink is nice and easy to remove. When connected to a supported motherboard and CPU, this M.2 SSD reads data at almost the holy 5GB/s, and it’s actually one of the more affordable 2TB drives with PCIe 4.0 compatibility. The M.2 format means there’s no cables to worry about either, which is a plus in such a cramped build. Corsair guarantees that the MP600 will write up to 3,600TB of data before you ever have issues with reliability, so it’s simply the best 4th-gen M.2 SSD around—at least, until the looming titan that is Samsung releases its own competition… 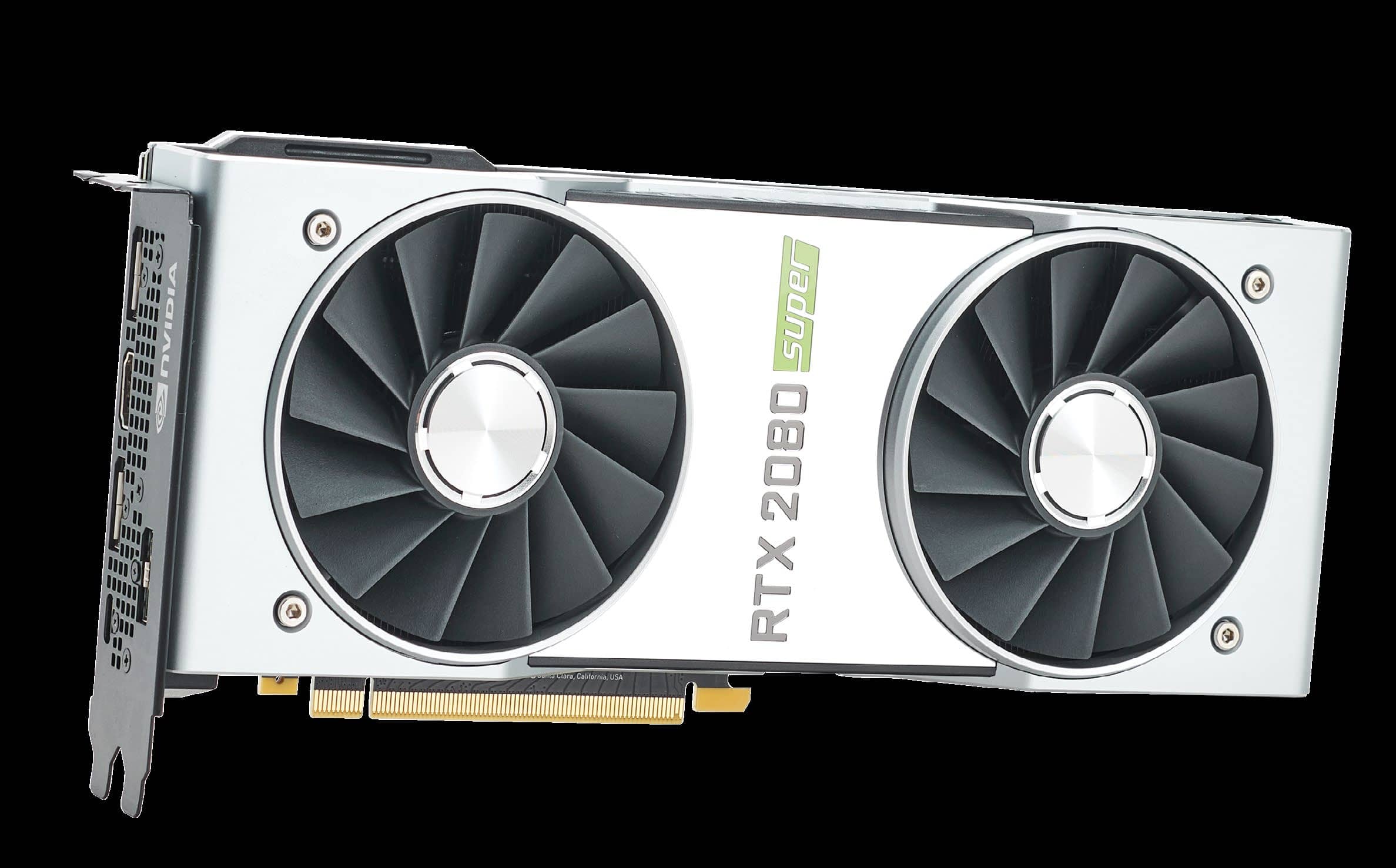 The professional ethos certainly applies to our GPU, the RTX 2080 Super FE. Nvidia’s stripped-back aesthetic looks great, particularly the ultra-shiny mirrored centerpiece. The most RGB you’ll get here is the GeForce RTX text along the side of the card, which lights up a bright green. Of course, the Founders Edition model of this top-notch GPU is something of a rare find at this point, so you will probably have to opt for a third-party manufacturer version. That’s fine: Factory overclocked cards can perform better than FE models, and might come with software or aesthetic choices that you prefer. Be wary, though, as the H1 has very little room to mount a graphics card. Triple-fan cards are obviously not an option, but even some twin-fan GPUs will be too bulky for this case. Do your research first. 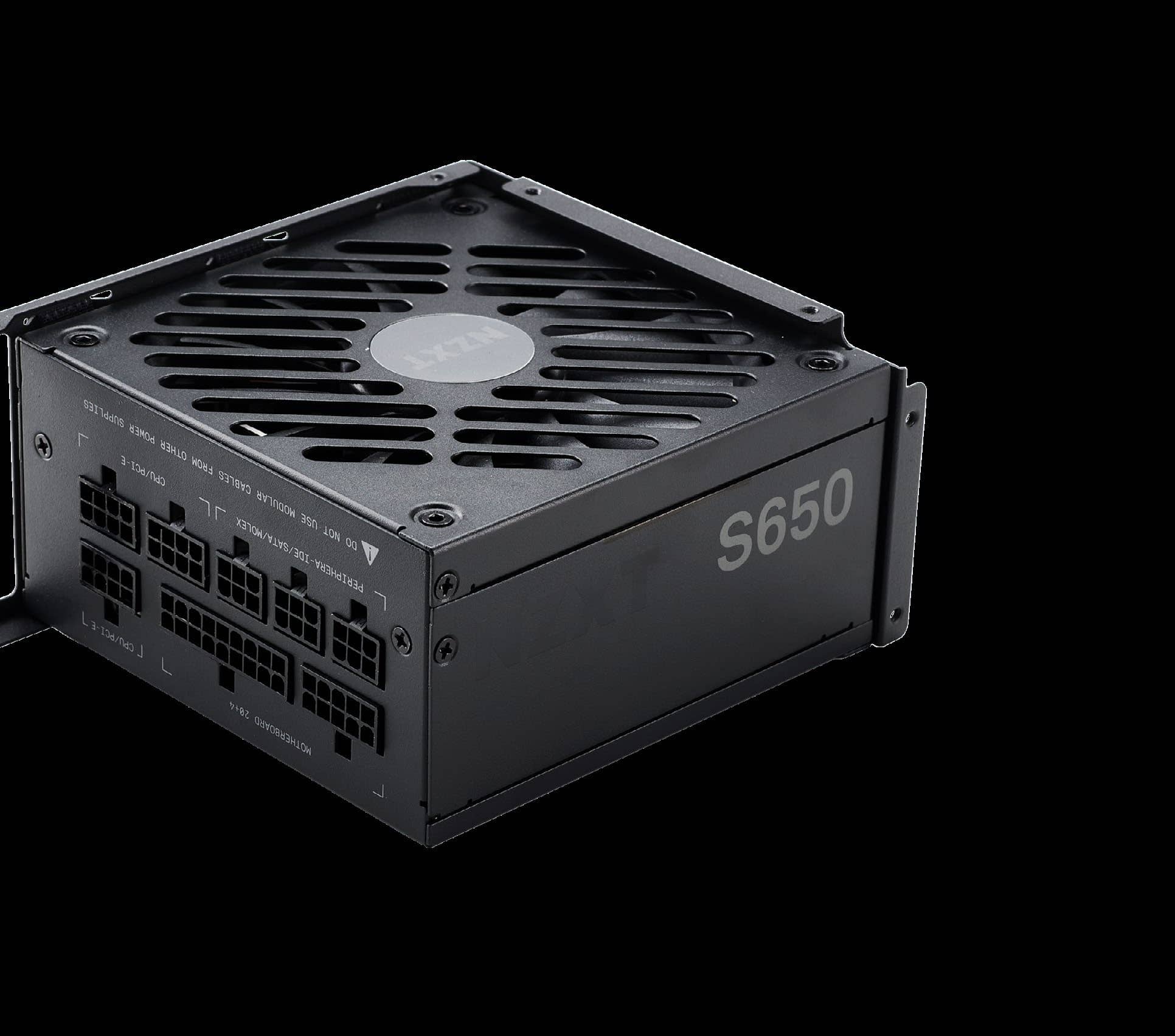 A simple but high-quality component, the S650 is a conventional SFX-L power supply, with a fully modular design and pre-routed cables inside the NZXT H1 case for minimal clutter. If you were to build an integrated-graphics system inside this case, you could strip away even more of that cabling. The S650 is (as its name implies) a 650-watt power brick, which should be more than capable of supporting our system and leaves some headroom for upgrading in the future too, in case you decide to bump up the GPU or add extra storage. Interestingly, even though the H1 case and cooler come with a three year warranty, the S650 retains NZXT’s standard warranty for power supplies: A whopping 10 years of coverage. 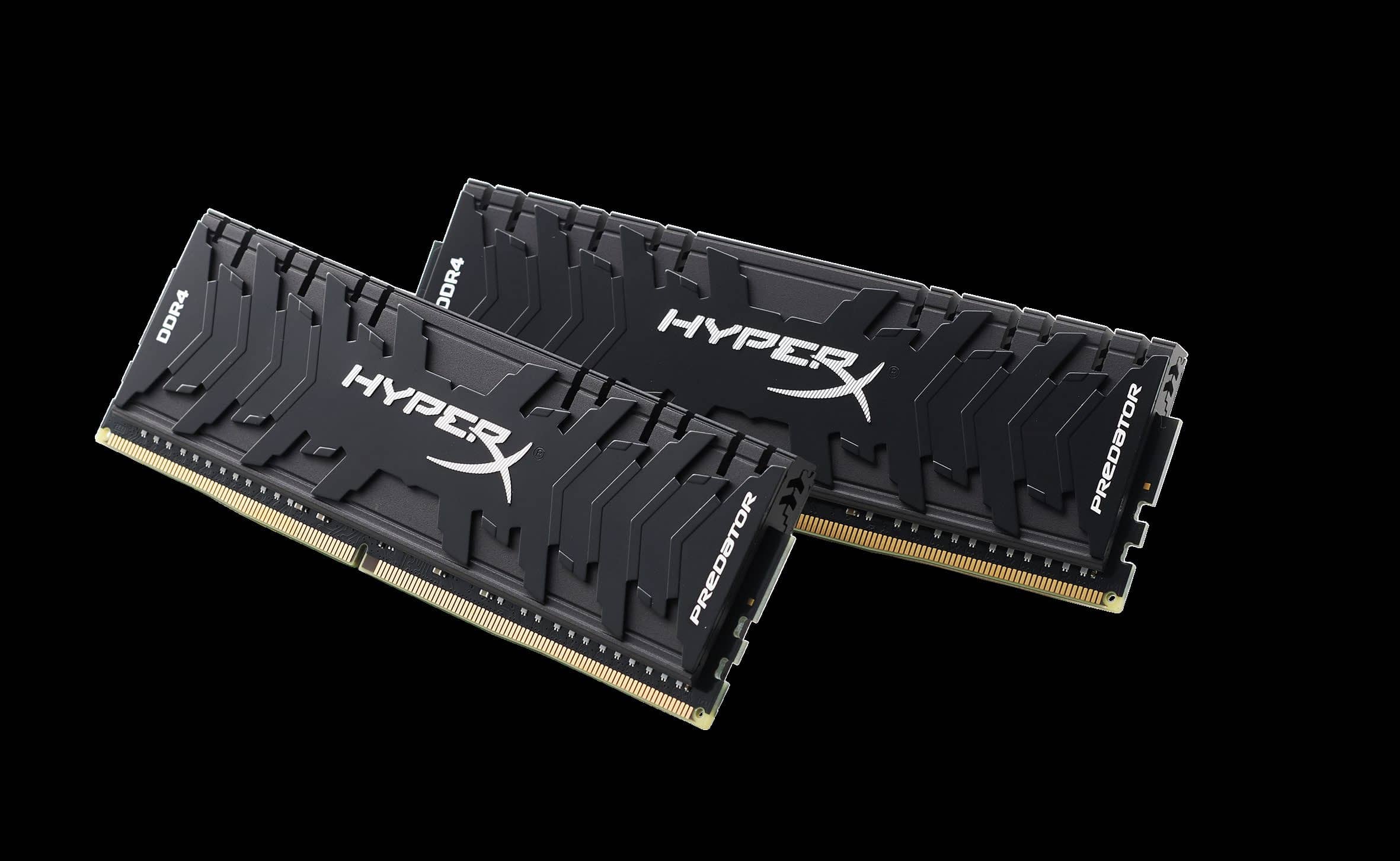