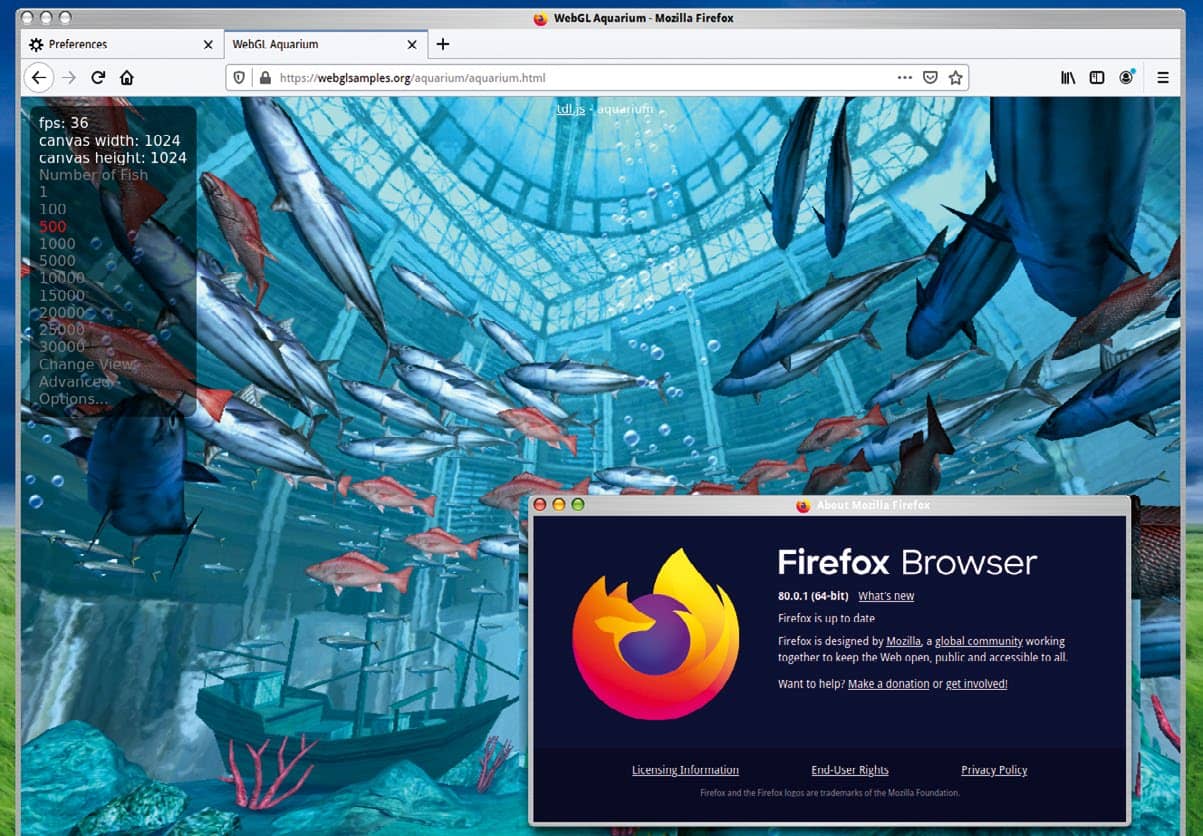 Mozilla hasn’t published any monthly updates to Firefox for some time now. The regularity of such updates resulted in a laissez-faire attitude towards new features – a far cry from the early days of Firefox. However, this time the latest version feels special because among a regular collection of minor improvements there’s one that’s long been anticipated: GPU acceleration for X11. Not only is this feature specific to Linux workstations, but it’s also narrow-specific – whether you run Wayland or Xorg as a daily driver.

GPU acceleration was first introduced earlier this year in May for Firefox 76, and until now it remained a Wayland-only feature. Notebook users, in particular, will benefit from such acceleration – for instance, watching YouTube videos makes a big difference depending on whether your web browser is capable of taking advantage of the GPU or not.

High CPU usage, noisy fans, drained battery, and other unpalatable outcomes can now be avoided for both Wayland and Xorg desktop sessions. Head over to the ‘about:config’ page, search for ‘vaapi’ and enable both settings. From this point onwards there’ll be a noticeable difference in Firefox’s performance once you visit a web page where graphics are heavily used: not just video playback, but WebGL elements and advanced browser games should now result in reduced CPU usage. The performance improvement made possible thanks to VAAPI acceleration can be clearly seen during everyday browsing activity, especially if you previously had issues with Firefox running slowly. For example, the GPU-accelerated Firefox 80 finally plays ultra high-resolution movies without quirks, even when run inside a virtual machine (provided the guest supports OpenGL acceleration in general).

Apart of that bold feature, the latest Firefox release also sports an add-on block list, which is designed to protect users from unsavory and privacy-invading add-ons. Hopefully, that Mozilla-maintained list will be sensible and fair in its choices. 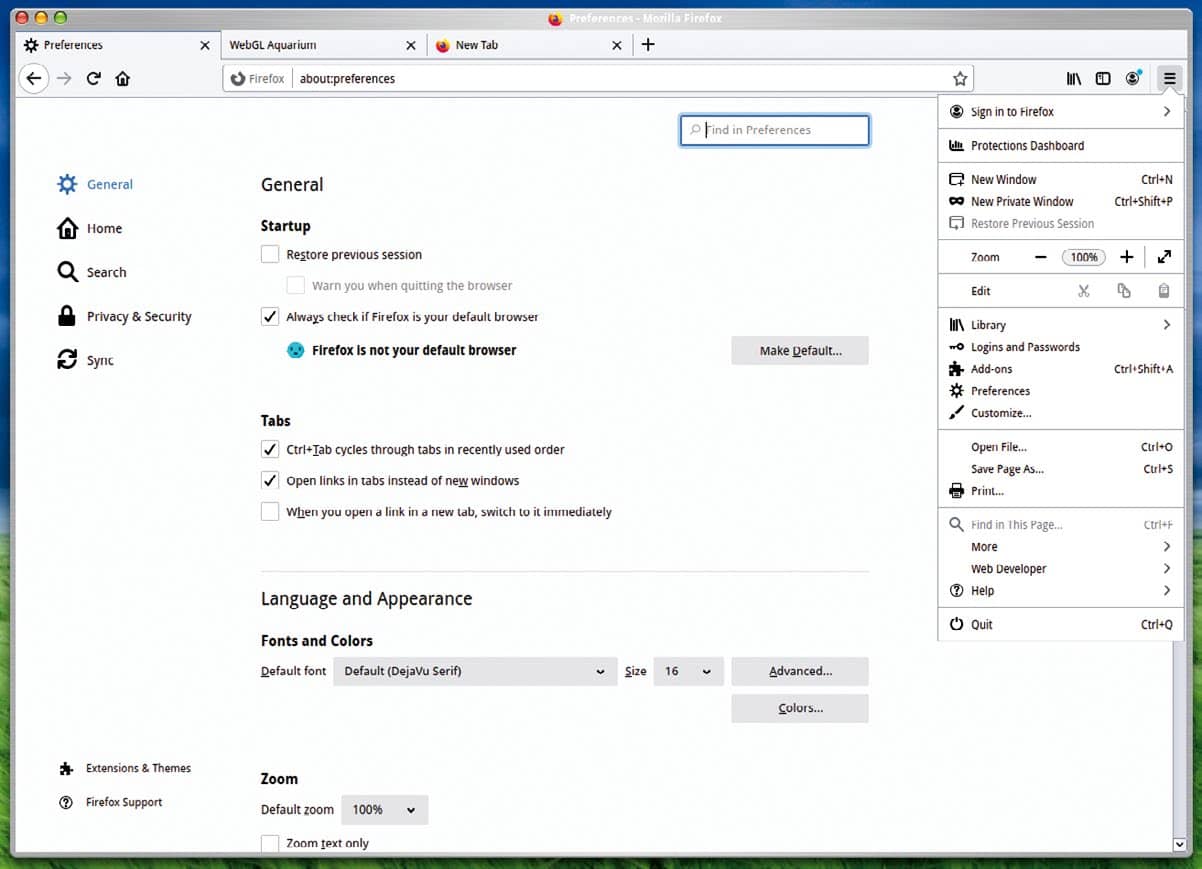 1 Navigation Barthe upper toolbar enables you to switch back and forth between pages, and also keep an eye on open tabs.

2 Make some adjustments to ‘about: preferences’ and customize Firefox. You can use the search field to find settings faster.

5 Firefox, your way! This small link in the bottom-left corner takes you to the built-in store, which features add-ons, themes and extensions. 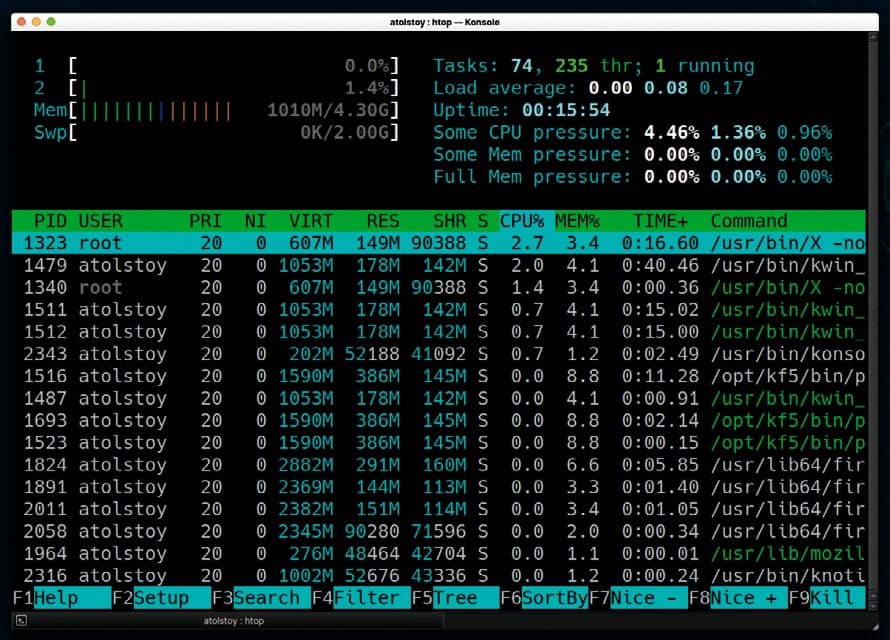 There are several reasons for using Htop to keep an eye on your system resources. The most obvious one is that Htop is an advanced replacement for top, the classic Unix-era utility that’s been around for decades. Htop is colorful, which is an immense benefit over the top when examining production systems that feature a range of running services. It’s also ideal for any system these days, including the average Linux desktops because some programs tend to spawn multiple granular processes (Firefox or Chrome, say).

After years of little if any activity behind the scenes, the Htop project was taken on by the new team, and recently Htop 3.0 was released together with a gorgeous new website with tech stylings. The tool was updated to support pressure stall information (PSI) meters, display more CPU states and frequency bars, and also features a ZFS ARC (Adaptive Replacement Cache) meter.

PSI is a great way to examine resource shortages as they develop, including CPU, memory, and IO. Your Linux kernel should support those meters just fine, but you may need to add psi=1 to the list of kernel boot options. As for ZFS, if you have to deal with it (for example, Ubuntu can be installed on a ZFS partition), then adding the ZFS ARC meter to Htop can help monitor cache performance and detect disk reads slowdowns.

Most people are happy with the way Htop looks by default, but it’s also easy to customize the tool’s appearance and layout. Use the key hints along the bottom of the window to navigate and filter the list of processes, and also to access the settings (F2). Htop sports an intuitive tree-like structure for settings and enables you to quickly add, remove or rearrange items, and change some meters (for example, replace the CPU bar with a CPU graph). Remember to press F10 to save your changes. Htop stores the configuration at ~/.config/htop/htoprc, although it’s not advisable to edit the file manually. 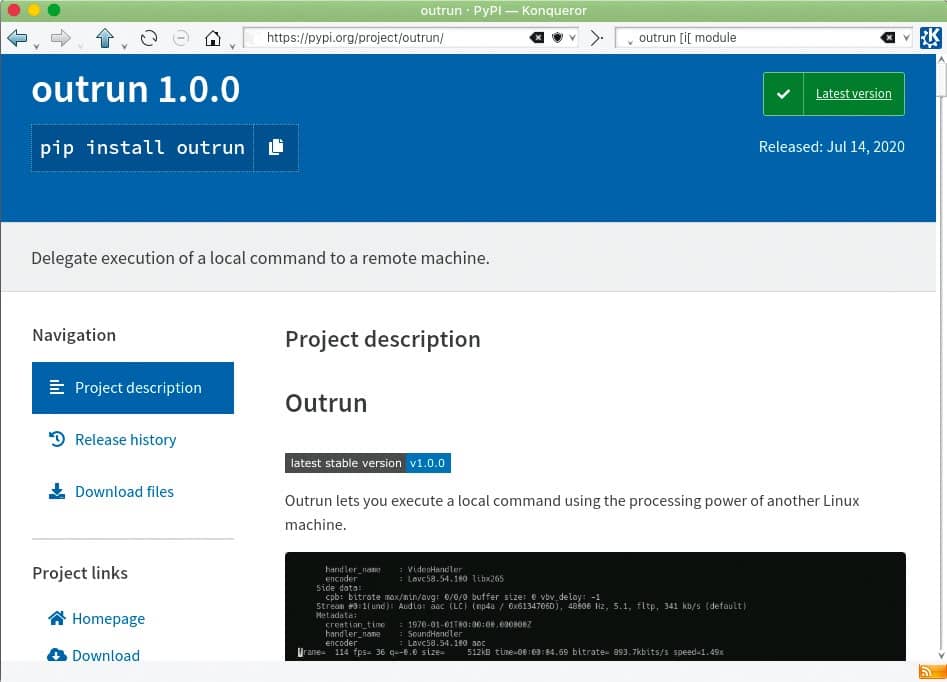 Outrun is a powerful system tool that can do cool things inside a LAN of Linux machines. It’s designed to offload CPU calculations to a remote host. It uses chroot for that and therefore requires the root access to the target host. Say that you want to re-encode a movie using Ffmpeg. Your usual machine does it slowly, but there’s a more powerful machine that you can access for this task. If you can ping it and access over SSH, then you can run your Ffmpeg command wrapped by Outrun with the following:

$ outrun user@host ffmpeg -i input.mp4 -vcodec libx265 -crf 28 output.mp4 No prerequisites on the target host are needed –Ffmpeg doesn’t even need to be installed on it! Outrun only uses the remote host’s CPU, whereas the input/ output files remain on the local host. During our explorations of Outrun we noticed that the first run of anything with it causes an initial delay. This is Outrun copying executables and its dependencies to the target host. Even if the latter already has the required software (like Ffmpeg in our example), Outrun will check versions between the two hosts, and in case of a mismatch it’ll copy the local version to the remote host. Of course, this introduces some limitations to using Outrun and means that not every Unix-like system will work with it. However, many different Linux distributions will, and our tests showed that it’s worth putting in the initial effort.

Ensure both source and target hosts have Python 3.7 or newer installed, then run this code on each machine: