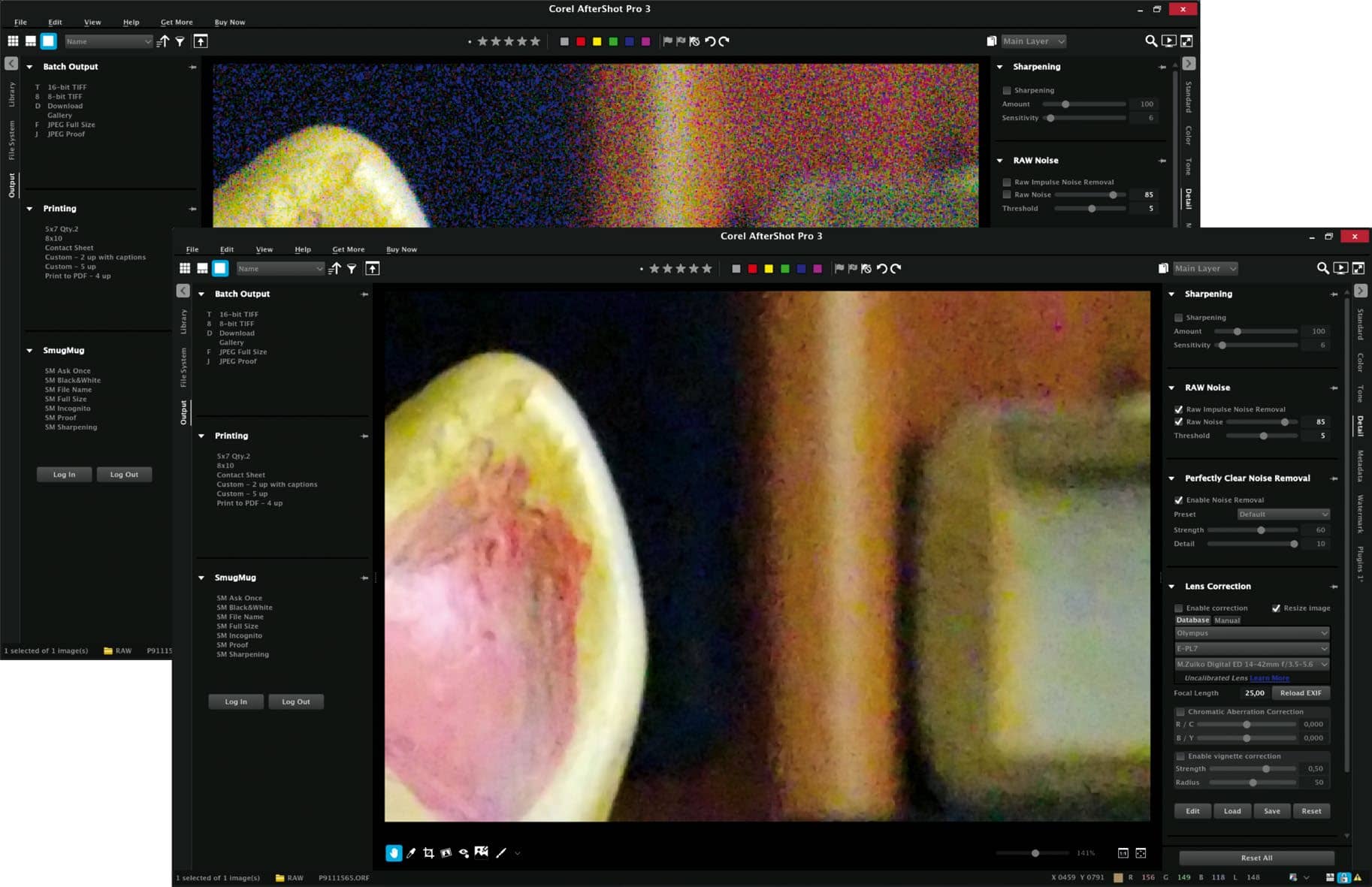 In the first of a two-part series, Alexander Tolstoy shows how to edit RAW files as he explores open source alternatives to Adobe Lightroom.

Almost everyone is a photographer these days thanks to smartphones and affordable D-SLR cameras. Taking photos can be fun, but it can become so much more – whatever equipment you might own. From starting out as a novice photographer, you can become an enthusiastic hobbyist as your skills improve. You can even turn pro and make money from something that was once just a means of capturing a moment in time.

Somewhere along the way, you’ll come across the phrase “shooting in RAW”. In this tutorial, the first part of a two-part series, we’ll explain what a RAW file is, how it’s an improvement on the JPEG format, and how you can use open-source software to work with RAW files. Part two will cover advanced RAW editing techniques.

What is the RAW format?

When we take a photograph that’s saved as a JPEG, we often don’t realise that the camera’s firmware carries out a lot of enhancement steps automatically: color balancing, de-noising, and so on. In contrast, a RAW file is a minimally processed set of data taken directly from the camera’s image sensor. RAW files contain more color data and therefore can provide a wider dynamic range and gamut, but they’re usually not yet ready for printing or sharing.

The cornerstone of RAW processing is the assumption that a decent photo-editing program on a powerful PC can do a better job of improving the image than a camera’s basic firmware that’s locked within a limited performance range, dictated by the camera’s hardware. Thus the skill in editing RAW files is to manage the RAW-to-JPEG conversion process manually so that you outperform the camera’s own algorithms.

Modern cameras are excellent at auto-processing an image sensor’s data if the photo is taken under ideal lighting conditions (on a bright day, say). However, we might want to fix several trendy effects created by smartphones that prevent RAW images from being trueto-life, such as the ‘beautifying’ smoothing effect (which removes facial skin details) and over-sharpening (the result of the inaccurate belief that the sharper an image is, the better). 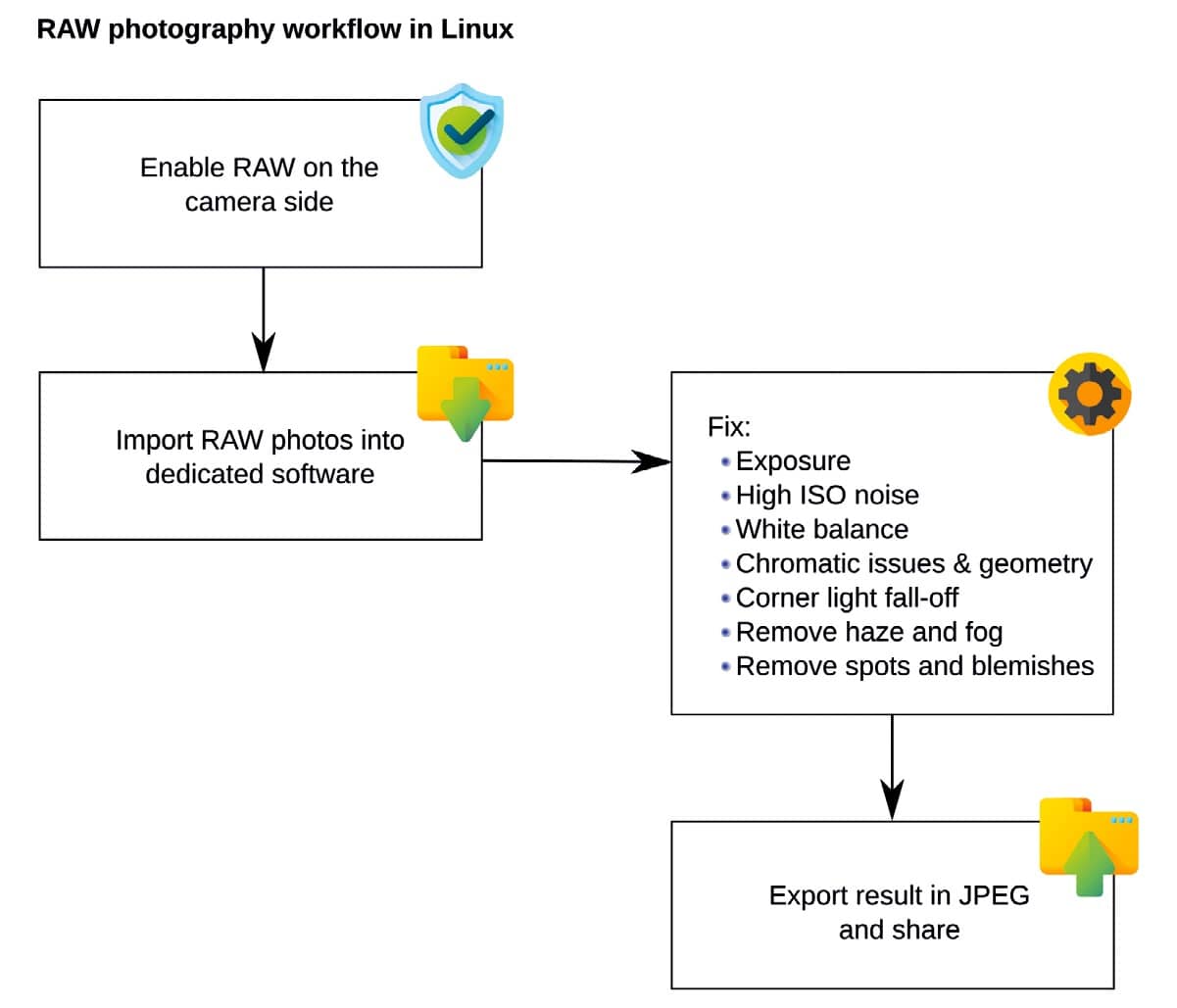 For D-SLR cameras, it’s advisable to capture RAW files when there’s no way to avoid less-than-ideal shooting conditions. In this first part of our tutorial we’ll handle the following problems:

So, without further ado, let’s get started!

All of these problems can be fixed or at least compensated for using dedicated RAW-editing software, assuming you’ve activated the RAW capability on your camera beforehand (see the workflow scheme, overleaf). Processing RAW files in Linux involves importing them into an editing application, and therefore your chosen program has to support RAW via some sort of shared library. Most Linux software relies on David Coffin’s RAW conversion utility (dcraw) or its offshoots, such as LibRaw and RawSpeed.

For example, Krita and digiKam use LibRaw, whereas UFRaw and LightZone use dcraw as a back-end. RawTherapee uses its own fork of dcraw with various in-house enhancements for select camera formats. Darktable used to rely on dcraw, but moved to RawSpeed some time ago. Finally, the proprietary RAW converter that’s built into Aftershot Pro isn’t based on anything mentioned here and has a limited list of supported cameras, but it works amazingly fast. It’s clear that the end-user needs to consider different RAW importing and conversion times, what cameras are supported, and their profiles, and so on. To a certain extent, the right RAW editor is a matter of trial and error.

Importing RAW files into an editor involves adjusting some settings: for example, choosing what to do with white balance, exposure, toning, noise removal, lens correction, and so on. Leaving out this step results in a pale, noisy image with low contrast and lots of colour issues. However, if we apply those settings wisely, the resulting image can be smoother and more vibrant than if we had shot it in JPEG using the camera’s auto mode.