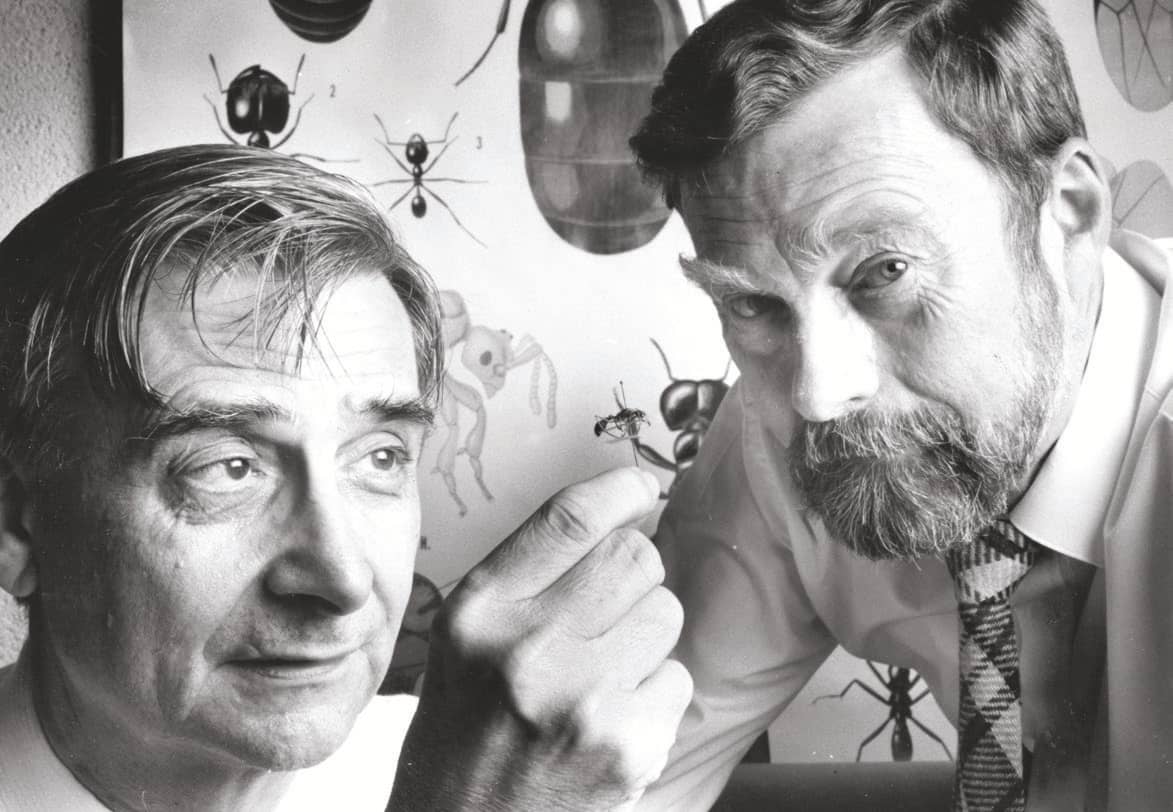 A 6-foot-tall, bespectacled professor got down on his hands and knees and crawled along the ground. He had an aspirator in his mouth, sucking up Pheidole workers like an anteater.

My friend and colleague Ed Wilson was on a mission. That night, he needed Pheidole soldiers for his taxonomic work, and he wasn’t having much luck finding them. After spending two weeks or so in the La Selva rainforest of Costa Rica, we had returned to the city of San José. It was the evening before our departure and return to Boston. Ed invited me to a restaurant located behind a little city park close to our hotel.

It was at the entrance to the park that he spotted the trail of the Pheidole ant colony. But all that he seemed to be capturing was workers, not soldiers. So he continued to crawl along the trail all the way to the nest entrance. There, to the absolute bewilderment of park visitors, he approached (quite obliviously) a young couple embracing behind a bush where the Pheidole nest entrance was located.

Alas, the behavior of this fanatic myrmecologist was so suspicious that the police appeared on the scene to inquire about his activities. Needless to say, we never made it to the little restaurant that he had recommended to me with mouthwatering superlatives. But that evening Ed discovered six new Pheidole species in the San José city park.

I had first met Ed Wilson in 1969. His work on chemical communication in animals, in particular in social insects, had influenced a whole generation of young scientists who had explored a completely new area in behavioral physiology. I was one of them.

Later in 1973, when I joined the biology faculty at Harvard University, I had the great pleasure of sharing with Ed the fourth floor of the Museum of Comparative Zoology Laboratories there. During numerous lunch meetings over 17 years, we discussed new ideas, controversies, and resolutions, and sometimes I played the devil’s advocate when Ed tried out a new hypothesis on me.

Although we had our separate research groups and programs, on many occasions we joined our talents and enthusiasm for ants to form a two-person team. Our collaboration resulted in the publication of The Ants, a book about one of the largest and most diverse groups of animals on the planet. To our utter surprise, it became the first scientific book ever to be awarded the Pulitzer Prize for nonfiction writing.

During those years at Harvard, Ed and I conducted several research trips to Costa Rica to study the country’s rich population of ants. On such occasions, I experienced Ed’s enormous enthusiasm for the diversity of life, his tremendous knowledge of natural history, and most of all his unending drive as a collector.