Tiny Oysters Do a BIG Job 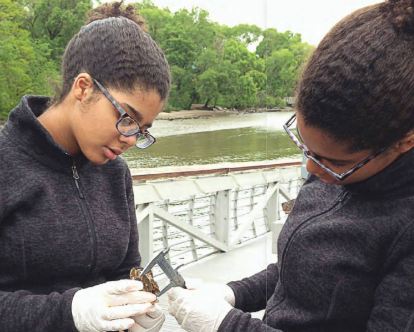 On a gray, windy day, 40 middle-school students stand on a pier over the Harlem River in New York City. They stare down into the brown water. Their teacher, Mr. Rodman, pulls a long, slimy rope out of the river. “Stand back!” he calls. Attached to the end of the rope is a metal cage. He swings it over the railing. Inside are clusters of small shelled animals—oysters.

Today, the students are also scientists. They are studying the growth of the oysters. The last time they were here, seven months ago, the oysters were babies. “They looked like tiny little pebbles,” says an eighth-grader named George.

The students’ job is to measure how much the oysters have grown and test the river water for pollutants. The students will report their findings to researchers at the Billion Oyster Project (BOP).

Why work so hard for oysters? To make the city’s waterways healthy again.

Oysters are mollusks, soft-bodied animals that have no skeletons. Slugs and snails are mollusks. So are clams and squid. An oyster is a type of mollusk that grows its own shell made of two oval-shaped parts that can snap shut for protection.