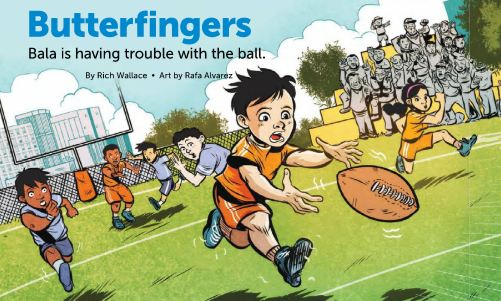 Bala is having trouble with the ball.

Bala took a deep breath of crisp autumn air. He wiped his sweaty forehead with the back of his hand and looked around at his teammates. “This is it,” he said. “Last play.”

“We have to score now,” Jamshed said. “It’s all or nothing.”

The Chargers trailed, 19–14. A win would clinch a spot in the touch-football playoffs. But they were 70 yards from the end zone.

“Ready!” Jamshed yelled as the teams lined up. “Hut, hut.”

Daksh hiked the ball and Jamshed dropped back to pass. Bala sprinted, then angled to the sideline. An Owls defender stayed with him but stumbled as Bala broke sharply toward the middle of the field.

I’m open, Bala thought as he ran. Jamshed’s pass arced through the air, perfectly timed. Bala stayed in a full stride as the ball floated down. Nothing ahead of him except 40 yards of grass and the end zone. A sure touchdown!

Bala stretched his arms and felt the ball on his fingertips. He gasped as he bobbled it and groaned as it slipped from his grasp. He lunged, but the ball dropped to the ground.

The Owls cheered as the referee blew his whistle. Bala stared at the ball. How did I drop that? he wondered.

His sister, Tara, trotted over and asked the same question. Then she put her hand on Bala’s shoulder. “Don’t worry.

We still have one more game.”

“Butterfingers!” someone shouted. Bala looked around, but he couldn’t tell who’d yelled.

Tara heard it too, and she shook her head. “Ignore it.”

“Great pass,” Bala said as Jamshed and the rest of the Chargers gathered. “All my fault.”