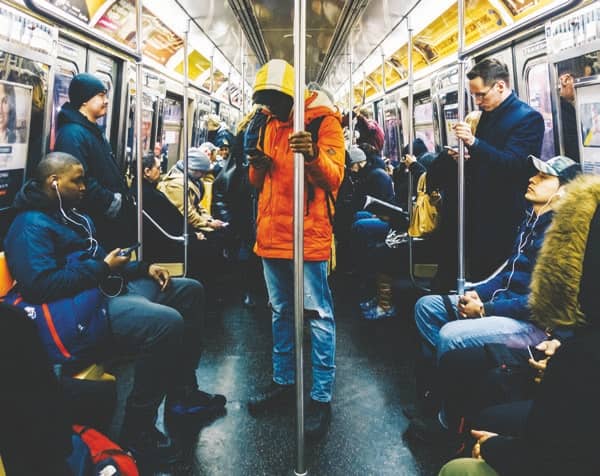 In some ways, New York City’s subway system is magical. You go underground, zip through dark tunnels, and come up again in a completely different place.

But the trains are no magic carpet. They’re more like bad-tempered dragons. They clank, they screech, they rumble, and sometimes they shoot out sparks. Passengers can get jostled around inside them. But they sure can cover the ground, and the city couldn’t run without them.

Adam of Brooklyn, New York, loves the subways. “I like them so much because I’m interested in maps,” Adam says. He knows all the different train lines, has ridden on many of them, and points out with delight that they can be confusing because “there are stops with the same name in completely different places, which is kind of weird!”

It’s spring break and Adam is on vacation. He will be our guide to the subway.

We leave Adam’s home early in the morning and walk to the nearest stop: 7th Avenue on the F line. Because the trains are underground, we get to the stop by walking downstairs from the street. We buy Metro-Cards at a machine and then swipe our cards through a slot at the turnstile. The card reader deducts one fare from each of our cards. Then we push through a metal gate. We’ve just entered the subway system. From this stop, we can ride all over the city. We can stay underground all day if we want to, without paying another fare.

Because it is morning rush hour during the workweek, the platform is crowded with people going to work or school. Trains arrive every 10 minutes, each one packed with riders. If each of those people drove a car instead of taking the train, how many more cars would be crowding the streets?

A train with a round orange logo roars into the station. It’s an F—our train. It screeches to a halt, and the doors slide open. Some people get off, but even more pile on. Adam and I squeeze into the very first car before the doors close.