Dig Into History Magazine for Kids and Teens|January 2018 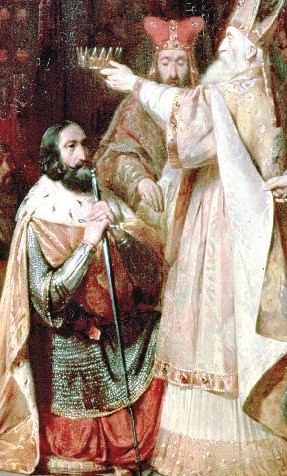 On December 25, in the year 800, the huge nave of St. Peter’s Basilica in Rome buzzed with Roman nobles, Frankish counts, and archbishops, bishops, abbots, and priests from many parts of Western Europe, all eager to witness an unprecedented event.

Contemporary accounts of the ceremony are surprisingly brief. The Frankish Royal Annals say only that as King Charles of the Franks and the Lombards rose after the opening prayer of the Christmas Mass, Pope Leo III placed a crown on Charles’ head (right). The congregation then cried out, in Latin, “Life and Victory to Charles, the most pious Augustus, crowned by God, the great and peaceful emperor of the Romans!” The pope then prostrated himself at Charles’ feet.

A descendant of barbarians and a man who was not even born a prince, Charles had become the first emperor in Rome in nearly 400 years.

After the Roman Empire crumbled in the late 400s, a Frankish chieftain named Clovis united many local tribes in Roman Gaul into a Christian kingdom called Francia. On his death, the territory was divided, as per Clovis’ instructions, among his four sons. In the decades that followed, the realm broke up into smaller, often warring, kingdoms.

By the early 700s, aristocrats serving Clovis’ descendants had become very powerful. One was Charles’ grandfather Charles, known as Martel (“the Hammer”) for his military prowess. As the king’s palace chief of staff, Martel reunited Francia and ruled as if he himself were king.