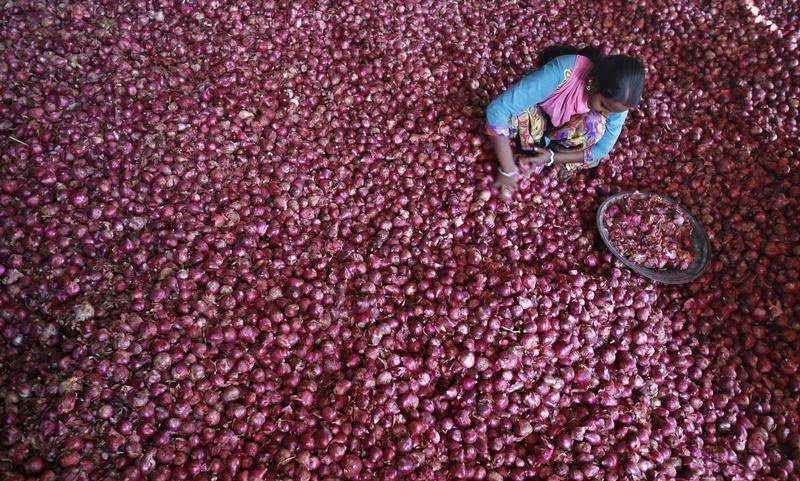 It's a vegetable with a sharp, distinctive taste. When we start to slice or chop it, tears flow freely from our eyes. Yet, we find it difficult to make do without this culinary star. Yes! We're referring to the onion, of course!

It's a vegetable with a sharp, distinctive taste. When we start to slice or chop it, tears flow freely from our eyes. Yet, we find it difficult to make do without this culinary star. Yes! We're referring to the onion, of course!

The onion is believed to have originated in Asia, though it is probable that onions may have been growing wild on every continent. Prehistoric people probably ate wild onions long before farming was invented. They must have discovered that onions were one of the few foods that did not spoil quickly, helped to quench thirst, and could easily be preserved for later use when other food sources were scarce. Onions were mentioned in the first dynasty of Ancient Egypt, around 3200 BCE, and were depicted and mentioned in tomb paintings and inscriptions from that time on. Some Egyptian paintings depict onions heaped on banquet tables. The ancient Egyptians worshipped the onion, believing that its spherical shape and concentric rings symbolized eternity. Therefore, onions were buried with Egyptian pharaohs. Archeologists discovered small onions in the eye sockets of the mummy of King Ramses IV who died in 1160 BCE, and onion bulbs were found in the tomb of the Egyptian boy king, Tutankhamen. Ancient Egyptian artists fashioned images of the onion in gold. Onions were sacred to the Ancient Egyptian falcon-headed god Sokar, God of the Underworld, so mourners at funerals wore strings of onions around their necks. Egyptian folk tales narrated how the milk teeth of Horus, the son of the god Osiris, fell to the ground, and turned into onion bulbs. In Ancient Egypt, a basket of onions was usually presented as an offering at a funeral. The Egyptians revered onions so much that public officials even took their oath on it, since they were thought to keep evil spirits away!

The popularity of the onion eventually carried it into ancient Greece, where athletes consumed large quantities because it would `lighten the balance of the blood.' Alexander the Great made sure that onions and garlic were in the diet of his soldiers, as he felt that it 'excited their courage.' Discorides, a famous Greek physician of the There are 325 species of onions, 70 of which grow in North America. The official state vegetable of Georgia is the Vidalia onion. The official state vegetable of Texas is the Texas sweet onion. • • • Around 300 BC, Chinese courtiers had to use cloves to sweeten their breath in the presence of the emperor because they ate so much garlic. 1st century AD, describes onions as being appetite and thirst provoking, and being useful in clearing the head when sniffed through the nostrils. Discorides even said that when rubbed on a bald head, onion juice had the power to cure baldness, and make lost hair grow back again!

MORE STORIES FROM CHILDREN’S DIGESTView All