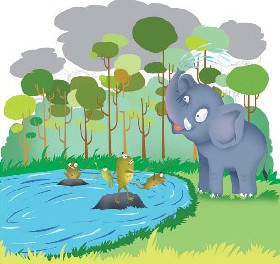 The frogs were busy making merry in the pond. They played all day long, splashed water on each other and croaked songs in the evening.

Manoj Roy
Freddy, however, was bored with these games. His friends called out to him several times, but he ignored them and stay put on a rock, contemplating other things he could do to keep himself entertained.

Freddy had an idea when he saw Hank, the elephant stop by the pond to drink water.

“Good evening, Hank! It is a good day, isn’t it?” Freddy greeted Hank cheerfully. his trunk with water and sprayed it over his body. “It has been a long time since I enjoyed such a refreshing shower.”

"Yes, indeed," replied Hank as be filled his trunk with water and sprayed it over his body. “It has been a long time since I enjoyed such a refreshing shower.”

“Hank, will you please give me a ride on your back?” requested Freddy.

“Of course,” said Hank, lifting Freddy by his trunk and seating him on his back.

“Wow! The pond looks so beautiful from this height!” exclaimed Freddy happily. He could see the entire pond and his friends frolicking in it. Freddy’s friends saw him on the elephant’s back and were astonished. 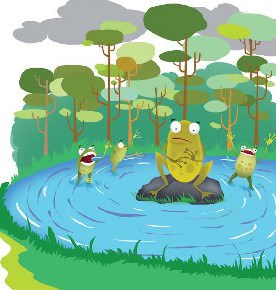