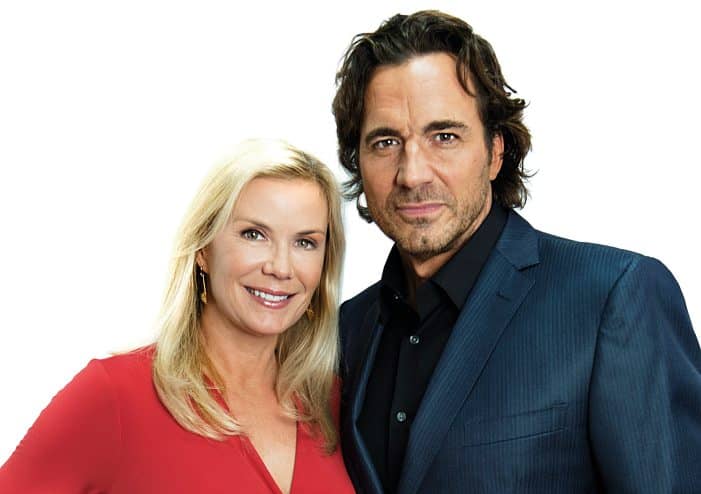 Brooke and Ridge’s union is once again on rocky grounds thanks her infidelity and his lying.

Ridge Forrester (Thorsten Kaye) and his wife Brooke Logan Forrester (Katherine Kelly Lang) are not for the first time facing marital dilemma. The one repeat factor is that it involves Brooke’s ex-hubby and Ridge’s enemy number one Bill Spencer (Don Diamont).

Bill lost custody of his son Will (Finnegan George) to his ex-wife Katie (Heather Tom) at the start of April, with Brooke being one of very few people in Bill’s corner. Not even the current object of his affection Steffy (Jacqueline MacInnes Wood) was there to support the shady businessman in court.

“It was a crushing blow for Bill and Brooke was the only person who saw his pain,” says Katherine. Brooke also discovered that her hubby Ridge had blackmailed the judge to side with Katie, who is her sister. But Ridge isn’t the only one in the wrong. When Brooke goes to check on Bill, he plants an unexpected kiss on her lips! Not once, but twice! And she doesn’t resist. “That’s enough warning bells to make it alarmingly clear that something isn’t right in Brooke’s marriage. Something is about to happen,” says Katherine.

While hiding her kiss, Brooke turns on the attack when she returns home, subjecting Ridge to a relentless interrogation, telling him that “you had better not be lying to me now as our future is on the line”. Brooke isn’t letting the blackmail go, leaving Ridge fearing that he could lose the woman he’s been in and out of love with during the past 30 years. Realising what’s at stake, Ridge confesses his role in where Will landed up in the custody case.

Flipping her cool, Brooke tears into Ridge about trust and love, only to let it slip that she visited Bill and he kissed her – twice. Raging, it’s Ridge’s turn to lose his temper and accuse his wife of infidelity. “You might have just broken our marriage!” he seethes at his wife.