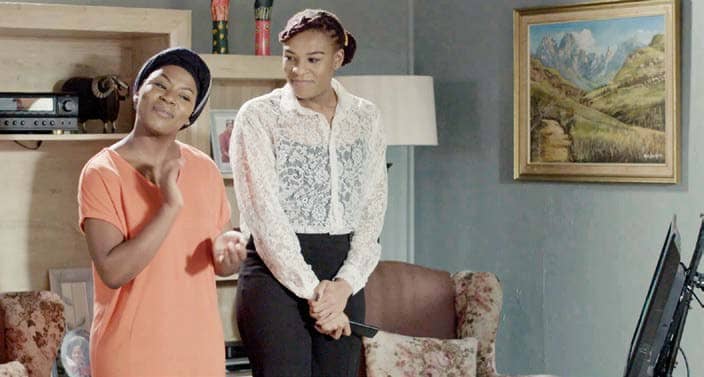 Wedding planning is a stressful time for any bride, but Khanyo (Nqobile Ndlovu) is about to tear her hair out. Ever since mid November, her beloved aunt MaZulu (Leleti Khumalo) and her darling mother kaMadonsela (Fundiswa Zwane) have quietly been at each other’s throats. If one makes her a special wedding book, the other “loses it”. If one picks a dress, the other spills something on it. The women who should be her biggest helpers cannot agree on so much as a fork. But when Khanyo took her issues to her fiancé Pastor Ndamase (Mlamli Ningiza), the cunning couple came up with a plan. On Tuesday 19 November, Khanyo presented the bickering duo with her new wedding planner: Lindo (Anathi Gobeni). Let the games begin!

“It’s a matter of mediating the situation. And what better way than to put a mirror in front of them (Lindo) so they see their mistakes?” explains Nqobile. And mischievous Khanyo has given Lindo permission to do whatever he pleases to get the point across to the two bickering hens. “Lindo is given free rein, as his character is known to understand people, making it easy for him to play with them,” she adds.

From now, Khanyo’s biggest struggle will be keeping a straight face. “That is very difficult,” admits Nqobile, “but she is reminded by the importance of her union to Pastor Ndamase to compose herself.” Well, Khanyo might try, but there are quite a few grins slipping out the moment her mom turns her back!