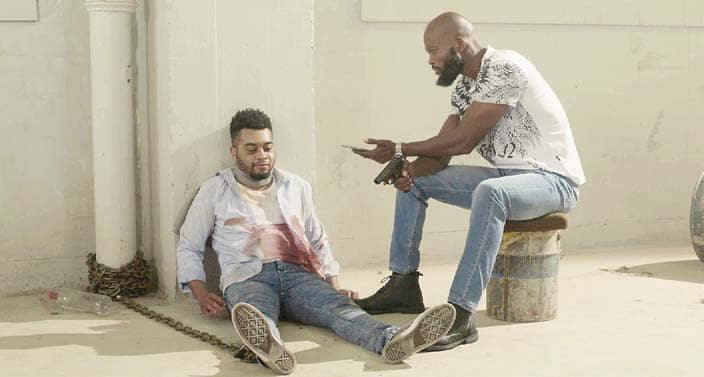 Zithulele’s disappearance is far more sinister than anyone realises – and it’s a comedy of errors thanks to his bumbling kidnapper.

A simple break-in to steal a phone turns into a ransom-hostage caper, all thanks to the backstabbing oil trade where there’s no such thing as nice guys. Maluju Oil heir Zithulele (Raphael Griffiths) has formed his own oil company to break away from his dad Ngcolosi (Tony Kgoroge), but their mutual enemy Sanil Maharaj (Jack Devnarain) wants to see them crash and burn. Maharaj has already arranged for Zithulele’s phone to be cloned to frame the businessman for insider trading. Now Sanil just needs his undercover lackey Shukela (Mondli Makhoba) to steal Zithulele’s phone from his apartment.

Zithu is completely taken by surprise when he gets to his apartment and finds Shukela there digging through his things. Zithu only knows “Shukela as the manager of Emsamo, who gives his bartending staff a hard time,” says Raphael. He therefore doesn’t think for a second that Shukela could harm him when he demands the phone. But then a trigger is pulled…