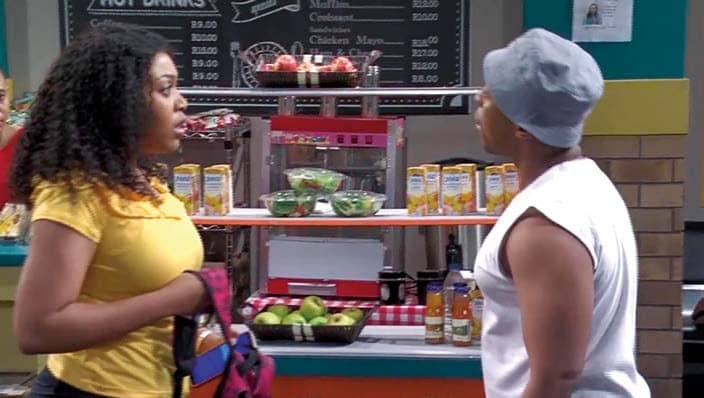 Pretty’s modelling dream turns into a nightmare when Nimza takes his ogling too far.

Sexual harassment and on-campus assault are topics that constantly make their way onto our online feeds and into conversations in the real world. Sadly, it usually isn’t long before the hashtag trends die down together with calls for protests. However, the Skeem production team are ensuring the conversation continues as they address on-campus sexual harassment in their latest hard-hitting storyline.

Viewers have witnessed law student Pretty (Lerato Marabe) take huge strides in the modelling industry over recent weeks. Granted, not everyone was supportive of her side hustle, least of all her conservative mom MaNtuli (Dieketseng Mnisi), but this wasn’t enough to deter Pretty. In fact, Lerato tells us that Pretty’s newfound fame is spurring her on even more. “She’s the centre of attention at varsity because of the ad campaign that she starred in,” Lerato explains.

But Pretty’s excitement about her racy swimwear shoot is shortlived when, upon closer inspection, she notices she looks very different in the ad. Lerato explains that unbeknown to Pretty, the ad agency photoshopped the snaps and Pretty feels they may have taken things too far. “She doesn’t really know how to feel about it,” Lerato says. “It’s public knowledge that models’ photos tend to get edited for any number of reasons, so it’s nothing new. But it breaks her heart that they made her look unreal. She feels that she’s selling the wrong idea to the public.” Despite her uncertainty, Lerato assures us that Pretty is still proud of what she’s accomplished. After all, it is a career-making gig.