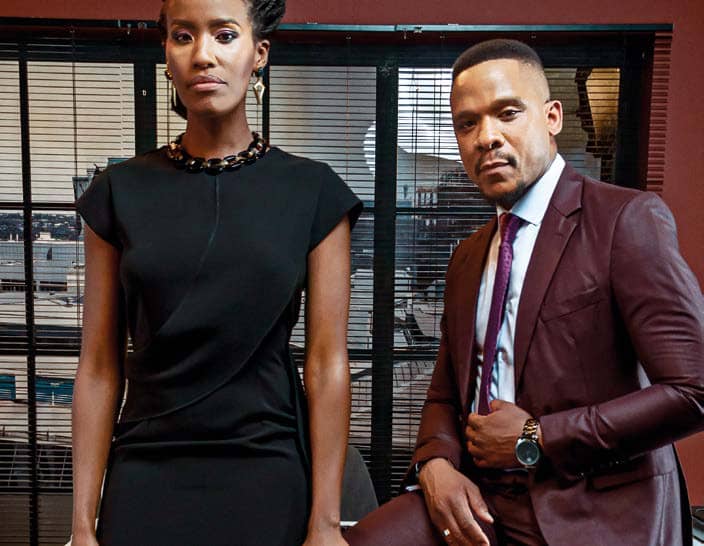 When Mthunzi and Thembeka put their wicked minds together, can anyone stand in their way?

Thembeka (Masasa Mbangeni) might have refused an alliance with Mthunzi (Bongile Mantsai) when he first approached her, but when he lays out his top-secret plan for her this fortnight he is determined to map out for her how their two apparently different paths can twist together – and guide them to their goals. For Thembeka, that would mean winning back Quinton’s (Brighton Ngoma) heart, while for Mthunzi it’s seizing back control of the Thebe-Langa firm – a company he believes to be his birthright since the Langas destroyed his father’s life during the apartheid era.

And let’s face it, these two need each other’s help. After Thembeka’s fiancé Quinton dumped her in early February for not telling him her doctor’s news that she wasn’t dying after all, she seems to have lost any chance of getting near his heart ever again. As for Mthunzi, he snuck back into town in January this year, but the Langas would be fools to ever trust him again after finding out that he tried take over Thebe-Langa by secretly kidnapping and then killing head of the organization Siseko Langa (Hlomla Dandala) in 2018 and claiming that Siseko sent him to watch over them.

But Mthunzi, the master manipulator, had also better watch out because working with Thembeka won’t be as easy as he anticipates. These two devious minds are a match made in hell!

But if Thembeka could somehow become Mthunzi’s insider at ThebeLanga, Mthunzi could get a foot back in the door. And if Mthunzi wiggled his way into an association with Quinton – who’s desperate for cash to launch his own business – perhaps he could slowly work on manipulating Quinton back into Thembeka’s corner…

“These two characters are in a similar situation. We are both working for something,” says Bongile. “Mthunzi wants to help Thembeka – but with him getting what he wants. There is a thing that I call the GOTE in drama:

G stands for goal, O stands for obstacles, T stands for tactics and E stands for expectations. So these two characters have GOTEs to attend to, but they also have hurdles,” says Bongile, adding that while Thembeka and Mthunzi have their own tactics, they could definitely use the other’s devious ways too.