On the mother hand… 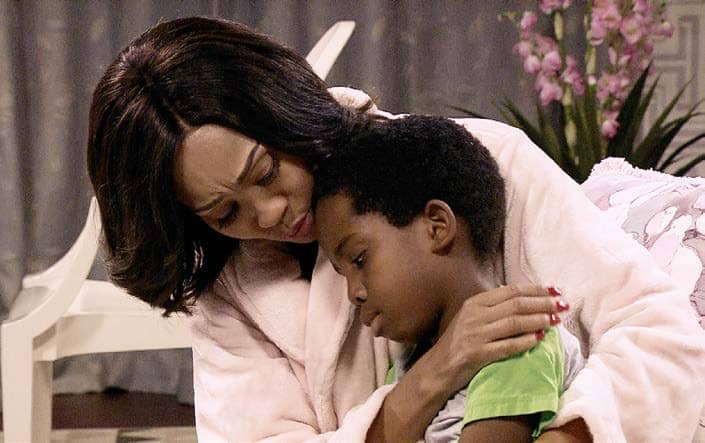 Two sides of Yvonne Thebe are at war. Maleeto wants to keep Tebello, but Yvonne wants to run away.

Following the death of her mother MaBetty (Francina Maili Morake) on Valentine’s Day, Yvonne Thebe (Kgomotso Christopher) is at a crossroads. She is caught between staying the self-involved Yvonne that she’s been as long as we’ve known her, or becoming Maleeto – the name and identity that was her childhood past and could still be her future. It’s a choice that will change more than her own life: the fate of the little boy named Tebello (Litlhonolofatso Litlhakanyane), who was in MaBetty’s care, is now in her hands.

Scandal! fans have been flooding social media pleading for Yvonne to adopt the irresistible, innocent Tebello for months, but a war is raging between Maleeto and Yvonne. There’s a cruise ship already at the dock and a ticket with Yvonne’s name on it, and Yvonne is ready to say, “It’s been fantastic, it’s been lovely to get my maternal side but I kind of have to go on a boat now”. Kgomotso adds, “She has done the best that she could have done. She has been wonderful, she has been caring, but her life needs to move on now.” But she won’t. Not if Maleeto still has something to say about it!

“Which Yvonne is going to win this new chapter?” asks Kgomotso as she explains her character’s inner debate. “Yvonne is back at The Newtonian, her life has got to move on. But there is the Maleeto side, which is now attached to this child. Tebello has given her a chance to see a different, caring aspect of herself. So when Yvonne is back, the issue actually becomes, ‘So do I give up everything? Do I give up this dream (the cruise life) to stay home and take care of this orphan who needs me?’ And she swings between the two positions, feeling that it is as if her mom is literally still making her life a mess from the grave. So there is still that Yvonne that we know. But she is battling. Yvonne is leaving. Maleeto finds it difficult,” explains the actress.