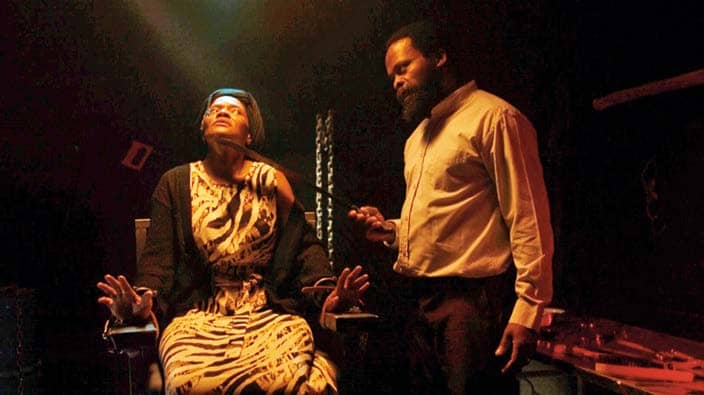 Khathaza fills those coffins as his twisted feelings for MaNgcobo take over.

Khathaza’s (Sibonile Ngubane) mission was simple – if a bit twisted – when he arrived in KwaMashu with his sister Fihliwe (Phumzile Mlangeni) in May this year. The sharp-dressed coffin salesman had vengeance in mind. He knew that crimelord Nkunzi (Masoja Msiza) had burnt his and Fihliwe’s mother to death way back when, and Khathaza also believed that Nkunzi had murdered their brother Steleka (Mduduzi Mnguni). Nkunzi would be punished. Nkunzi would be humbled and destroyed. And then Nkunzi would die.

But from the moment that Khathaza sought to humiliate Nkunzi by taking away every good thing in his life, starting with his wife MaNgcobo (Dawn Thandeka King), he’s had the reins yanked right out of his hands. Because once Khathaza fell in love with and married MaNgcobo himself, his head wasn’t in control anymore, his heart was. And his heart has led him to terrible choices, to the point of even killing his own sister in late November to save MaNgcobo. Now in the first week of December, as romantic obsession, betrayal of his own blood and vengeance go to outright war within Khathaza’s mind, his insanity will flood over the women of KwaMashu.

IN FOR THE KILL

In early November, Khathaza felt deeply conflicted after he discovered that MaNgcobo – not Nkunzi – murdered Steleka. Khathaza was torn between his murderous rage towards MaNgcobo and a very real love for her as his wife. And we held our breath as he questioned MaNgcobo about how she had felt after the killing, whether she had been proud or happy. Instead, MaNgcobo – then unaware that Steleka was Khathaza’s brother – expressed remorse and regret. Her only justification was that she had killed to protect her man. Already head-over-heels for his wife, that confession cemented Khathaza’s devotion to MaNgcobo and clamped down any desire that he had to kill her for murdering his brother. “It felt authentic, the way she expressed herself. Khathaza didn’t have a thing of killing Mangcobo anymore,” insists Sibonile. Perhaps not consciously, but Khathaza’s subconscious mind is in an ugly tangle.

IN THE NAME OF LOVE