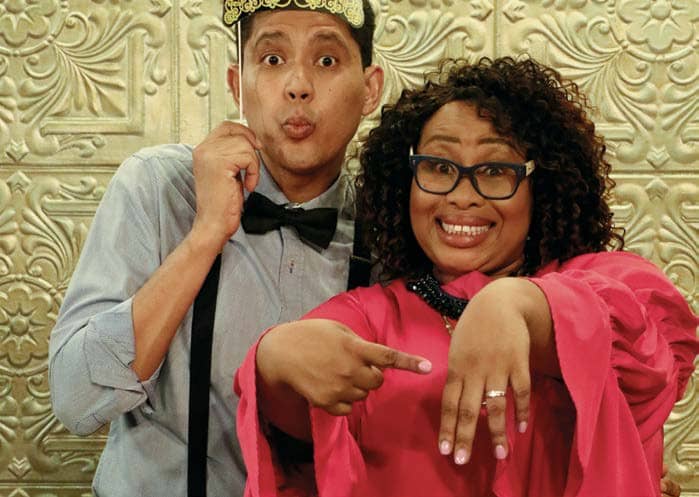 Valentine’s Day is extra special this year with Vince and Aggie’s wedding party.

What better day to celebrate love than Valentine’s Day? And that’s exactly why Aggie Ngwenya and Vince Meintjies (Mimi Mahlasela and Jacques Blignaut) promise each other their love on that day. Plus, it’s a bonus hour-long episode on Friday 14 February as the Thursday episode is making way for the president’s State Of The Nation address. But back at the wedding that was actually filmed in November 2019. “I think that it’s a beautiful thing to get married on the day that the world celebrates love,” says Mimi.

Jacques explains that the wedding isn’t just about Vince and Aggie, the Meintjies family are going through a difficult patch following the recent death of Xander (Theodore Jantjies). “Vince believes that this will bring some hope to the family and muffle the pain of Xander’s passing.”

Not that it’s easy for Vince, who is still trying to process losing his brother.

“It still hurts him in the quiet times,” Jacques shares. But Vince feels that he is honoring his brother by using some of the money that Xander left Vince in his will for the wedding. “It would have made Xander happy,” adds the actor. And Jacques thinks that this is the real deal for Vince, unlike his first marriage to Bonita (Hildegardt Whites) from 2012 to2018. They were already separated in 2017 when it was revealed that she was carrying Xander’s child. But what makes Vince so sure of this love? “Aggie and Bonita are very different,” says Jacques. “Bonita has a lot of luggage from her past that she carries around, which is why her outlook on life is bleak. Aggie has a much more positive outlook and that’s what Vince needs in his life. She makes him feel that they can do anything and that’s why they will stay together.”