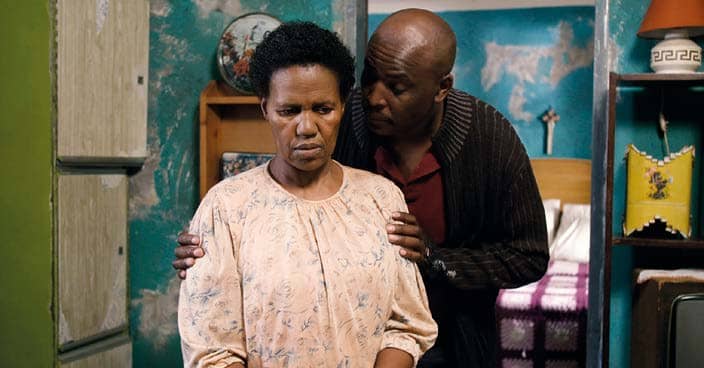 Patricia’s world is an out-of-control rollercoaster when ailing Spokes continues drinking and behaves like a boar.

Mild-mannered mom Patricia (Sibongile Nojila) had her life shattered in March this year when her estranged husband Spokes (Mnatha Vika) returned after a decade of abandonment. And it wasn’t a happy reunion, as his boozy habits steamrollered back into her life. “His health deteriorated but his behaviour was worse,” says Sibongile. It’s beyond abhorrent. “How can he do this? He is drunk and forces himself on her. How can he do this?” asks Sibongile. Worse: he collapses dead while raping her.

Stunned, Patricia doesn’t know what to do. “Her world stops at this moment. She never expected him to die like this,” says the actress. She never actually had a bad wish for him in her body despite his non-stop drinking. Even his abuse years earlier, beating her, has been forgiven to an extent, explains Sibongile. “Pat is a Christian, an honest and sincere woman and she had given Spokes support (in April) when he promised to clean up his act. She never wanted to see him being haunted by his drinking demons again.”